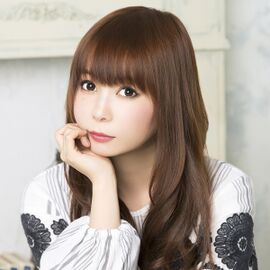 Official website
Official blog
Twitter
YouTube (Music)
YouTube (Gaming)
“
I used to feel like I was living in my own little world in front of the computer, but I found out that I was really connecting to people. This is how I was able to realize my childhood dream of being a positive person who can encourage others, so I feel like words have a lot of power. I’m so happy to read comments from my followers in the U.S. and other countries who want to see what I’m doing. I really want to stay connected with everyone!
”
—Shoko Nakagawa, 2019 Nekopop Interview[1]

Shoko Nakagawa (中川 翔子, Nakagawa Shōko) is a Japanese TV personality, singer, actress, voice actress, cosplayer, writer, illustrator, and animator. Her nickname is Shokotan (しょこたん). In Japan, she is also famous for her extensive use of speaking with custom slang derived from 2ch

, which is known by her fans as Shokotanese (しょこたん語, Shokotan-go). In western countries, she is mostly known for performing the two opening themes of Gurren Lagann

and her bizarre photos.

Shoko is the daughter of Katsuhiko Nakagawa

, a celebrity actor and musician in Japan in the 1980s, who had stylistic elements similar to David Bowie

. As her father died in 1994, Shoko was mainly raised by her mother in Nakano, Tokyo

. Shoko's legal name is actually Shiyōko (しようこ), although she has been using Shoko for most of her life. As Shoko and her mother had to remain in the hospital after Shoko's birth, her maternal aunt had to register Shoko's name in the family registry. Her mother intended to name her "Shōko" (薔子) but it was declined due to the character 薔 being forbidden for names in Japanese law. Her aunt instead wrote the name in hiragana with a large よ (yo) instead of its smaller combining form, ょ.[2]

When she was five years old, Shoko appeared in the Japanese television series, Chikyu Sentai Fiveman

, which aired in 1990. She later made her debut in the entertainment industry in 2001 when she was 16, winning the Grand Prix award at the Popolo Girl Audition[3] and representing Jackie Chan

's talent agency. In 2002, she was chosen as Miss Shōnen Magazine

In 2004, Shoko appeared in a brief section of Kangaeru Hito ("People who think") on the Fuji TV

network as an illustrator. She made a guest appearance in the 38th episode of Tokusou Sentai Dekaranger

. She also performed on the Japanese variety show, "Men B". 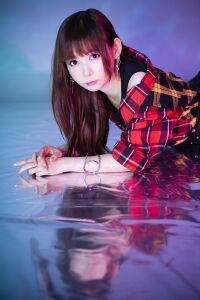 In early 2005, she started appearing regularly on a later version of Kangaeru Hito, named Kangaeru Hitokoma ("Thinking about one frame [of a cartoon strip]"). For one year starting in May 2005, she appeared as a regular on the TBS

program "Ōsama no Brunch".[3] Some of her work was shown on the May 11, 2006, edition of Downtown Deluxe on the Nippon TV

network. She was a member of the judging panel in the "Jump Damashii" section of Shueisha's Weekly Shonen Jump, starting from Jump Issue 13 in 2006. On May 30, 2006, she revealed in the show Kasupe! that she likes the manga Kachō Shima Kōsaku

, that Shoko had pretty "grown-up tastes". In July 2006, she released her debut single "Brilliant Dream". It ranked 29th in the Oricon

chart, with initial sales of 6313 copies.

reported that her blog had been accessed one billion times.

at the Los Angeles Convention Center

.[3] In 2009, she appeared in a series of commercials for Norton AntiVirus

Shoko has several albums and singles of her own songs. She has also appeared in idol DVDs, written books about herself, and acted in Japanese films and dramas. In April 2020, she created a gaming YouTube channel. 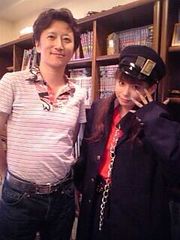 Shoko is a huge fan of JoJo's Bizarre Adventure and especially loves Jotaro Kujo. She cosplays as various characters from the series and mimics their poses.

From 2006 to 2008, Shoko became a regular host on the Japanese information program, Tameike Now. She would wear various cosplay outfits in each episode. In an August 2007 episode titled I Want to Receive the World's Best "JoJo's Bizarre" Lessons, Shoko wears Jotaro's clothes and visits the office of Hirohiko Araki for an interview. Shoko asks Araki who could defeat Jotaro's Stand, and Araki jokingly states that the child of Jotaro and Shoko could. The two then draw a hypothetical child of Shoko and Jotaro. Araki draws their son, Jo Kujo, with the Stand named Love Note. Shoko draws her daughter with Jotaro, Jokotan Kujo, with the Stand named Gigant Stomach.[5]

In 2014, she released "TOKYO SHOKO☆LAND 2014 ~RPG Teki Michi no Kioku~," her sixth cover album featuring the anime's first opening, JoJo ~Sono Chi no Sadame~. In the same year, Shoko broke her coccyx (tailbone) while recreating the pose of Narancia Ghirga during a live concert. Despite her fracture, she continued with her concert and then went straight to the hospital afterwards. It was her first bone fracture. In the past she had performed with gastroenteritis and inflamed vocal cords so she felt this was no different.[6]

Shoko has voiced minor characters in every Pokémon

movie since 2007. She has been a regular host in various Japanese Pokémon television programs, including Pokémon Sunday, Pokémon Smash, Pokémon Get☆TV, and Meet Up at the Pokémon House?. For the Pokémon Sun & Moon anime, Shoko joined the staff as an animator, stating it had always been her dream to be part of the animation team.[7]

In 2019, Shoko performed the song "Kaze to Issho ni" (風といっしょに) with Sachiko Kobayashi

, which was used as the theme song to the film Mewtwo Strikes Back: Evolution

. It is a cover of a song originally performed by Kobayashi, used as the theme song to the 1998 film Pokémon: The First Movie 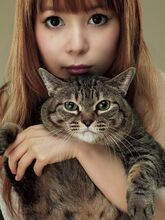 Shoko has a cat named Mamitas who she adores. She also has her own fashion store in Shibuya named MMTS (MaMiTaSu). In total, she has ten cats at home as of 2019 because she feels she has to adopt them when she sees a cat in a bad situation.[1]

Neko no Ashiato is an autobiographical essay book written by Shoko which is based on her life and her family. The series depicts the slapstick comedy of 10 idiosyncratic cats and the folks in the unusual Nakagawa family.

It was adapted into an anime named Omakase! Miracle Cat-dan (おまかせ！みらくるキャット団, Omakase! Mirakuru Kyatto-dan, "Leave it! To the Miracle Cat Group") in 2015. Shoko performed its opening theme along with Haruomi Hosono