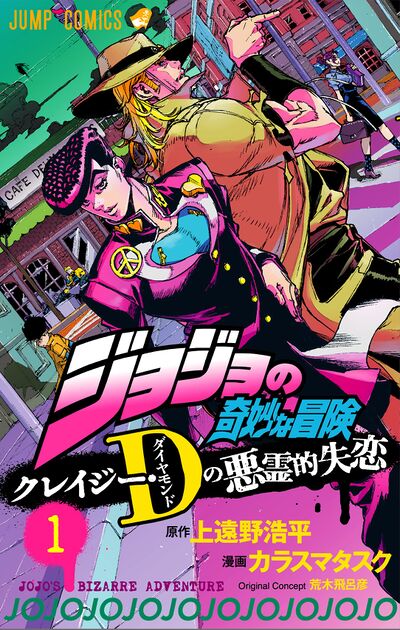 JoJo's Bizarre Adventure: Crazy Diamond's Demonic Heartbreak (ジョジョの奇妙な冒険 クレイジー・の悪霊的失恋, JoJo no Kimyō na Bōken Kureijī Daiyamondo no Akuryō-teki Shitsuren) is a spin-off manga written by Kouhei Kadono, author of Purple Haze Feedback, and illustrated by Tasuku Karasuma, author of No Guns Life. It is the first official JoJo's Bizarre Adventure spin-off in a manga format that is not illustrated by Hirohiko Araki.[1]

The story is set between Stardust Crusaders and Diamond is Unbreakable. A decade after DIO's death, Hol Horse accepts a request from an old acquaintance's mother to find and bring back her missing parrot, who was raised with Pet Shop. He travels to Morioh with Boingo after seeing a prediction from Tohth, where the two encounter Josuke Higashikata and Ryoko Kakyoin. The four of them are psychologically tortured by illusions of DIO's presence and memories of the past, due to the parrot's Stand and a mysterious assailant. 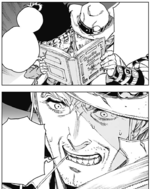 In Cairo, Egypt, March 1999, an elderly woman asks Hol Horse to find her missing parrot. The woman is the mother of an animal trainer who notably owned Pet Shop but had been killed by DIO. Since the parrot was trained alongside Pet Shop, there is the possibility that it is a Stand User, so the Speedwagon Foundation might try to eliminate it. Hol Horse accepts the old woman's request out of kindness.

After a heated meeting with fellow ex-agent of DIO, Mariah, Hol Horse enlists Boingo in his mission to find the parrot. Using Tohth's power of prediction to divine their path, Hol Horse and Boingo see that they must go to Morioh, Japan.

In Morioh, a young girl named Ryoko pays her respects to Noriaki Kakyoin's grave. It is revealed that she is Kakyoin's cousin and that she saw DIO when she was younger but somehow escaped from him. On her way back to university, she finds Tohth and reads DIO's name inside. Realizing that it must have some importance, Ryoko takes the book. On the streets, Hol Horse witnesses a car driven by a possessed man surging towards him. Reminded of DIO and paralyzed by fear, Hol Horse is saved by Josuke Higashikata's intervention. However, Josuke sees Hol Horse's Stand Emperor.[4] Initially wary of each other, Josuke and Hol Horse nonetheless become acquainted as fellow Stand users. Guided by Tohth's predictions, Ryoko also meets Hol Horse and Josuke.[5]

Meanwhile, Ryohei Higashikata talks to Boingo at Budogaoka Police Station and learns about his predicament: Boingo had dropped Tohth somewhere and got lost while searching for it. Ryohei asks his co-worker, Karaiya, to take Boingo back to his hotel. Josuke and Ryoko start on the wrong foot since she implicitly insulted his haircut and Hol Horse has to get between them. Josuke and Hol Horse asks whether she has seen Boingo. Hearing about Boingo's comic book, Ryoko decides to keep Tohth secretly with her until she finds out the cause of Noriaki's death. After Hol Horse leaves to ask about Boingo's whereabouts at a police station, Josuke and Ryoko argue again. As Tohth predicts, Ryoko eventually slaps Josuke. Meanwhile, Hol Horse falls under the control of the parrot's Stand.[6]

Ghosts of the Past 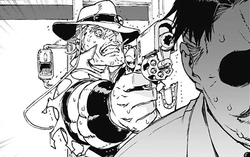 Hol Horse is forced to reenact a meeting he had with DIO a decade ago. However, he luckily escapes the ability's clutches before he hurts someone when he sees something that reminds him of Kakyoin instead. Then, a group of knife-wielding women controlled by the parrot's Stand cause a commotion in the street. The chaos is observed by a mysterious figure who is the real culprit behind the parrot's attacks, and he reveals the parrot's name to be Petsounds.[7] Fortunately, Josuke and Hol Horse manage to stop the chefs. After the battle, Hol Horse explains the truth about the Stand attacks to Josuke. Ryoko eavesdrops on them and hears the name "DIO". She realizes that she's getting closer to the truth, but Tohth ominously warns her to look for a fuse and to ignite it to find the answer to her questions while everyone is screaming.[8]

Petsounds replays a memory of rioters being shot by a helicopter

In his hotel room, Boingo ponders on what Tohth predicted. The book itself told Boingo to leave it to get over his fear of DIO. Meanwhile, Hol Horse and Josuke talk in a subway station to avoid the parrot. Nonetheless, the crowd in the station is forced to relive a memory of a mob being mowed down by a helicopter, causing chaos. Worse, an attacker hidden in the crowd is shooting at them with a crossbow. Seeing a kid being hurt by a crossbow bolt, Josuke angrily snaps out of the memory.[9] Hol Horse also overcomes the memory and helps Josuke apprehend the crossbow wielder, and Hol Horse seemingly shoots down Petsounds.[10] It is revealed that the crossbow wielder is a mere thug under the thumb of the real culprit, Kazuki Karaiya, a policeman working in Morioh with Ryohei. Karaiya is the grandson of a Vampire created by Kars and he's been raised to think he was fated to stand over the rest of humanity.[11]

All that is seemingly left for Hol Horse, Josuke, and Boingo is to find Tohth. Josuke remembers he saw the book in Ryoko's hands and thus, he confronts her about it. With nowhere to run, she reveals that she can't give the book back yet because she is trying to find out the truth about what happened to her cousin. She tells Josuke about how Noriaki became a servant to DIO ten years ago and then mysteriously died.

Meanwhile, Karaiya captures Boingo. A dispute between Josuke and Hol Horse ensues about Ryoko keeping Tohth, as Hol Horse wants it back immediately while Josuke wants to give Ryoko time to find the answers to her question. Josuke traps Hol Horse in a dumpster, and then he and Ryoko eventually run away. However, Ryoko also runs away from Josuke. While struggling with her inner conflicts, Ryoko finds out that she is the metaphorical fuse Tohth showed her. The stress of wanting to learn the truth about Noriaki gets to her, giving Petsounds the chance to possess her with a memory. Karaiya soon comes to pick up Tohth, and he reads he needs to give Ryoko a gun to shoot a hole right through Hol Horse's head.[12]

The Servants of DIO

Hol Horse manages to free himself from the dumpster. Reminiscing about the aftermath of his defeat against the Joestar Group, Hol Horse remembers he witnessed Noriaki's final moments and praises Noriaki for having overcome his fear of DIO. 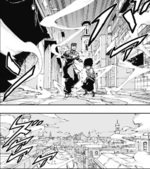 A few minutes earlier, Josuke is looking for Ryoko. Drawn into the construction site of an unfinished building, Josuke discovers too late that Petsounds is still alive. Josuke is lured into a trap as he approaches Boingo, tied and disguised as Ryoko by the enemy. After Josuke sees the person is Boingo and not Ryoko, Petsounds's Stand plays a memory of Petsounds's trainer being murdered by DIO and Pet Shop in Egypt. Josuke relives the memory as the trainer, and experiences the illusion like he's really in Egypt.[13] Josuke and Boingo are forced to live through an attack by DIO and Pet Shop. The latter shoots them with icicles and also douses them with gas to light them on fire. The sheer pain threatens to kill them but Josuke manages to escape the memory by choking himself and Boingo with a rope so the asphyxiation snaps them back to reality. 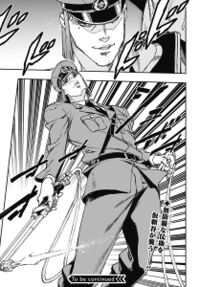 Karaiya with a cutting torch

Shocked at them being alive, Karaiya grinds his teeth in anger wondering what kind of ability Josuke has. Karaiya internally thinks about how he's given the parrot a piece of his earlobe, linking their souls together. Thus, they share the same Stand but with Karaiya's knowledge and willpower guiding Petsounds's attacks, empowering them at the same time.[14]

Josuke and Boingo meet with Hol Horse, and Josuke tells him the parrot is still alive. However, they split from each other trying to pursue what appear to be Petsounds flying down the stairs as well as Ryoko running up the stairs. Going down, Hol Horse sees that he's been tricked by a paper model of a bird. He also sees Ryoko, still possessed and with a gun in her hand, about to shoot herself. Meanwhile, Josuke reaches the roof. There, he is placed into another illusion, this time reliving Daniel J. D'Arby's encounter with DIO. Reliving how DIO utterly terrified D'Arby into submission, Josuke is unable to escape the terror he feels. While Josuke is defenseless, Karaiya appears behind him with a cutting torch.[15] 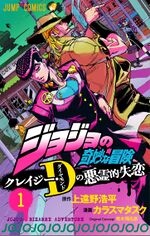 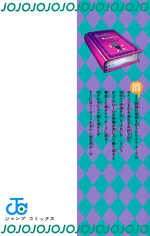 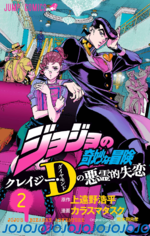 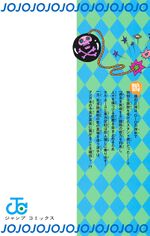 In France, an officially translated version of the series will be published in September 2023 by Delcourt/Tonkam.

Ultra Jump reported that as of December 2022, the series reached over 300,000 copies in circulation for its first two volumes, including print and digital copies.[21][22]