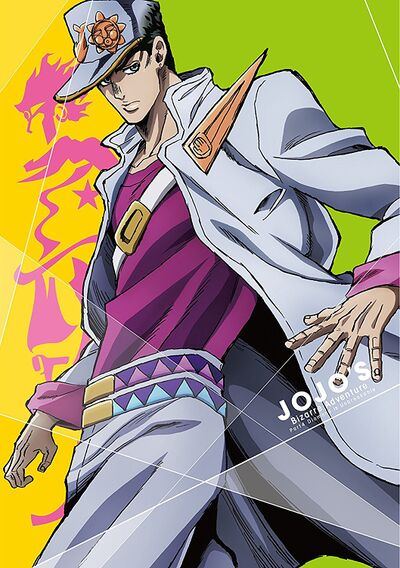 A Ghost Story from Budogaoka High (ぶどうヶ丘高校の怪談, Budōgaoka Kōkō no Kaidan) is the first episode of the Diamond is Unbreakable Drama CD Collection released within the 6th volume of the limited edition Blu-Ray.

Taking place a few days after Rohan Kishibe's Adventure, Okuyasu begins by telling a ghost story to Josuke and Koichi. The story tells that years ago, at Budogaoka High School, there was a young girl who loved to play the piano and was exceptionally skilled at it. However, one day she was in a car accident, and while she survived, her hands were paralyzed, and she could never play the piano again. Not long after, on a rainy night, the girl committed suicide by jumping from the music room's window on the school's fourth floor. A few days later, a music teacher heard a piano playing late at night; then a phone rang with the sound of rain falling coming from it and eventually a voice that said, "Let me play the piano."

Josuke tells Okuyasu to knock it off with his random ghost stories, while Koichi genuinely believes the tale. Okuyasu goes on to say that the story is real and that a student named Owada encountered the spirit while retrieving supplies the other night. Josuke and Koichi decide that after Reimi's reveal of a serial killer loose in Morioh, they should investigate anything suspicious, even if it is just a ghost story. The following night, the gang meets up at the high school to investigate. Josuke asks Okuyasu for the flashlights, which Okuyasu mistakes at first for a banana, as he had brought snacks in case they became hungry. Okuyasu suggests using only one flashlight, as using all three would cause the school to lose its spooky atmosphere.

As they navigate through the school, Josuke discovers a large puddle of water and thinks it might be from the ghost. Okuyasu suggests smelling the water, as it might be leaking from the restrooms nearby. Okuyasu proceeds to comment about Josuke's new shoes, which he states he bought using his father's money after his old ones were ruined while helping Jotaro hunt rats. Okuyasu then complains that he wishes he had the kind of money Josuke has, which prompts Josuke to tell Okuyasu to enter the lottery jokingly. Koichi reveals that he spotted a silhouette behind Josuke while he was talking. The gang begins to act nervous as they move their way through the school. Okuyasu comes across an anatomical model, stating that there always has to be one included in a haunted house. The gang hear footsteps coming from above them, prompting Koichi to remember Yukako from earlier. Josuke mentions he spotted Yukako spying on Koichi the other day, which causes Koichi to defend her, stating that she isn't the same anymore and that she doesn't have any other friends.

As the footsteps become more prominent, they begin to hear piano music. The trio moves up to the fourth floor to investigate the music room, only to hear a girl fall from the window. They discover that there aren't any bodies below the window, causing them to relax. Koichi then states that this could very well be the ghost after all. Josuke hears the ghost going back down the stairs to the school's entrance. Annoyed at being made a fool of, Josuke punches his way through several walls and floors to use as shortcuts on the way down. He catches up to the ghost, barely punching it with Crazy Diamond before the ghost escapes. Josuke slips on the puddle from earlier and catches his breath while Okuyasu and Koichi catch up.

Meanwhile, it's revealed that the ghost isn't a ghost after all, but Surface disguised as Junko. Toshikazu Hazamada has been tricking the trio the whole time to get back at Josuke for defeating him and landing him in the hospital. Surface remarks that the entire plan seems unfair towards Josuke's friends, who had nothing to do with their defeat, especially Koichi, whom Hazamada regards as a friend. Hazamada disregards Surface's words, saying that Koichi and him just share a bond due to their interest in Rohan Kishibe's manga and nothing more. Hazamada instructs Surface to continue the ghostly charade, calling Josuke on the phone and talking as if he was the ghost girl. He then sees three flashlights in the distance and picks up the phone on standby to prepare to prank Josuke, but he begins to hear dripping and sloshing from the receiver.

Hazamada becomes scared, only for Josuke to surprise him from behind. Josuke reveals that when he kicked the ghost from earlier with Crazy Diamond, a small splinter came off, revealing the ghost as Surface. Josuke "healed" the splinter and followed it back to Hazamada's position. Koichi appears and reveals that he used Echoes to place the "drip drip" noises on the phone, which Hazamada heard. Confused, Hazamada asks who was carrying the flashlights, to which Josuke reveals it was Okuyasu, The Hand and the anatomical model from earlier. Later on, Okuyasu scolds Hazamada for his prank while Koichi lets him off the hook, saying that Hazamada’s prank was harmless compared to his previous actions. Josuke argues that making a story about a student who committed suicide just to prank them is licentious. Hazamada defends himself by clarifying he didn't make it up and that she really existed, and all he did was borrow the story from his cousin who went to the school ten years ago. Josuke dismisses him, still thinking he's lying, but suddenly the group begins to hear actual wet footsteps. Josuke asks Hazamada if it's just Surface‘s trick again, but he is told otherwise. The wet sounds stop, but then Koichi notices a black shadow that looks like a long-haired girl standing right behind Josuke, which then, in a creepy feminine voice, asks if she can play the piano. This causes everyone to flee from the high school in fear, and they all agree never to visit the place at night again.