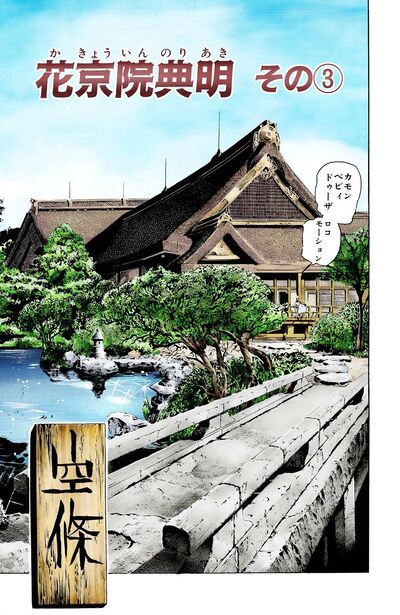 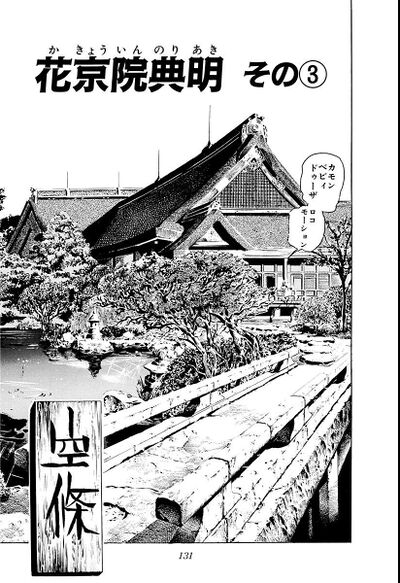 Noriaki Kakyoin, Part 3 (花京院典明 その③, Kakyōin Noriaki Sono 3), originally DIO's Curse (の呪縛, DIO no Jubaku) in the WSJ and tankobon releases, is the seventh chapter of Stardust Crusaders and the one hundred twentieth chapter of the JoJo's Bizarre Adventure manga.

While doing the laundry, Holy says that it feels like her son is nearby as if Jotaro is thinking about her at school. Just then, she is startled when Jotaro walks behind her with Kakyoin on his back. He asks where his grandfather is, and Holy says he's in the tea room. As Jotaro walks away, Holy complains in her head that Jotaro never talks to her about anything. However, he turns back and asks if his mother is okay because she isn't looking too well. Holy is relieved that her son truly cares about her and happily says that she's fine.

In the tea room, Joseph says that Kakyoin is doomed to die in a few days because of a flesh bud attached to his brain. Avdol and Joseph explain that the flesh bud is made out of DIO's cells and is used to control the minds of his victims with his charisma.

Avdol tells Jotaro how he first met DIO, four months ago in Egypt. He barely avoided the same fate as Kakyoin. Avdol was able to escape only because Joseph had already warned him about DIO before, and his familiarity with the area allowed him to hide. Jotaro refuses to let Kakyoin die and begins to remove the flesh bud with his Stand, despite being told not to by Joseph and Avdol because it would be dangerous.

The flesh bud reacts and digs a tentacle into Jotaro's hand in order to get to his brain. Jotaro manages to remove it in the nick of time and Joseph destroys it with his Ripple. When Kakyoin regains consciousness and asks Jotaro why he risked his life for him, Jotaro says that he doesn't know why himself.

Author's Note
“
It takes me 20 minutes to get to the train station from work. I haven't been exercising lately so this is actually very tiring for me.
”
—Hirohiko Araki
“
仕事場から駅まで20分もかかる。これがけらこう疲れる私は、かなり重症の運動不足
”
—Hirohiko Araki