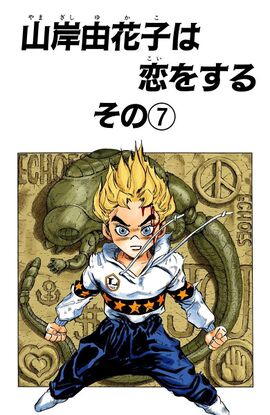 Koichi, looking at the petrified Echoes, believes that it has died out and he despairs, not noticing that the shell is crumbling. However, Yukako sees the shell revealing another Stand inside and tries to enter the house. She manages to destroy the furniture blocking the door and enters the house, but whatever was inside the shell has disappeared. Angered, she questions Koichi about where he hid the object in the shell, but Koichi doesn't know. Both look up and see another form of Echoes.

Yukako is initially unimpressed, but she suddenly feels a violent whirlwind propelling her out of the house and above the cliff. Yukako manages to grab a tree with Love Deluxe, but is confused about what happened. Meanwhile, Koichi sees that on the door Yukako was leaning against, Echoes has planted the sound "Whoosh" with the tip of its tail. He understands that his Stand has evolved into a more powerful form, and, encouraged, dubs it Echoes ACT2.