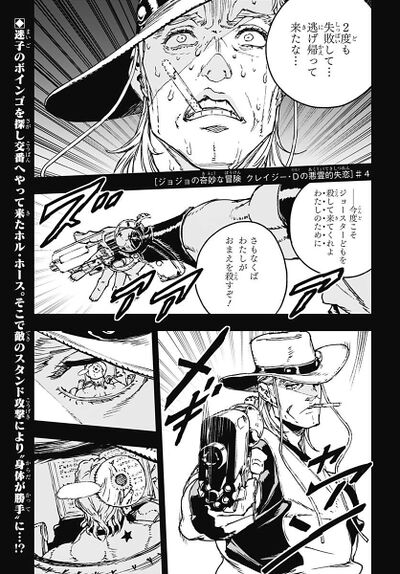 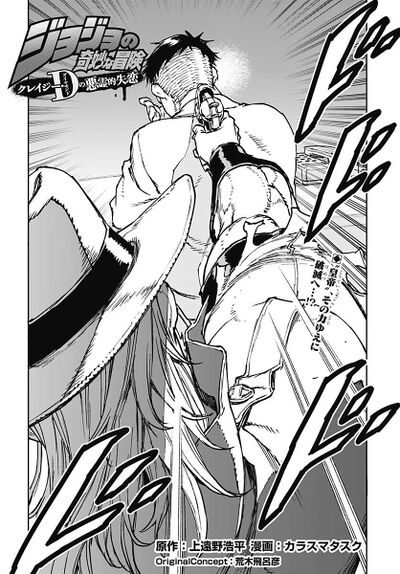 Hol Horse continues hearing DIO's voice due to the parrot's Stand ability, forcing his body to hold Emperor behind Hiraoka's head. He realizes that the bird is making him reenact his own events from when he heard DIO's words ten years ago. However, he also knows that he didn't end up pulling the trigger back then due to his fear, so as long as he hears DIO say "Are you really trying to shoot me?" again then his finger should stop pulling the trigger like last time. Suddenly, Hol Horse notices two sparkling cufflinks on Hiraoka's sleeve when a pedestrian signal behind him flashes green. The green light and the sparkling cufflinks evokes a memory of Hol Horse seeing Hierophant Green's Emerald Splash technique in the skies of Cairo when Noriaki Kakyoin was fighting DIO. At the time, a bandaged Hol Horse and Boingo were running away on the street when they saw the numerous Emerald Splashes above them.

Focusing on the different memory allows Hol Horse to escape from the Stand's grip and he pukes out the Stand's punched cards. After Hol Horse escapes from the police station, Hiraoka turns around thinking he heard someone behind him. Hol Horse surmises that someone must have stolen the parrot to make use of its power, since the parrot hadn't caused any trouble in the ten years since DIO died until now. Just then, a group of four female chefs from a pastry shop walk out of their store, each holding knives. One of them slashes the neck of an elderly woman who had just arrived to pick up her order. Walking as if they're in a trance, the women all exclaim that they're offering everyone's blood to DIO. Hol Horse can't ignore ladies being used as tools and other women being killed right in front of him so he gets himself involved.

One of the women stabs Hol Horse in his side. Hol Horse is impressed that the bird could control more than one person at a time. He discerns that these chefs must be reliving the actions of people who gave themselves up as food for DIO. However, he also realizes his dilemma as he's up against an enemy he can't simply shoot with Emperor. Meanwhile, a mysterious figure watches the battle with the parrot perched on their arm. Intrigued by the discovery of other Stand users being in the town, they declare that they'll show the real power of the parrot, revealing its name to be Petsounds.

(Mentioned only) (Photo only)
Pet Shop