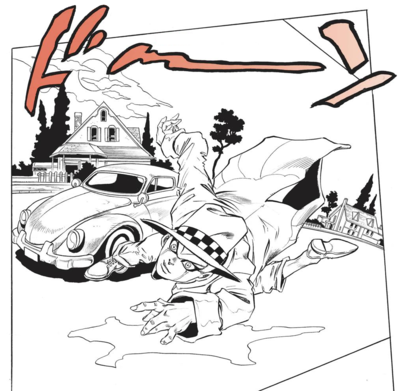 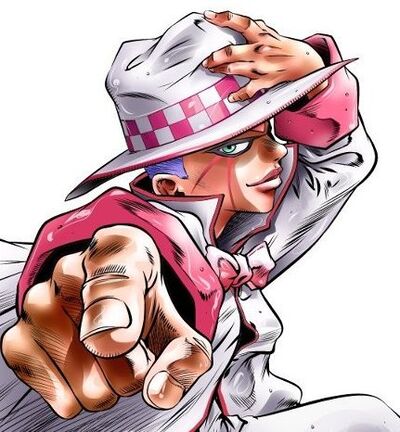 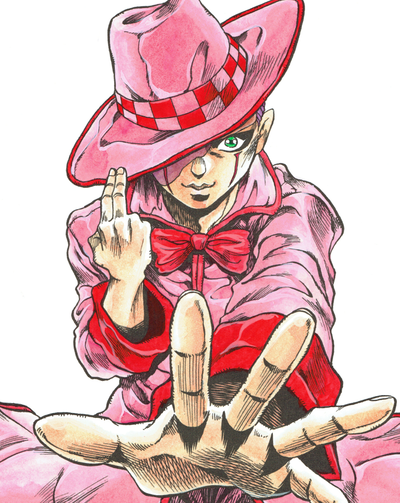 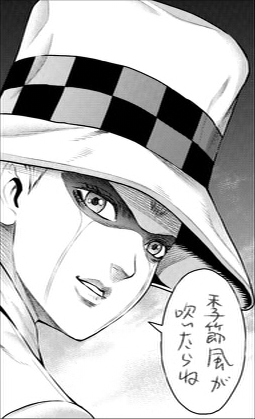 Many characters in the series are fans of the manga, including Koichi Hirose, Toshikazu Hazamada,[1] Tamami Kobayashi, and Akira Otoishi.[2] 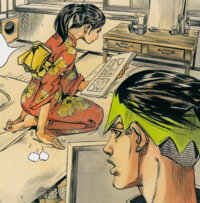 Rohan starts drawing pages of Pink Dark Boy when he is seventeen years old in 1996, planning to submit the pages in a competition for young manga artists. His story had no girl in it because the theme had nothing to do with women, but an editor told Rohan to add attractive women. Thus, Rohan starts drawing Nanase Kishibe in his manuscript.

Nanase admires his work at first, but after seeing that he drew her, she suddenly becomes enraged and stabs the page over and over. Nanase soon disappears and Rohan starts his manuscript again. He submits it in September, and by the end of Fall, his story is serialized.[3]

Although the plot and setting of Pink Dark Boy are unknown, Koichi Hirose states that it is a suspenseful horror manga that could be grotesque at times but has thrilling scenes and realistic characters.[1] After Josuke Higashikata injures Rohan, the manga switches to a monthly schedule.[4]

The manga has also been published overseas in Taiwan and Europe. Joseph Joestar asks if he ever considered making an English version but Rohan explains that there isn't one yet because "the Americans have bad taste".[5]

Rohan gets mixed opinions on the work in his fan letters. Some letters say they love it and read the same chapters at least ten times a week. Others say the art looks weird, or that looking at the art irritates them and they hate the colors.[6]

In the live-action film, Koichi owns twenty volumes of the series and has a poster of it.[7]

Yo-Yo Ma gives Jolyne Cujoh a volume of Pink Dark Boy which it stole from the guards' break room at Green Dolphin Street Prison, implying that Pink Dark Boy is sold in America in 2012.[8]

Following Rohan's battle with Josuke, Pink Dark Boy goes on hiatus for the whole summer while he investigates Yoshikage Kira. When Kira is defeated, Rohan later travels to Italy as research for a new development in his story and spends eight days in Venice.[9] Pink Dark Boy possibly involves supernatural elements since Rohan decides to investigate a yokai legend for a manga he was working on.[2]

In the TV drama, there are at least 81 volumes of the book published. Rohan had just started Part 8 of the manga one month prior to the first episode.[10]

Pink Dark Boy is a favorite of manga fans around the world. There are countless reasons for its popularity, such as the manga's unique and strong characters, and several famous lines of dialogue and onomatopoeia that make people want to imitate them. Most importantly, the manga provides a sense of "reality".

By depicting things that Rohan himself saw and experienced, Pink Dark Boy could provide the best entertainment. When the protagonist faces a horrific enemy, the reader's skin crawls. When food is introduced, the reader can not only smell it, but even taste it. Fans see the characters as objects of admiration rather than fictional beings, and even their way of life is changed after reading.

When two kids in the library read Pink Dark Boy, one of them mentions that although there are a lot of volumes, the contents of the volumes are different. They're all different stories which are interconnected.[11]

In the year 2000, Koichi reads Rohan's comment in an issue of Weekly Shonen Jump which reveals that Pink Dark Boy is ending the third part of its story and will soon be entering its fourth part. Koichi states that it is a manga with attractive characters, characteristic onomatopoeia, and cool poses of the characters on the covers. Rohan later reveals to Koichi that he already has nine parts in total planned for the manga despite the fourth part not starting yet. He finished the entire plot of Part 9 including the dialogue, with the only thing left to do being to draw it all into manuscripts.[12]

The 37th universe's Rohan Kishibe also creates a manga named Pink Dark Boy. As of 2012, it had been running for twenty years, and had recently started part eight.[13]

On April 19, 2016, Ultra Jump co-sponsored the first Ultra Comic Award event with the digital magazine Ashita no Young Jump. The theme of the event was for participants to create their own version of Pink Dark Boy, based on what they thought it would be like. The genre, character design, and number of pages were completely optional, with no need to resemble Rohan's protagonist. The deadline was until midnight on June 30, 2016. The results were announced on August 19, 2016, in the September 2016 issue of Ultra Jump.[15]

37 works were entered in the contest. Unfortunately, none won the grand prize of 300,000¥. However, there were two winners for the second prize of 100,000¥, along with a special Rohan penholder and a Tosho card (prepaid card for buying books) loaded with 10,000¥. There were three honorable mentions who each won 50,000¥ and a Tosho card loaded with 10,000¥. They also created a special "Expectation Award" for five works which had good qualities but were a step short of winning the main awards, who each received 10,000¥.[16]