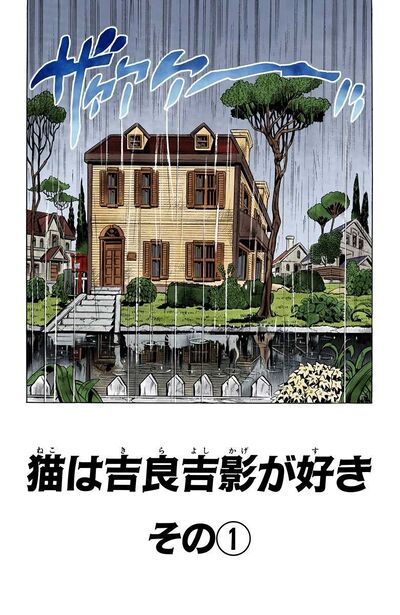 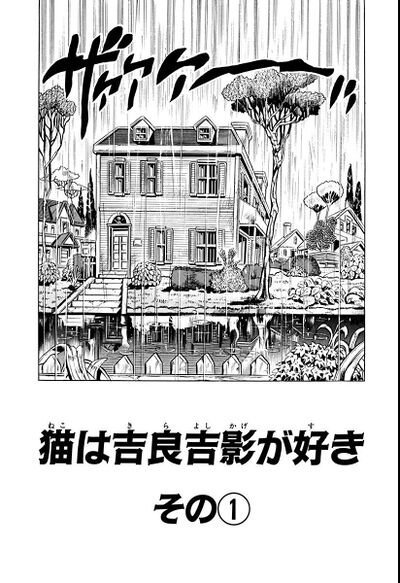 Kira discovers that Kosaku's shoes are too big for his feet, and he is determined to slowly replace each pair of shoes a few at a time so that he is not caught. Just then, Shinobu barges into the room in a panic and jumps onto him, fearing something in the basement.

Kira's hands tremble as he has the urge to strangle her, but Shinobu continues explaining what she saw. She had gone to the basement to get more bottled water when she spotted a British Shorthair cat she had never seen before sitting on a sack of potatoes. As an attempt for the cat to get closer to her, Shinobu tried a bunch of silly antics to appear more submissive to the cat, but it just ended up glaring at her before it started grooming itself. The cat's actions made Shinobu angry so she tried throwing a brush at it, but the cat swatted it away with its tail. When Shinobu grabbed a broom to try shooing the cat out of the house, the cat hissed and jumped onto the ceiling. That's when she noticed a large hole in its neck and she went berserk trying to hit the cat with the broom, out of fear.

Suspicious about the cat being hit by an arrow, Kira decides to check out the basement; only to find that the cat was dead. He states that Shinobu must have broken some bottles, as glass shards were stuck in the cat's throat. Shinobu freaks out at the thought of her killing an animal and screams while Kira tries to calm her down. He then buries the cat's body in their backyard, unsure of whether the cat was a Stand user or if the hole was a coincidence from the shards of glass.

The next morning, an unusual flower with eyeballs sticking out blooms from the cat's grave.