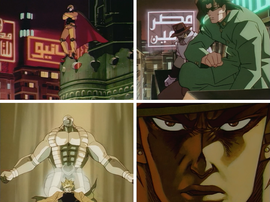 DIO's World: Kakyoin -Duel in the Barrier- (DIOの世界 -花京院 結界の死闘-, DIO no Sekai -Kakyōin: Kekkai no Shitō-) is the twelfth episode of the JoJo's Bizarre Adventure OVA. It adapts Chapter 250 through Chapter 256 of the manga.

Night has fallen on Cairo. Joseph and Kakyoin drive through the streets of Cairo, ignorant of Jotaro or Polnareff's location. They discuss the incomprehensible power of DIO's Stand and Joseph expects DIO to come for him soon. True enough, DIO hijacks a car and forces Wilson Phillips, an American senator and owner of the car, to drive it.

Meanwhile, Jotaro has splintered his broken rib and is confused by DIO's power. Nonetheless, he is determined to fight the Vampire. DIO and Philips eventually catch up to Joseph's truck. Kakyoin sends Hierophant Green out to attack DIO but he easily resists the Emerald Splashes. DIO summons his Stand, The World who sends Hierophant flying with a single punch. Thankfully, Joseph speeds through train tracks, making DIO crash into a train, the Vampire is still unscathed.

During this reprieve, Kakyoin says that The World is very similar to Star Platinum but is still confused by it. The corpse of Wilson Philips then flies into the truck, making it crash. Joseph and Kakyoin must then flee on the rooftops. Nonetheless, Kakyoin has an idea to force DIO to reveal his power. After pursuing Joseph for a while, DIO finds himself surrounded by strings made of Hierophant Green shooting emeralds from all direction. When Kakyoin performs his all-out attack, DIO uses The World to stop time. That way he easily evades the projectiles, cuts through the barrier and punches the man in the stomach.

Kakyoin is sent flying into a water tank. Agonizing from his wound, Kakyoin understands the power of The World and due to his wounds, is forced to tip Joseph by destroying a clock tower. Kakyoin subsequently dies. While he flees, Joseph finally understands Kakyoin's message and also guesses that DIO cannot stop time for long but DIO attacks and makes him fall. Joseph incidentally meets Jotaro but DIO stops time and sends a knife into Joseph's throat. As he heals his ancient wounds, DIO's time stop increases in length. Angered, Jotaro advances to fight the Joestar Family's archnemesis. 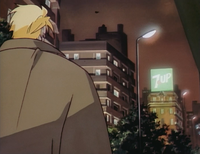 16 Minutes & 38 second into the Episode when Joseph & Kakyoin are hopping between rooftops, a 7-Up

Sign can been seen. Studio A.P.P.P. added this to remain authentic to how Cairo's billboards were in the 1980s.