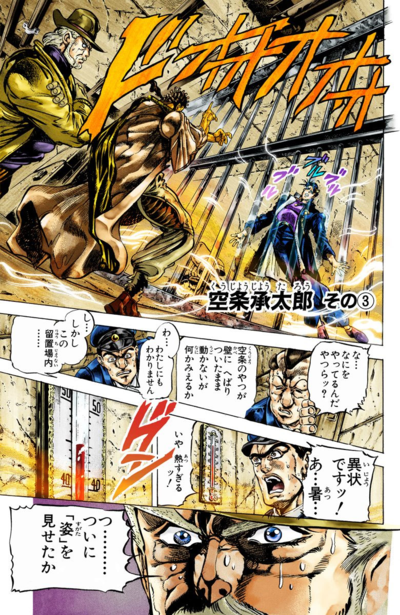 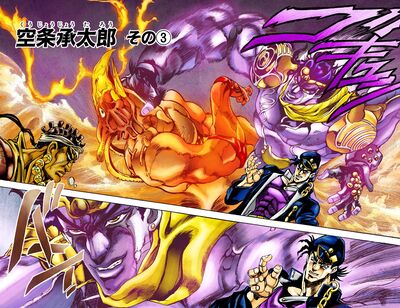 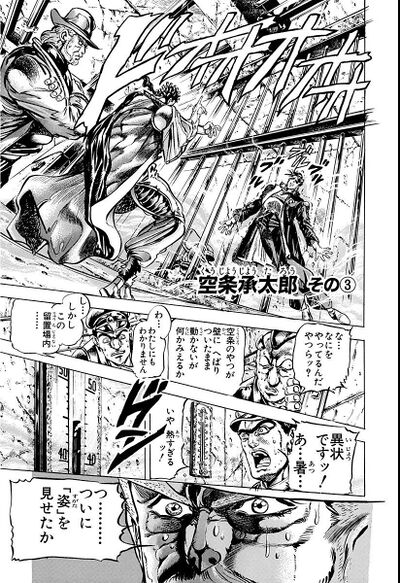 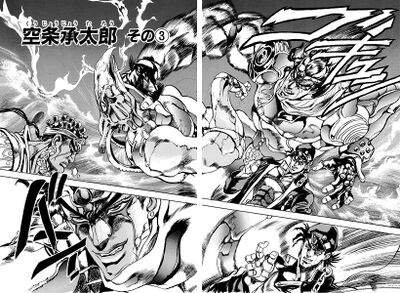 Despite not being able to see the spirits, the guards gape at the new, abnormally-high temperature of the room, caused by the flames of Magician's Red, unknown to them.

Meanwhile, Jotaro's evil spirit can be seen fully for the first time and grabs Magician's Red by the neck. This causes an identical marking to appear on Avdol's own neck, implying that damage to someone's evil spirit reflects on its user. Jotaro asks his grandfather if he knows what the spirit is, to which Joseph replies that he does, adding how Jotaro's appears to be quite strong in fact. To avoid his neck breaking, Avdol unleashes a "Red Bind", which pins Jotaro to the front of the cell by wrapping flames around his mouth and stomach in a rope-like form.

Jotaro exclaims at his inability to breath, and his spirit starts to fade. Joseph takes this opportunity to explain the true nature of the evil spirit, explaining it is not an "evil spirit", but a powerful image created by Jotaro's own life force. According to Joseph, since the spirit stands beside its user, it is referred to as a Stand.

Avdol taunts Jotaro with a quote from Aesop, but Jotaro responds with a death threat, followed by smashing the nearby toilet with a kick that causes an eruption of water. With the flames now extinguished, he uses his Stand to rip out two bars from the cell's entrance and approaches Avdol. The police once again marvel at the 2 bars seemingly bending in mid-air. However, before Jotaro can strike, Avdol turns away, retreating his Stand. Jotaro stops his attack, confused, and Avdol explains that he had no longer needed to fight as Jotaro has successfully left his cell. He tells an impressed Jotaro how he was initially planning to hospitalise him, which Jotaro questions by asking how Avdol would have stopped the bars from piercing him. Avdol claims that his Stand could have melted the steel in mid-air, but Joseph ends the conversation, urging the party to finally head home.

With his new understandings of his "evil spirit", Jotaro no longer needs to quarantine himself, and instead inquires Joseph for how he knows of Stands. The old man shows a picture of the previously shown steel chest that was lost for a century, adding that he determined it came from the ship where his grandfather, Jonathan Joestar, had died many years ago. Joseph reveals that Avdol and he are chasing the man who escaped from the chest, the vampire DIO, who had now awakened after a century of sleep. It is the destiny of the Joestar Family to fight this living incarnation of evil.