VIZ Media, LLC, headquartered in San Francisco, California, is a major American anime, manga and Japanese entertainment company formed by the merger of VIZ, LLC, and ShoPro Entertainment. The company is commonly referred to as "Viz", the same name used in previous incarnations of VIZ LLC.

The company is currently jointly-owned by Japanese publishers Shogakukan and Shueisha, and licensing house Shogakukan-Shueisha Productions (ShoPro), a Shogakukan subsidiary.

In the past, Viz has produced several manga related magazines including Animerica; the English version of Shueisha's Weekly Shonen Jump (shonen manga), and a shojo manga monthly called Shojo Beat.[2]

Since then, the company now offers an integrated digital product line of Weekly Shonen Jump and graphic novels, while continuing to license and distribute physical copies of manga and anime.[1]

The manga was licensed in English and released in monthly chapter issues by VIZ Media in 1990. As it was financially unsuccessful, it was not until 1995 that it was re-released in a volume format.[3] This section requires expansion. 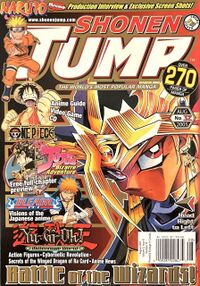 VIZ Media produces and distributes the English localization of the JoJo's Bizarre Adventure manga and as of February 2015, has been named the North American master merchandise licensee for the JoJo's Bizarre Adventure series.[4] The company oversees the licensing and development of a comprehensive range of products based on the celebrated supernatural/action/adventure anime property across several key consumer categories.

The third part of the series, later titled "Stardust Crusaders", was first previewed in English in the August 2005 issue of Shonen Jump magazine, the American counterpart of Weekly Shonen Jump.[5] Aside from using different title fonts, the biggest difference about this release was the inclusion of English sound effects.[6] While this was a very common practice among VIZ's English releases--even including their release of Baoh the Visitor--this was something they would neglect to include in future releases. Starting in 2005, the entirety of Part 3 was released every other month, however possible low sales forced the company to cut it down to a quarterly release schedule,[2] which pushed its conclusion to December 2010. One interesting aspect of VIZ's initial skipping of the first two parts of the series, Phantom Blood and Battle Tendency, equating to volumes 1-12 of the original Japanese publication. To compensate for the lack of story material explaining the events of those volumes, VIZ put together a special chapter, adding different panels from Part 1 along with an explanation of Part 1 to the beginning of the first volume,[2] as well as taking the final chapter of volume 12 and adding it to the Japanese volume 13 to make the US volume 1. Due to this skipping of Parts, VIZ initially presented Part 3 as simply "JoJo's Bizarre Adventure," acting as if the Japanese volume 13 was the official start of the manga and labeling it "Volume 1". This remained the norm in America for JoJo, continuing until the series eventually went out of print and official US Volumes became semi-rare.[2] In May 2014, Viz announced that Stardust Crusaders would be receiving a reprint to coincide with the anime release at the time.[7]

On June 9, 2014, VIZ announced that they would be publishing the first two parts of the series using the hardcover JoJonium editions from Japan. Starting in Late 2014, the localized volumes were released on VIZ's website, starting with Part 1: Phantom Blood.[8] The release consisted of a digital-first platform with the print editions to follow in 2015. The covers of the previously announced reprints of Stardust Crusaders now include the subtitle "Part 3 - Stardust Crusaders" on the cover, restoring that portion of the story to its proper chronological place.[2] On July 6, 2018, VIZ announced at their Anime Expo Panel that they would be publishing Part 4 of the manga, Diamond is Unbreakable.[2] Though the look would be different from the JoJonium's previously used format, as those stopped publication at Part 3 of the series. However, the "Deluxe Hardcover Editions" still kept the aesthetic of the series, as well as be published in the same way the JoJonium's were prior, with each volume containing two volumes of the part. Notably though not featuring exclusive artwork illustrated by author Hirohiko Araki on its cover. It retains however the original Tankobon cover artwork instead, for the front and the back. Volume 1 of Part 4 released on May 6, 2019, with the final volume releasing on May 4, 2021.[2] On October 20, 2020, VIZ announced that they had licensed Part 5 of the manga, Vento Aureo,[9] and would be published under the name Golden Wind as per the title used for its anime adaptation. It would receive the same Deluxe Hardcover Edition treatment and was published following the release of the final Part 4 volume that next spring. Volume 1 of Part 5 released on August 3, 2021.

As of April 2016, VIZ currently streams the entirety of Diamond is Unbreakable on it's digital anime service. At Anime Expo 2016, the company confirmed release of all current seasons, starting with Part 1 (Phantom Blood and Battle Tendency) on Blu-ray Disc.[10][11]

In order to avoid lawsuits, some of the character's names were changed in the localization, mainly either being carried over from, or to All-Star Battle, Eyes of Heaven and/or Crunchyroll subtitles of their Anime series after 2014. Some by alternating part of their names while others were completely changed. In 2013, a Facebook post was made from VIZ briefly talking about JoJo with how the media Araki references within the story is from either fashion, music or real people. The problematic ones of the two are fashion and music, as licensing for just even the namesakes can be hard to afford/acquire, VIZ referred to it being a "lawyer's nightmare". So instead VIZ uses "copyright free" names as an official English substitute.[12]

In the original 2005 Stardust Crusaders release, a few scenes involving animal death were changed. In the Yellow Temperance fight, a panel in which a dog lost its head was changed so that, while the dog still died, it wasn't as bloody. In the Death Thirteen fight, the death of another dog was changed in which, instead of a dog, it was a rat.

In the 2022 digital version of Stone Ocean, the inking on one of the female inmates has been altered, and the banana she is eating has been redrawn into a sandwich to avoid allusions to racial caricatures and Blackface.