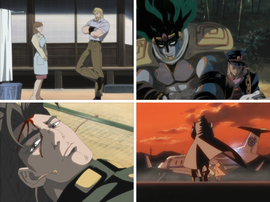 Hierophant Green (ADVENTURE2 法皇の緑, Adventure 2 Haierofanto Gurīn) is the second episode of the JoJo's Bizarre Adventure OVA. It adapts Chapter 117 through Chapter 122 of the manga.

In his shadowy lair, DIO mentions that Jonathan Joestar's corpse was a boon as it allowed him to survive at the bottom of the ocean. However, it now represents a weakness because the link between Joestars granted the members of the Joestar Family Stands at the same time as him. However, his confidante Enya tells her master she's taken dispositions to murder the Joestar.

In Japan, Joseph already notices the first symptoms of Holy's affliction. For his part, Jotaro is heading to school accompanied by his groupies. Jotaro sees a suspicious man in front of him and follows him into the forest. A fight ensues between Jotaro and Noriaki Kakyoin, wielding Hierophant Green. Jotaro is wounded but is angered at Kakyoin's callousness toward a nearby girl. Jotaro's Stand powers through the Emerald Splash and pummels Kakyoin, defeating him.

Afterward at the Kujo's home, the heroes examine Kakyoin and discover a flesh bud, through which DIO can control people. Avdol reminisces his terrifying encounter with DIO. Determined to save Kakyoin, Jotaro uses Star Platinum to extract the flesh bud and Avdol uses Magician's Red to destroy it. However, Holy then falls unconscious because of DIO's curse and the group learns that DIO is still in Egypt. To repay his debt, Kakyoin decides to accompany the group. The four men then prepare to go to Egypt, and Avdol christens Jotaro's Stand "Star Platinum". Unbeknownst to them, they are followed by someone and DIO is also feeling the group's impending arrival.