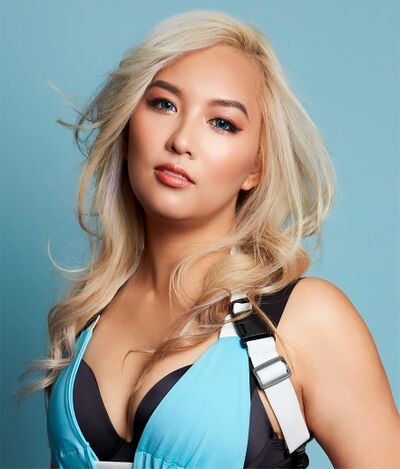 https://www.fayemata.com
@FayeMata
Faye Mata is an American voice actor. She is notable for her work as the voice actor for the character Yukako Yamagishi in Diamond is Unbreakable's English dub.

She is also well known for her roles as Aqua in Konosuba, Astolfo in Fate/Apocrypha and Petra in Fire Emblem: Three Houses.[1]

Faye Mata was born in Wisconsin, United States. During her youth, she originally began her passion for voiceover work while hearing characters interacting with each other in various videogames, notably Starfox 64, as well as doing impressions to entertain her younger siblings. She briefly did theatre through school as well. Eventually, Mata began to join online fandom communities and helped collaborate on unnoficial fan-productions where she would often participate and lend her voice. It helped that there was a noticeable lack of available female voice talent online during that time.

Eventually Mata would go to join several idol contests at Anime Expo, testing out her impressions, but often getting eliminated in the first round several years in a row. In the end, she eventually moved to California where she began to take voiceover more seriously. This would lead to her eventually meeting her longtime future voice director, Tony Oliver.

Not long afterwards, Mata eventually began to abandon her dream of voiceover and instead went on to earn a degree in Biology. Upon chance, however, while with some friends at another Anime Expo, she joined a voice acting competition hosted by Bang Zoom Entertainment and unexpectedly came out as one of the winners. She later received a call back from the studio, which resparked her passion for voiceover.

After several missed opportunities and constant feedback, Mata eventually hit her stride in voiceover and continues to work with various studios and productions to this day.[2][3]

Mata also does regular streams on her Twitch channel and is a partnered content creator with Panda Global.[4]