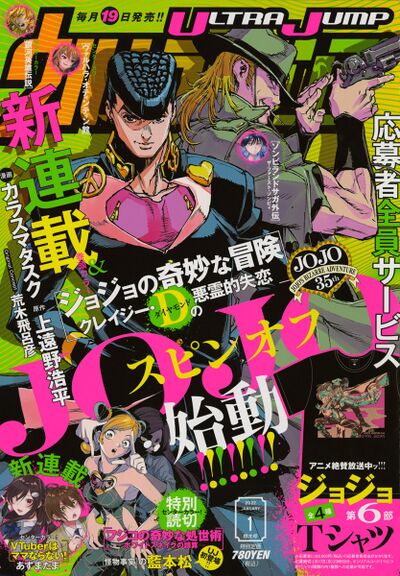 It is also the first official JoJo's Bizarre Adventure manga spin-off not to be illustrated by Hirohiko Araki.[3]

In Cairo, Egypt, March 1999, an elderly woman asks Hol Horse to find her missing parrot. The woman is the mother of an animal trainer who notably owned Pet Shop but had been killed by DIO. Because the parrot was trained alongside Pet Shop, there is the possibility that it is a Stand User and that the Speedwagon Foundation is trying to eliminate it. Hol Horse accepts the old woman's request out of kindness. Hol Horse then heads to a hideout to find an old comrade of his, Mariah, and they discuss the psychological scars DIO has left in them. Hol Horse accidentally makes Mariah angry and she uses her Bastet to attack him. Hol Horse gets stuck on some pipes and is nearly impaled by several swords. However, Hol Horse survives and he meets Boingo, with whom he teams up again to find the parrot. Using Tohth's power of prediction to divine their path, Hol Horse and Boingo see that they must go to Morioh, Japan.

In Morioh, a young girl named Ryoko pays her respect to Noriaki Kakyoin's grave. It is revealed that she is Kakyoin's cousin and that she too was approached by DIO ten years ago. On her way back to university, she finds Tohth on the ground. Reading it out of curiosity, she reads DIO's name in the page and realizes that it must have some importance. She takes and hides the book in her bag just as Hol Horse walks by her. Hol Horse has just lost Boingo's trace and he tries to ask the locals for their assistance without success. Suddenly, a car driven by a man who seems possessed surges towards Hol Horse. Hol Horse suddenly finds himself paralyzed by his old fear of DIO and is only saved by Josuke Higashikata's intervention. However, Josuke has seen Hol Horse's Stand Emperor. Considering him suspicious, Josuke challenges Hol Horse.[4]

Josuke and Hol Horse mock each other's sense of fashion when the possessed driver almost collides into Hol Horse from behind. Josuke protects Hol Horse again by punching the driver in the face and then healing the man's wounds. Josuke also heals the injuries of everyone wounded from the car accident. However, the pedestrians assume Josuke and Hol Horse caused the accident because of their appearances. While Josuke intimidates them, Hol Horse takes the opportunity to run away. Hol Horse thinks to himself about everything that happened and wonders about the Stand User that possessed the driver. Suddenly, Josuke appears behind him as he didn't want to be at the accident scene when the police shows up. Josuke stops Hol Horse from running away with his Stand, forcing Hol Horse to introduce himself. From afar, a parrot watches them with its Stand.

Meanwhile, Ryoko thinks about the book she picked up and wonders whether it will have any clues about Noriaki's death when new pages suddenly appear. An elderly lady kindly asks a thug to move his car since he's parked in the middle of the road, but he tosses his phone at her in response. Ryoko intervenes and says the thug should park somewhere else. At first the thug assumes Ryoko is one of Fungami's girlfriends, but then insults Ryoko’s dangling hair claiming Fungami wouldn't date someone like that. Josuke, who was behind Ryoko, assumes the thug was insulting his hairstyle instead. Josuke rapidly punches away the thug’s car with Crazy Diamond and reshapes the car's roof into a cage. Ryoko is surprised to see that everything the book predicted in its new pages came true.[5]