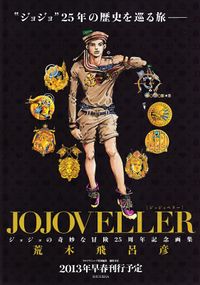 Interviews with Hirohiko Araki, as well as his editors such as Ryosuke Kabashima in the History book in the artbook JOJOVELLER, released on September 19, 2013.

“
In my talk with Gaba-san, there was a small conversation and I decided I wanted to create Dio. There were plans for the story already in place that led me to wanting to create him and I was already wondering how I could make this ‘Dio’ work. I was thinking about making a manga that showed off the contrast between the protagonist and a rival. One that resembled the contrast between ‘Good and Evil’, or ‘White and Black’. In that kind of a manga, if the rival isn’t powerful, then the story absolutely won’t be interesting. So, I wanted to make the readers think “How could the protagonist possibly beat this guy?!” To that end, I decided on making him the ‘Ultimate Evil’. However, I also wanted it to make it a type of evil that had parts the readers would admire and be attracted by, one that the readers could relate to.

Since Dio was made to be the ‘Ultimate Evil’, the contrasting Jonathan ended up becoming an extremely pure character. If I made Jonathan now, I could probably add a little bit more flavor to him but at the time I was quite young. Regarding his name, there really isn’t a deep meaning to it. I thought that since the main character is a foreigner, I should make a name that’s easy to remember for readers. Like the name ‘Steven Spielberg’, I wanted to go with a name that rhymed and left a strong impression: Jonathan Joestar. Now it’s quite accepted, but at the time there weren’t many manga that had a foreigner as the protagonist, so there was a bit of unfamiliarity or strange feeling regarding the character. Even I thought that this might not end up being popular, but I also had the feeling that I wanted this kind of thing to be appreciated and recognized.

Dio was developed in the same way as Cool Shock BT’s protagonist, B.T. More deeply than BT, he’s a character that represents the dark side of humans’ jealously and hungry spirit. At the time I was drawing Dio, I might have also been influenced by my own mind. There wasn’t anything that particularly made me angry, but, for example, during regular life I would suddenly begin to think dark things. I saw things from the same point of view as Dio, and began to do things like view humans as if they were insects. That kind of a thing was happening in my mind around that time.
”
—Hirohiko Araki
“

Q: You chose the name "Jonathan Joestar" because your meetings were held at the family restaurant "Jonathan's", right?

Kabashima: Didn't you want to make the name "JoJo"?

Araki: I wanted to have an alliterative name like Steven Spielberg, so the acronym would look like J.J. or S.S. But the family restaurant we had our first meeting at was Denny's. It wasn't until later that we started going to Jonathan's.

Q: No no, you've mentioned it was Jonathan's elsewhere (laughs). You stated, "Because it was at Jonathan's."

Araki: Ohh, that was more of a "Sure, Let's go with that" type of answer. (laughs)

Araki: Legends are a requirement for the horror genre.

Araki: It was just to make the J.J. alliteration. I didn't really take it from anywhere in particular.

Kabashima: It seems the origin of Jonathan has also become something like an urban legend, but it was definitely a Denny's at first, and then we switched to having meetings at Jonathan's somewhere during the middle of serialization. It was convenient because it was close to Araki-san's workplace at the time.

Sekiya: Another point is that Araki-sensei said, "I want a woman to be the main protagonist."

Q: This is for Part 5, right? You don't mean Jolyne from Part 6, but Giorno as a woman?

Sekiya: Around the time he brought it up, Giorno’s name hadn’t been decided yet. It’s not an issue these days, but back then my impression was that a female lead in a shonen manga would have been very tough to sell. During that era of Weekly Shonen Jump, it simply wasn’t the time. Thus, during my meeting with sensei, we spoke about this and that, and in the end, the protagonist ended up not being a woman. However, Giorno’s stand has the ability to create life, right? Women give birth to life, so I think this concept was probably left over from the idea of having a female protagonist.

Q: Giorno is an elegant and somewhat androgynous character. Is the initial idea of having him be a woman related to that?

Sekiya: Giorno’s real name, Haruno Shiobana, is also very feminine, right? Sensei may have been thinking of having the story unfold with Giorno being revealed to be a woman. Now that I think about it, he used to joke around with ideas, saying things like: "What about if it was a woman who looked like a man? Wonder if that would work?" (laughs)

Q: Part 6 had the first female protagonist. Was this Araki-sensei’s idea?

Azuma: That’s right. As a shonen magazine editor, I politely asked him to make the protagonist a boy, but he refused in 3 seconds (laughs). The readers of Weekly Shonen Jump wouldn't accept a female lead, which is why I wanted him to change it, but he just replied, "That's exactly why we're doing it".

Looking back at the series' popularity at the time, I still believe that a male protagonist would have been better. However, considering the long history of the "JoJo" series, I also think that it was overwhelmingly beneficial that the Part 6 lead was female. I get the impression that Araki-sensei is the type of person who won’t repeat the same thing twice. He is the type of artist who constantly takes on new challenges, so maybe he instinctively knew he'd lose the motivation to draw if he chose a male protagonist just for notoriety’s sake.

It was around then that strong female leads had also begun appearing in films, so perhaps he thought the time was right. If he really cared about gaining popularity, he could have just made the protagonist something like a "miniature" version of Jotaro from Part 3. He wouldn't do that though, he's the type of artist who has to continue fighting.

Q: From an editor’s point of view, what type of artist did Araki-sensei seem like at the time?

Azuma: He could construct both the characters and the story firmly in his head and always met deadlines, making him very easy to work with and highly valued by the editorial department. I suppose I was chosen to be Araki-sensei's editor because the higher-ups thought that our hobbies were similar, rather than my suitability as a manga editor. Much like Araki-sensei, I also love music and films, and I know pretty much all of the music that he listens to. I think the editorial department considered it important that Araki-sensei was able to work comfortably. I had the privilege of working for him for two-and-a-half years, but at that point only about 5 of my ideas were used (lol).
”
“