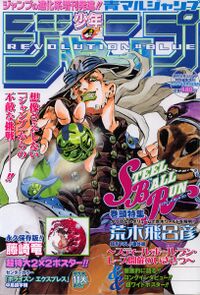 A long interview with Hirohiko Araki discussing Steel Ball Run from the special edition of Aomaru Jump released on February 26, 2004.[1]

- Your new serialization "SBR (Steel Ball Run)" is highly anticipated, but this isn't JoJo's Bizarre Adventure Part 7, is it?

Araki: Although I would think that people who read JoJo Part 6 would understand, the world reset and entered the next new world, and that's where the setting is now. But the theme of JoJo isn't about writing parallel worlds. It's just the starting point of the tale, and unrelated to the story.

- So that's why you removed JoJo from the title?

Araki: That's correct. However, people who were fans from the beginning are free to consider SBR as JoJo Part 7, and so SBR is a new work existing on the extension of JoJo.

- Is the story of SBR something you had thought up a while ago?

Araki: That's right. I already have a general outline of each story theme planned up to part 9.

- Huh? Are we allowed to leave this in?

Araki: Even though I say Part 9, it doesn't mean it'll be a continuation of SBR. This isn't a saga like Star Wars. The theme and narrative structure will be completely different.