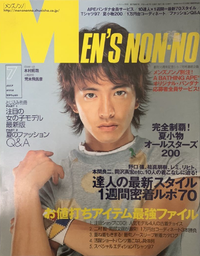 An interview with Hirohiko Araki found in the July 2002 issue of MEN'S NON-NO.

People are often surprised by this, but I used to play little-league baseball. Although, there was one absurd aspect of the team I didn’t like. I used to think, “Why does that kid keep getting put in when I’m the better player?” Maybe I was being selfish, but it meant that I didn’t have a space where I was able to be myself. Despite that, I still kept playing, but I still don’t even know why I suppressed those feelings to do so. Starting in middle school, I began doing Kendo. I decided, “I’ll never take part in another team sport like baseball ever again” (haha). Around that time, I noticed that my personality wasn’t really meant for groups. I read books by myself, looked at art, drew, and I noticed that doing these things alone made me feel pleasant. Being immersed in that world by myself was fun.

Now that I think about it, the fact that I liked being alone was probably in part because of my family. I have two little twin sisters that are 4 years younger than me, but their presence is considerably large. This is when we were children, but if I were to give you an example, there was one time that my mother was preparing for us three pieces of cake as an afternoon snack. Since my sisters usually get back home faster than I, they usually eat first. So, they must’ve been thinking, “(If we eat big brother’s piece) He won’t know, right?” My sisters conspired to eat my piece of cake. Well, if they would’ve just asked I wouldn’t have minded (haha). I wonder how many times they tried to trick me like this. We fought, but they would both start crying at the same time, and, even though I wasn’t a bad kid, it made me feel bad. I always felt like I was getting blamed for something I didn’t do, so I ended up not liking coming back home. I saw this strong bond between my sisters, and it made me a feel a strange sort of alienation. Mentally I was an only child (haha). That’s why I think I ended up liking doing things by myself. Nowadays our relationship is normal, my sisters and I (haha).

Manga and stories you were passionate about

Those days I was really into Star of the Giants and other manga by Ikki Kajiwara. They taught me more about life, I think. A little bit later I got into things like Ashita no Joe. Of course, I loved Tezuka-Sensei’s manga too, but the manga I ran to buy every week was Kajiwara-Sensei’s. Now that I’m thinking about it, I think Kajiwara’s manga had an influence on me wanting to start Kendo in middle school. Besides manga, I read a lot of Edogawa Ranpo’s book series and the Sherlock Holmes series. I wonder if I was already starting to draw stuff like manga around that time. I might’ve been trying to reproduce the coolest and most popular characters from those series, but I don’t remember. From the beginning, this was the world I drew from.

During one’s high school days*, your path in life and your future start to gradually feel more real. Due to my personality, I thought that the lifestyle of working in someplace would be impossible. Around that time, I started thinking about the power of manga. It had the power to make readers keep flipping pages, the power to make the reader anxious for new developments in the story, the power to make readers run and buy the newest chapter on the very day it’s released… I think the power of manga is incredible. From that point on, I had a strong feeling that I wanted to become a mangaka. In terms of manga I was reading at that time, I really got into Yokoyama Mitsuteru-Sensei’s suspense manga. It was a lot different than Kajiwara-Sensei’s fiery “I’m gonna rise in this world!” type of manga. This was more focused on character motives and strategy, with the criminals being more dry and business-like. At the same time, kids wearing school uniforms were hanging around ancient ruins, it was both a comforting and discomforting feeling. “So, manga like this exist too” I used to think; it felt fresh. Besides that, the Lord of the Flies short story left an impression on me. It made me think. It had a similar theme to Jules Verne’s Two Years’ Vacation, where a group of young boys wash up on a deserted island. However, in Lord of the Flies, there’s a factional dispute among the boys, all the way until the end where they end up wanting to kill each other. I really think Lord of the Flies was the more realistic of the two books. Those days were when my first contribution to Jump was selected for an honorable mention. My name was printed in the small corner of one of the pages. That made me extremely happy. Even to this day, it might be the happiest moment of my life.

I submitted my work several times, but I was criticized for a lack of artistic ability. I thought, "Well, I'm going to need to get better at drawing," so I enrolled in a vocational design school in my hometown of Sendai after graduating high school. I had a friend at the time who excessively praised my work. Thinking about it now, it wasn't really a great manga, but he would constantly say, "Oooh, I like this, this is so cool... let me read some more." Look at that, being encouraged by people makes you feel good and it helps you get motivated, doesn't it? (haha). Those words really did encourage me and helped me out. As I continued to submit my work, I had the idea of bringing it directly to the editing department in Tokyo. The editors who looked over my work gave me several hints. Things like "this part is no good" or "put this scene here." They also pointed out all the inconsistencies and problems with my drawings. Even at that time, I had a tendency to draw the characters very differently at the end compared to the beginning (haha). But the works where I implemented those fixes ended up being better than the ones where I didn't. Even I was able to feel that. This work, which I fixed up based on the advice I received, ended up being my first work to win an award.