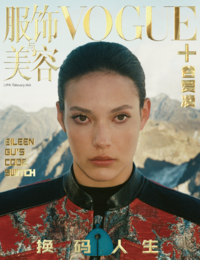 An interview with Hirohiko Araki from the February 2022 issue of VOGUE+ magazine published on February, 9 2022. It is notable for being the first interview that Araki has ever been done with the Chinese press.

VOGUE+ is a monthly Chinese apparel, beauty and fashion magazine that started publication in September 2005.

It’s been 20 years since you created Stone Ocean, a masterpiece of a manga featuring a female protagonist. What was the reason that you made the main character a woman?

Araki: JoJo’s Bizarre Adventure is a manga series based around the theme of the protagonists inheriting the spirits of their ancestors. My goal was to make the main character of Stone Ocean, Jolyne Cujoh, a woman who would still be able to hold her own in a fight, both physically and mentally.

How does the way you portray Jolyne Cujoh physically differ from those of your other male protagonists?

Araki: Even when depicting male characters, I often reference poses and styles used by women. And while drawing female characters, I try to make them more expressive and dynamic than they would be normally. In Jolyne’s case, I was very conscious of how muscular the character would be.

The way the series focuses on spiritual power and the manifestation of “Stands” is very unique. What were you thinking when you came up with this concept?

Araki: Stands were created to reflect an “inner power” that’s invisible to the naked-eye. That’s why when I design Stands in my manga, I aim to match the ability and appearance to the personality of the user they’re tied to.

So what was the design process for Jolyne’s Stand “Stone Free“?

Araki: Jolyne’s Stand “Stone Free” has the ability to turn itself into string and manipulate it. The more string it uses up, the weaker the main body becomes. This gives the Stand a “risk and reward” element that I think goes together very well.

I’ve noticed that over time the characters in JoJo have become much slimmer, sexier, and softer from how you initially drew them. What was the reason for this change?

Araki: I think it’s because of how the times have changed. In the ’80s, main characters were drawn as the embodiment of adventure, with muscular bodies and strong features. However, when I came up with the concept of “inner power” in the ’90s, the bodies of the main characters started becoming more normal-sized (around 5’7″ to 5’9″).

How does fashion tie into your manga?

Araki: Fashion plays a very important role in the creation of my manga because it helps highlight the appearance and personality of my characters.

The characters in JoJo are very elegant and beautiful. Which character design is your favorite?

Araki: It would have to be Weather Report’s fur hat.

I heard you’re personally involved in selecting the ending songs for the JoJo anime, so why did you choose “Distant Dreamer” by Duffy as the ending song for Stone Ocean?

Araki: When I listen to it, I vividly picture Stone Ocean's protagonist, Jolyne, within the coastal prison. Duffy’s “Distant Dreamer” is a great song and I love it very much.

VOGUE Magazine has appeared many times in JoJo. Can you tell us the influence that VOGUE has had on your art?

Araki: VOGUE is a fashion magazine chock-full of avant-garde and artistic photos. Every time I read it, I get inspired to draw.