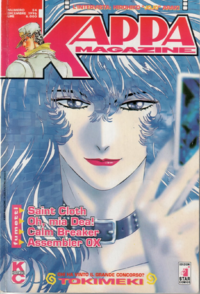 An interview with Hirohiko Araki taken from Issue 54 of Kappa Magazine, published December 1996.

A Stand For A Friend - Interview with Hirohiko Araki

Kappa: Before we start the interview--can you tell us a bit about yourself?

Araki: My name is Hirohiko Araki, I was born June 7, 1960 in Sendai, Miyagi Prefecture.

Kappa: Very good. Let's start with JoJo, then. I think it's safe to say that this series is the only "generational saga" to come from Japan. Was that your plan from the start?

Araki: Only partially. Let me explain: I originally only planned for the series to be three parts, ending with the final confrontation against Dio Brando. This means that I was already aware of the fact that I would need to make three different JoJo's, who would–in some sort of way–all be descendants of each other, and that their lives would be linked by a common curse. Anyway, I have to say that editors at the time weren't keen on the idea of switching protagonists, especially for a popular series. If readers took the news badly, it could've ended in a total disaster. But I kept on insisting that we do it this way, mostly because I didn't want to get bogged down drawing the same character for years, and because I wanted progress the story through specific historical periods without resorting to gimmicks like time travel. Fortunately, I was right, and JoJo's Bizarre Adventure has been continuing its success since 1987... Next year, we'll be celebrating our 10th anniversary!
”
[Translated by Morganstedmanms (JoJo's Bizarre Encyclopedia)]
“