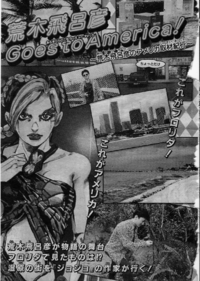 A report detailing Hirohiko Araki's adventure in America from the January 18, 2000 issue of the e-Jump magazine.

A vast swampy area! Can you imagine the end of the story (Stone Ocean)?

A 30-minute drive from Miami, a metropolis with a population of 3 million, and you're in a swampy area 35,000 square kilometers in size!

The beginning of Araki's new story takes place in Florida, a year-round warm peninsula with a large Latino population that is not only the most cheerful place in the country, but also one of the most beautiful. Not only is it one of the most cheerful places in the U.S., but it is also one of the most transformed areas in the U.S., having been cultivated from scratch by humans from what was once a swampy area. Miami, now a metropolis with a population of more than 3 million, was once a desolate place where only river grasses grew in the midst of water, alligators, many birds, and many more small animals lived. And even now, within a half hour drive from the coastal cities of Miami and Palm Beach, there are still wetlands as far as the eye can see, an overwhelming kingdom of wildness! It's a place where it's impossible for humans to casually set foot. The only place where ordinary people without any special training or equipment can go is Everglades National Park, which stretches over 6,570 square kilometers in the southwest part of the peninsula. Here, even in the swampy areas, paths are maintained and observation points are set up in various places so that people can experience a part of Florida's nature. However, an alligator walks in front of us like a loose cat. Or there is an alligator around the corner. That's what this place is. Some of them even attack humans, so you can't be too careful. What I have shown you this time is only a small part of Florida. Araki-sensei is enthusiastically taking pictures and doing research, but first of all, what will happen to this story that started in a "detention center"? Can you read it from these photos?

Is it good in America?

The hot dogs I ate in the real place were awesome! I was actually worried about the daily diet for Mr. Araki, who loves Italy, but he was so happy to eat hot dogs every day!