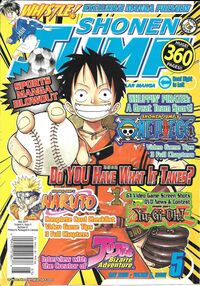 An interview with Hirohiko Araki from the 41st issue of the US manga magazine, Shonen Jump, which released May 2006.[1] The interview was later published in the fifth and sixth volume of the paperback edition of Stardust Crusaders by Viz Media.

SJ: How did you start drawing? What were your early influences that made you want to become a manga artist?

HA: I grew up in the 1970s and during that time there were many manga artists with various artistic styles. It was the renaissance of manga and I was completely engrossed by it.

SJ: How did you become a full-time professional manga artist?

HA: When I was in high school, around when I was 16, I entered a manga contest and made it to the final round. My work was praised so I decided to become a manga artist. I made my debut when I was 20 years old with Poker Under Arms, a 31-page short. It was awarded the Tezuka Award.

SJ: Between Baoh (your first manga) and JoJo, your artwork makes a dramatic change. Why did you change your style? What kind of training or practice did you undergo?

HA: Muscular actors such as Sylvester Stallone and Arnold Schwarzenegger were extremely popular back then and that is where I got my influences. At the time, I was creating a story with a theme focused on the "physical body," so my drawing style changed to a more muscular look.

SJ: What inspired you to create JoJo?

HA: I was thinking about creating a manga with the theme of attaining the ultimate body. In the end, the theme evolved into the celebration of life, family and bloodline: from parent to child, and then on to the children's children.

SJ: The JoJo series has strong horror elements. In some ways, seems like a horror manga inhabited by shonen manga heroes. How did you develop this style? Did you ever consider drawing a straight-forward horror manga instead of a shonen manga?

HA: No. I prefer creating manga that is suspenseful rather than horror.

SJ: The JoJo series takes huge plot twists when it switches from Jonathan to Joseph, and Joseph to Jotaro. When you began the series, how far in advance did you have it plotted? Did you know you would jump 100 years in the future and introduce "Stands"?

HA: Yes, I plotted ahead when I first started the series. The main characters would fight a common enemy, a formidable enemy, as if inheriting their ancestors' unfinished business from the past.

SJ: The voyage from Japan to Egypt in this JoJo series is full of details and local color. Is it based on a journey which you made yourself?

HA: Yes, I always travel to the locale and recreate the locations based on the trip.

SJ: Your characters have incredible clothes, hair and fashion. Their clothes are so unique, they are almost similar to superhero costumes (although much better-looking). How do you come up with ideas for their appearances?

HA: I make sure the clothing enables you to recognize a character even when they are drawn small. I use sculptures from the Roman Era or fashion models as reference when drawing them in standing poses.

SJ: JoJo seems to have an American and European influence, not only in the settings and characters but also in the artwork. Why did you choose to tell a story with British, American and Italian main characters? Do you consider yourself influenced by non-Japanese comics?

HA: I was influenced by the Italian lifestyle, their way of thinking, fashion and their design sensibility. I love all historical painters and artists so I consider museums a sacred place.

SJ: What is your advice to readers who want to become comic artists?