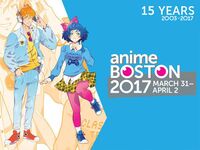 Interviews with Naokatsu Tsuda, the creative director in charge of David Production's anime adaptation of JoJo's Bizarre Adventure, on April 1, 2017.

Naokatsu Tsuda, the creative director in charge of David Production's anime adaptation of JoJo's Bizarre Adventure, was a guest at the Anime Boston 2017 convention. The following is paraphrased from questions that he answered.[1]

Araki had approached them when they started Part 4 to ask them to add in the foreshadowing scenes with Kira. When he was writing the part, he didn’t know who the main villain would be, and if he had known, this is how he would have wanted it to have been.

Tsuda said the color schemes for the characters were based off the Medicos palettes because those are Araki approved. They wanted to add in those color changes because 1) no other anime does that and 2) he felt like everyone reading it had different visions of the colors and wanted to include that feeling in.

His favorite openings were the first one and Great Days, and he talked about how usually directors don’t get a say in the openings but he got to choose the style of music and the feel for the openings. He also mentioned he couldn’t legally say which songs he wished he could have used for the endings but he had a lot.

Usually, anime come out before games, so the voice actors from the anime carry over to the game. However, since All Star Battle was out before the anime, what they did was they allowed those voice actors to re-audition for their roles. Since game voices are recorded alone, and anime is recorded together in a group, they cast voice actors based on how well the teams meshed together, which was why some were chosen differently for the anime. They wanted to have a team that sounded good all together.

The first opening included all the JoJos because Tsuda wanted to promise the fans that he would animate them all. He really wants to do all the parts, and said it really helps to show the companies like Warner that the audience has an interest in them by doing things like writing in. He asks everyone to please send comments in to let them know more JoJo is wanted.

When asked which part he would be most excited to animate, Tsuda replied saying Part 8. He then facetiously asked how they knew Part 8 since it wasn’t officially translated.

There is another interview with Tsuda by AnimeHerald at Anime Boston.[2]

It would be difficult to overstate how profound of an effect “Jojo’s Bizarre Adventure” has had on Naokatsu Tsuda’s career. He had been a fan of the manga from Shonen Jump, which led directly to him getting the job directing the anime adaptation. David Production COO Koji Kajita asked Tsuda directly if he liked Jojo, and Tsuda responded “Yes.” Kajita wanted fans on the production team.

After being given the directing job, Tsuda needed to decide how the anime was going to look. Tsuda explained that the publisher provided feedback that they wanted to anime to stick very close to the manga. I’m not sure they anticipated just how close Tsuda was prepared to go.

Of course, the publisher may have had a good reason for wanting the anime to hem quite close to the manga:

He noted that his job is getting harder every year. The trick is making each season unique, and Tsuda himself noted that “the idea drawer is getting depleted.”

The discussion then moved into the difference between original works and adaptations. Tsuda commented on the subject, stating:

“Both are challenging, but original adaptations are much more difficult and rewarding.” -Naokatsu Tsuda

He explained his reasoning. With an original work, you need to generate a screenplay from scratch. Furthermore, with so little set in stone, directing is much harder.

I was curious if the growth of the American audience, via Crunchyroll, Amazon, and Netflix has affected his job. He responded:

“No change for me yet. We will start thinking about the future audiences for our next productions.” -Naokatsu Tsuda

He elaborated that he’s currently working on several different productions, some of original works, others of existing properties, but he wasn’t at liberty to give specifics.

He dropped a bombshell when I asked about how the industry has changed during his career. He noted that digitization had been the biggest change, but then followed:

“I feel we can do away with paper as soon as possible.” -Naokatsu Tsuda

He explained that the issue is geography. When working digitally, you can have many people working on the project from any location. I’ll come back to this in a second. I followed up, asking what he felt the greater limitation in production was: Money or time. He laughed and replied:

He followed up, stating that it really depends on the position and the production. Sound directors and editors were very important areas to have quality staff. Character designers, in particular, had to fit the production. I guess that makes a lot of sense, given how much everything flows from the lead character’s design. Nailing Jojo and Dio helped propel the show into the stratosphere.

I was curious about the process for selecting what shows both he and his studio would work on. Tsuda explained that the label would send their producer out to pitch a show to Tsuda’s studio. Tsuda became a bit introspective here, and wondered if their studio might be at the point where they could do an entire production in-house. (I want to confirm that is what he meant as the translator may have struggled a bit here)

I asked him if he felt it was harder to move up in the industry today. He felt this was not the case:

“It is much easier today, with so many titles in production. Too many.” -Naokatsu Tsuda

I swear to Jojo that he said the next line exactly as you’re reading it:

We moved on to the nuts and bolts of the job. He explained that he is almost never completely happy with his work. However, he has a responsibility to keep up with the schedule, so that keeps him moving forward. The most important thing are the storyboards. With those, he simply cannot move on until they get a passing mark. After that, he’ll strive to perfect them as time allows.

I was curious if he was worried about being typecast. He replied:

“I’m happy to be known as that ‘JoJo guy’, but it is not something I can rest on.” -Naokatsu Tsuda

He went on to share that he felt compelled to go work on original titles. He was concerned about stuck in one place, mentally.

“I was happy to work on Planetarian. I explored new things, grew, and took that growth back to JoJo.” -Naokatsu Tsuda

I asked him what recent works had impressed him. He replied that KonoSuba: God’s Blessing on this Wonderful World! was pretty much flawless, with nothing to complain about. Sword Art Online and Attack on Titan also impressed him, as did Erased.

He noted that he was impressed both with the Erased manga, as well as the anime. He knew they were going to have different endings, but the fact that they were both executed so well, and in such a short turnaround, that was something special. He followed with one more title:

“I liked Your Lie in April. It was good.”

I finished up by asking what he was reading these days. He said he was reading “Wave, Listen to Me”. Kind of a lucky break that it is something that is available in America, as that didn’t have to be the case.

After having some time to think about and digest everything Tsuda said, I’m wondering if the current production system is sustainable. Tsuda was clearly concerned about acquiring the proper talent for each production, and I wonder if that is going to become more difficult in the future. His push to go digital so that they can work with the best staff available, from anywhere in the world, is apt. He’s also concerned about burnout, with so many productions ongoing.

Special thanks to the Anime Boston staff, including translator Takayuki Karahasi. Thanks to Naokatsu Tsuda as well.