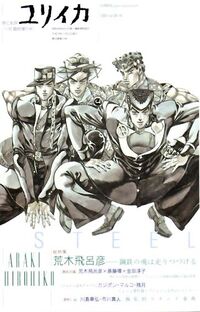 Kaneda: A while ago, there was a story called "Let's Go Hunting" and I really liked how Josuke and Jotaro teamed up. First you have Josuke who always feels like he's about to burst into a rage but he's always reliable when push comes to shove. Then there's Jotaro who can get really mad and he'll barely lose the cool expression on his face. I thought them working together went well, I love that story. It's to be expected seeing as he's a scientist, but I'm really enthralled with how Jotaro knows so much about wild animals (laugh).

Araki: Yeah, I like partnerships. When I see artists that have partnerships, I get all jealous. Though I guess there's sort of a partnership between a mangaka and an editor. I liked the partnership of Josuke and Jotaro, too. They both have a kind of "pursuer" feel to them, don't they?

Kaneda: It was so cool when Jotaro said "You've got to be the one to shoot." and then went off to let himself become a decoy.

Araki: They have a relationship where they sort of bring out each other's strengths.

Kaneda: I think that because Josuke respects Jotaro so much, he feels a lot of pride from just being with him. It's an exceedingly good relationship, even one that almost crosses a certain line (laugh).

Editor: Sounds like she's reading into it in a yaoi sort of way. I guess she's excited by that sort of thing.

Araki: Oh, I see (laugh). Maybe it's better that I didn't write that, then.

Kaneda: Yeah! If you'd written that openly, there'd be no room for imagination and that'd ruin all the fun. I don't think anything like that would happen for the whole hunting thing, but if it turned into something like "After the hunt is over, do you wanna go to a hotel?", I feel like that'd be really overdoing it! (Laugh) Also, if something like that were written in the story, there would be a lot of people that really like coupling and would say things like "the only one for Jotaro is Kakyoin!" So it would actually, it would actually narrow the scope of the story. So I really think that stopping just short of that is much better.

Kaneda: It's good to draw all sorts of jumbled lines like that (laugh). That way it never goes to the point of actual acts, it's more desirable to be potential.

Kaneda: Really, from a boy's point of view a team play is "admirable friendship". and from a girl's point of view it's has a different kind of admiration. And we want it to end with that double meaning. Personally, I think Okuyasu and Josuke make a good partnership, too. Both are good-for-nothing-types. Truthfully, if Okuyasu were smart, he would have a top-class Stand. I think that the user not being smart strikes a good balance.

Kaneda: I think Okuyasu is the best person you'd want for your friend. But in regards to partnerships, I think Johnny and Gyro in the current Part, "SBR" are the best.

Araki: That was me tracing the story of Part 1 with Zeppeli making Jonathan grow and trying to write it a bit more deeply. This time they're a bit closer in age, and I'm really enjoying writing their conversations.

Kaneda: I just love those pointless exchanges between the two. Like when Johnny used his evolved nail bullets to brush his teeth and Gyro gave that monotone response about being jealous (laugh). I remember thinking "This is how boys communicate!" when I read that.

Araki: Yeah, boys tend to have those sorts of pointless back-and-forth conversations a lot, don't they? (Laugh)

Kaneda: You really feel their friendship in those sorts of scenes. Rather than hug each other or anything, that makes them really charming to girls.

Saitou: But they have a fixed relationship, so they're kinda hard to couple, right?

Araki: Yeah, there really isn't much room there for reading too much into it, is there? I wanted to have a deeper connection of friendship between teacher and disciple than I did in Part 1.

Kaneda: It's written so richly, so they don't even need to be coupled, I guess. People have ideas about how Johnny is paralyzed in the lower half of his body, so while Gyro generally seems very cold, there are times at night when he has to care for Johnny and that sort of thing.

Araki: Yeah, I like that (laugh). Well, maybe I'll draw a scene of them in a night-time camp scene.

Kaneda: That sounds good! I hope you do (laugh)! Also, I'm hoping that Dio gets involved in their relationship somehow...... Fundamentally, Dio is a character who started out in poverty. So then, because of his desire to be successful in life, he's not afraid of anyone and he's not afraid to dirty himself to make his way to the top. Girls love that sort of thing. Fujoshi-wise, I mean in my mind, at the point in Part 6 where the character of Father Pucci that feels seriously about Dio, I've made this theory of "Dio = Princess" (laugh). Like he started out from the status of prostitute, so he dirtied his body with lots of different men, but his soul never lost its purity. And the 16 year old Pucci was attracted by that...... Early on, there's a scene where Dio and Pucci are sitting slovenly on the same bed facing different directions and having a discussion ('The Time of Heaven', "Stone Ocean" Volume 11). I simultaneously could barely believe my eyes and went mad with joy. That's the effect you must've been going for, right, Araki-sensei?

Araki: Uh... I didn't really think it would be taken that way, I don't think. Guys do that sorta thing all the time. Just sorta crashing someplace. Like when you go drinking and it gets late, so you need to stay over at somebody's place.

Kaneda: Eh, then you're saying that Father Pucci and Dio were out late drinking?! (Laugh) Um, I'm not so sure these are the types of characters who would crash at each other's place because they missed the last train for the night or something.

Araki: Now that you mention it, I think I might've had something like that in mind when I drew it (laugh). But Dio's sort of a composed character that could go either way. He could go with a man or a woman.

Kaneda: Really?! As I thought, my interpretation was correct.... (laugh). So, Dio originally liked Jonathan, right?

Kaneda: Jonathan Joestar was a man that had everything he didn't, so Dio felt that he wanted to make Jonathan his. That sort of thing. He couldn't allow Jonathan's first kiss to be with Erina, so he did it to Erina himself.

Araki: Uh, it kinda sounds comedic if you're gonna go that far (Laugh).

Kaneda: No, but Dio thought about Jonathan seriously, but at the same time homosexuality was a serious crime in England during that era, so Dio had to hide his desires for such a future deep inside.

Araki: Uh, I guess that could be.

Kaneda: And those feelings he'd suppressed so long finally resulted in him taking over Jonathan's body.

Araki: I see. Well if you look at it at that angle, it gives the story a fresh feel, I suppose. (Laugh)

Kaneda: Dio, someone so dirtied, wanted to profess "I like you" to Jonathan. But he was unable to and then Erina took Jonathan, so through bitter tears at the end he took Jonathan's body. "Now we've finally become one, Jonathan." That sorta thing. If he'd had time to smooth his words over a bit more, he would have said that he wanted to be part of Jonathan's bloodline.

Araki: That kind of sounds like the movie, "Purple Noon".

Kaneda: He wanted to become Jonathan. But I think in the end, he lost track of whether he wanted to become Jonathan or he wanted Jonathan to become his. With his noble soul that harbored such sorrow, there were men showing up that loved Dio one after another. Like in Part 3, Vanilla Ice and N'Doul and those guys. Particularly in Part 3, whenever was mentioned, they talk about his almost-transparent white skin and his bewitching charm that made it hard to believe he was a man. Even Avdol felt dizzy the first time (laugh). Even Avdol, that macho guy that liked peeing outside was attracted to Dio. So he really had an aura that attracted all types of men.

Araki: There's no way I could write that, but I'll admit that could exist as a sort of hidden meaning. He definitely had some lust somewhere.

Kaneda: Dio's confusion of not being sure himself if he wanted Jonathan's bloodline or wanted his body or wanted his heart is really juicy from a yaoi aspect.

Araki: But someone like Dio would never offer his love 100% to someone.

Kaneda: Speaking of which, he had lots of illegitimate children, didn't he? I feel bad for Ungaro being the only ugly one. (Laugh)

Kaneda: So it's a bit different from the sort of love Jonathan and such have, huh?

Araki: Jonathan and the others' love is far deeper than Dio's. They didn't run purely on desire like Dio. Dio will do anything to get what he wants, but he would absolutely never pour 100% of his love into a specific person.

Kaneda: True. It doesn't sound so much like love as it does like stealing. Well, I suppose Father Pucci, pursuing the princess he would never obtain, was really the juiciest character of Part 6.

Araki: Now that you mention it, I think I really did consciously write it that way (Laugh).

Kaneda: He wanted so thoroughly to love Dio more, so when Pucci said the line "I love you as I love God", it was a real thrill. And in response to that, I'm glad Dio said "I was afraid you'd disappear". Vanilla Ice loved Dio as well, but he died spinning around in circles like that, so you wanted to have a character express their intense feelings towards Dio in a more open way, huh?

Araki: I think if Dio had lived, it could've gone a bit more in that direction. But he's dead, so all of that will just remain in the realms of imagination.

Kaneda: But there were people like this in Dio's life, so I feel vindicated.

Kaneda: I suppose so. I think for Dio, their relationship was casual. There was a sort of feeling like "You don't know anything about my life, so don't start worshipping me like a god." I guess. "I've been the object of pleasure for hundreds of men!"

Araki: He was made the object of their pleasure? (Laugh)

“
Kaneda: Most of the enemies appear in pairs, but there are some like Squalo and Tizzano who always stick together so much they make you say, "Aren't you too close?" (laughs). They're really a couple, aren't they. Tizzano even dies for Squalo. Although they both died in the end.

Araki: But that's essentially a result of the fashion aspect, so I don't think they're fundamentally an established couple. Also, their fashion is mostly drawn referencing women's fashion, so it might be because they are a bit androgynous.

Kaneda: In part 5, everyone's wearing really sexy clothes that have holes which show their skin in various places. That must be mostly because its set in Italy, right? It feels totally natural that if it's in Italia, men can be so lovey-dovey with each other.

Other languages:
English • português do Brasil
Retrieved from "https://jojowiki.com/index.php?title=Interview:Eureka_(November_2007)&oldid=741913"
Category: