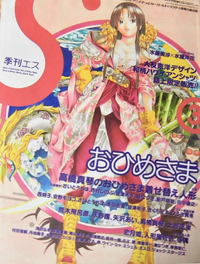 An interview with Hirohiko Araki about the JOJO in Paris exhibition featured on the s-manga website as well as a longer interview published in the Summer 2003 issue of the Quarterly S (季刊エス) Vol. 3 magazine.

A short report about the JoJo in Paris exhibition transcribed from an audio interview with Araki.

Q1: "So, why did you decide to open a solo-exhibition?"

I think that manga has various appeal, but I also think that it appeals to painters and artists as well, which is an area I wanted to explore.

Q2: "Why did you choose to open the exhibit in Paris?"

The reason I didn't want to inform any of my Japanese readers about the exhibition in France is because I want people who haven't read my manga to see my art.

Q3: "What were your thoughts on the solo-exhibition?"

Coming to Paris, I saw people of various ages and races, and it felt like I was in a painting without borders. I'd like to think it was very successful with my audience.

A longer interview published on June 15, 2003 in the Quarterly S magazine.

What made you decide to hold a solo exhibition in France? I think it’s pretty uncommon for an author to take the lead.

Araki: Most of my readers are people in their teens or early twenties. But there was one instance where a 9-year-old girl came up to me to tell me how good my art was, which made me feel happy. Even though she hadn’t read my manga before, she still had an appreciation for my art.

This experience made me wonder how older people would react if they saw my art, too. It also made me wonder how audiences overseas might view my art compared to folks in Japan. And so, I got in touch with someone and decided to hold an exhibition in France.

I’m surprised myself. But to answer your question, it all started because of a little girl.

Oh, I see. As the gallery owner, what was your first impression when you were asked to hold a solo exhibition? I’ve heard this gallery usually exhibits works from prestigious artists such as Renoir and Chagall, so this must’ve been quite a new challenge.

Vedovi: Firstly, as someone who deals in abstract art, I’ve always been fascinated by manga and anime, which are only now seeing worldwide attention.

I also admire seeing the works of other Japanese artists, such as Takashi Murakami and Yoshitomo Nara, and have wanted to exhibit something similar to them for a while. So when the offer came, I felt like I could connect immediately with the artist. I think it was fate that we were able to meet.

Also, during this time, I was a big fan of Arnaud Faugas, a famous abstract artist who paints cartoons. I believe his success is largely in part due to the way he uses different animation techniques in his illustrations. The colors he uses are also very cartoonish. I think my interest in those aspects of his art is what led to my exhibition with Araki.

Is that to say you get a particular feeling looking at Japanese manga and anime that you don’t get from Western art?

Vedovi: For a long time, French people have viewed manga and anime as something only meant for children. However, both Takashi Murakami and Yoshitomo Nara have created wonderful works of art that are now recognized in France and Europe. That’s why I consider manga illustrations to be another form of abstract art. I think this is the artistic notion of all Europeans, not just the French.

So, although JoJo is available in French, the readers who buy it are mostly people in their teens or early twenties. But they would never read it if it didn’t have any artistic quality. I think it’s because of this artistic quality that manga is accepted into the hearts of kids.

It seems that Mr. Vedovi sees your art as abstract. What do you think about this from the perspective of an artist?

Araki: In my case, I’m more influenced by the style of classical Western paintings rather than abstract art. For example, I like to study the color composition used by artists such as Velázquez and Gauguin. I then incorporate parts of that into my manga. So I don’t really have any interest in abstract art.

Manga artists have many roles, such as scriptwriting, photography, and acting, but I’d like to think of them as artists, too. Or at least, that’s what I like to focus on. That’s just the kind of manga artist I am. It’s not like I dislike abstract art or anything, it’s just not something I’m interested in. I’m more interested in the classical side of art. So you could say I’m more of a … Neo-Velázquez?

Is that so (laughs). You said that you like to look at classical paintings to study the fundamentals of their colors. Do you feel the same way about that, too, Mr Vedovi?

Vedovi: The way Araki uses colors in his works is very beautiful, so I get the feeling that he’s seen a lot of impressionist paintings. However, abstract and contemporary paintings are a genre of art that utilize a lot of dynamic movement, atmosphere, and color in their composition, and I feel like Araki also uses that well in his works. His art manages to have both dynamic movement and beautiful colors, which I think gives it a dream-like quality.

Certainly. The poses for Araki’s characters are very unique, and even the black-and-white pages of the manga have some interesting compositions. I think that’s what makes Araki unique, but do you look at those aspects in the same way?

Vedovi: I’m impressed at how extremely well done the drawings in every panel are.

In Japan, a problem people face nowadays is how to take their drawings and transform them into their own thing. In that regard, Araki-sensei is an expert. What do you hope to see from people working on Japanese manga and anime in the future?

Vedovi: Since the end of the war, Japan has been greatly influenced by the United States in terms of art, such as anime and manga. But in the future, Japanese anime will have a global impact on the world. I feel like everyone is becoming more and more aware of it throughout the world; I’m sure everyone here is aware of it, too. So from now on, I think it will become something very easy for young people to get into.

Well, that’s very interesting. It’s hard to grasp that from the standpoint of an artist working in Japan. Even if you told me that Japanese manga and anime are popular outside Japan, it doesn’t quite connect. It’s very fascinating to hear what others think about Japan, especially people from overseas.

Vedovi: We’re all trapped in the preconceived notions of the past. I think it’s important for the new generation of young people to broaden their horizons on a global scale, free from any standpoint, and do the things they want in a free society, including drawing anime and manga.

By the way, since it is Araki-sensei’s exhibition, what do you personally think is the most interesting part of Araki’s art?

Vedovi: Above all else, beauty. The pursuit of beauty is something that is gradually disappearing from society. We’re also stepping into a new era that has never existed before. He’s creating a new era that is completely different from the manga and anime that I saw as a kid. That’s what I’m interested in.

On a personal note, I have a 6-year-old boy who already uses the word manga. This means that a Japanese word has already entered the French vocabulary, that’s how widespread anime and manga have become. To begin with, my son is already a big fan of Araki-sensei’s JoJo.

Is that so? So JoJo has readers all around the world.

Vedovi: That’s right. And there are a lot of them, too.

Then it would be good to have exhibitions in other countries, too, not just France.

Vedovi: My parents own a world-renowned gallery in Brussels, Belgium. So maybe next time I’ll be able to show Araki’s works in Belgium instead. I’d like to do that.

I see you’ve already made plans for the next time (laughs).

Araki: If Mr. Vedovi wants me to do another exhibit, I’ll do it. Even if it means going to the other ends of the earth (laughs). I’d be very happy.

Well, I’m looking forward to your next exhibit (laughs). By the way, do you have any ambitions for how you would like to draw in the future?

Araki: I always draw my art with themes, like courage. I want to be able to give encouragement to my readers, I don’t want it to go in a negative direction. That’s the only thing I try to keep in mind.

Both a 9-year-old girl and a 6-year-old boy are fans of your work (laughs). Thank you very much for your time today.