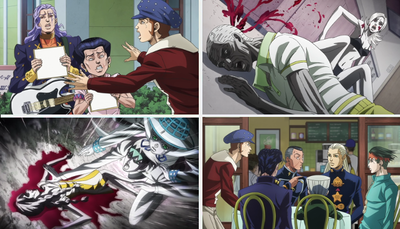 One day, Rohan Kishibe meets with his then editor, Minoru Kaigamori, to ask for an advance payment on his next one-shot. Indeed, Rohan informs Minoru that the mountain range he's bought to look for a yokai is now worthless and that he is penniless. However, he also considers his efforts fruitful as he got to see the famed yokai with his own eyes.

The creature is linked to an incident involving a woman named Naoko Osato, who killed her boyfriend. Naoko was the heir of a wealthy family of miso sauce producers and had an arranged marriage, however, she secretly had a relationship with Gunpei, the gardener.

One day, the future husband came to the family residence, prompting Naoko, hidden in the secondary mansion with Gunpei, to confront the latter and end their relationship to embrace her responsibilities as heir. A dispute ensued and Naoko shoved Gunpei into a bag of golf clubs, killing Gunpei whose skull was pierced by one of the clubs. Just as her father and betrothed approached the residence, sure of Naoko's presence, the panicking young girl tried to wash away all the blood from Gunpei's wounds. However, despite her best efforts, Gunpei continued to bleed unnatural amounts of blood. Desperate, she hid Gunpei's body inside a carpet and had to drink his blood to hide it from her betrothed. To this day, Naoko kept Gunpei hidden in a cellar and formed a morbid relationship with him.

Rohan learned of it by meeting Naoko one day and turning her into a book, and thus headed to her mansion to look at Gunpei directly. On his way, he was pestered by a real estate agent named Batsudera. While Batsudera was distracted by a phone call, Rohan sees an unknown little girl, who fled before him. Rohan reflexively tried to grab her, but instead shoved her, making her trip into a rock. Batsudera approaching, Rohan understood that the girl was Gunpei and Naoko's child and that she tried to haunt him too. Before she died, Rohan made her unable to acknowledge his presence, and the yokai within the girl shrieked at Rohan, deprived of its triumph. The girl then reawakened, in perfect health, and went away.

Rohan finishes his account to Minoru, Koichi, Okuyasu, Mikitaka, and Josuke, who also listened to the story. As a conclusion, Rohan explains that he's decided to leave the yokai, having seen it as he wanted and being a mere mangaka. Thus, Naoko and her yokai family still live together, all happy in their own bizarre way.