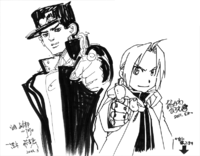 Sketch collaboration between Araki and Arakawa

Hiromu Arakawa has always read the works of Hirohiko Araki since her childhood. In 2011, Araki is approaching thirty years of his career. From the appeal of their works to the surprising common points between the hymn to humanity and the principle of equivalence, here is the interview of the century between two people on the front line in the world of shonen manga!

JoJo's Bizarre Adventure, the manga that gives you courage

Arakawa: I read your manga since Baoh the Visitor. And of course, I love reading JoJo's Bizarre Adventure since the first part. I am honored to meet you today!

Araki: Wow! I am very happy that you have been reading me for so long. Thank you so much!

Arakawa: While I was in elementary school, my older sisters used to buy Shonen Jump. In our barn, I specifically found the issue with the first chapter of JoJo's Bizarre Adventure. I went to read it in a dark barn where some agricultural equipment were stored, and I was completely captivated.

Arakawa: It was twice as scary. But I was still really into it (laughs)! I was still a kid at the time, and I imitated the Ripple and said things like "I want a Stand like this!" (laughs). Knowing that I was going to meet you, I wondered what made JoJo's Bizarre Adventure so appealing to me. And I told myself that it is the fact that it gives me courage.

Araki: That's also the appeal of Fullmetal Alchemist (referred to as Fullmetal from here on), isn't it? When I read it, it made me reflect on the origins of humanity. Through the system of alchemy, we go as far as researching the mechanisms of nature and the human world. I was thinking "Whoa!".

Arakawa: Oh, thank you very much! When I thought about the origins of mankind, it was important not to ignore the question "What are courage and pride?". The protagonists of JoJo's Bizarre Adventure, allies and enemies alike, are all proud and live a hard life. I find them admirable. Especially Iggy... Making me cry with a dog who chews gum...! The scene where Lisa Lisa puts her cigarette upside down also immediately comes to mind. I also appreciate Stroheim's determination. I really love all the characters.

Araki: Hahaha (laughs). It's because half of his body is made up of cybernetics prostheses. He wouldn't be out of place in the Fullmetal universe. Personally, I like Armstrong in Fullmetal. I appreciate the characters who let their passion run wild while keeping their seriousness. The scene where he and Sig were staring at each other and made poses was really funny. Conversely, the scene where Al is deteriorated is quite intense. His blood seal could disappear at any time... I was anxious thinking about that.

Arakawa: Yes, he should have covered it (laughs}.

Arakawa: Speaking of what makes JoJo's Bizarre Adventure so appealing, I think it's the unique dialogue. I let the JoJo's Bizarre Hyakunin Isshu (ジョジョの奇妙な百人一首, JoJo no Kimyō na Hyakunin Isshu) CD play at my work place, and I had assistants who could recite it by heart without even having read the manga.

Araki: That's amazing (laughs). I created the dialogue by thinking about their motivations, reasons, and "why are they fighting", but I haven't thought so far as making this line popular or making the readers cry. So I'm happy to hear you say that.

Arakawa: I would unconsciously say lines from JoJo's Bizarre Adventure in my everyday life. Perhaps more than you think, Araki-sensei, it's probably become ingrained in your readers' blood. That's how powerful the spirit of the words are in your work.

Araki: However, since there are horror elements in my manga, I purposely used vulgar language... I felt that I shouldn't only depict the beautiful parts. "Black and white", "Good and evil", "Beauty and ugliness". I try to keep opposites like these in mind as I draw, so I don't shy away from the ugly parts of human nature.

Araki: But you know, it wasn't until about ten years after the start of the series that I was recognized in this way. At the time, I was told that it would be difficult to set a story in a foreign country with a foreign main character. Such a manga was in danger of being questioned at any time by the magazine's editorial team. I guess I was a bit cocky at the time. I wanted to challenge the rules and jinxes of shonen manga. As long as I respected the principles of Shonen Jump, which are "Friendship", "Effort", and "Victory", why not include Western characters?

Arakawa: Besides, the story begins with Aztec people.

Araki: It's so confusing (laughs)!

Arakawa: Nooo, for an occult lover like me, I couldn't get enough of it.

Araki: At the time, I was told that a bizarre long-running drama series would not be a hit in the manga world. That's why it was a miracle that an editor appreciated my universe, encouraged me, and allowed JoJo's Bizarre Adventure to get serialized. For that reason, choosing the name "Elric" in Fullmetal would have been dangerous at the time (laughs).

Araki: Was it easily decided?

Arakawa: I think it was accepted because Enix (currently Square Enix) is a game company. In fact, we were expecting readers who are used to RPGs, so we thought a name with a fantasy flavor would be good.

Araki: Is that so? The times have changed, huh?