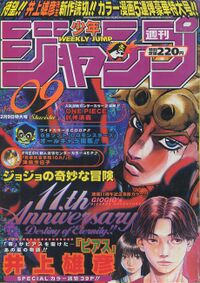 One question and one answer from Araki-sensei, "Feelin' JOJO" final episode special!!

"JoJo's Bizarre Adventures is headed in to it's 12th year! And as it's the last episode of "Feelin JOJO", we've had Araki-sensei himself appear!! He'll point blank answer some of the questions in JoJos!!

Q: Who's the strongest in the Passione?
A: Abbacchio. (If we're talking about fist fighting...)

Q2: What is that thing on Abbachio's head?
A: It's a hat that acts like a hairband. The thing on Bucciarati's head is a hairpin brooch, and Mista keeps a lot of things in his hat. Mista is the kind of guy that wants to keep both hands open at all times, so he adds things to it pretty often. It also seems that he feels like it's a pain for him to carry things around too. Side comment: The thing on Abbachio's head wasn't an eggshell after all...

Q3: Who spends the most money on their clothes?
A: Mista. His sweater is cashmere, and his pants are zebra striped leather pants! (it's suspected that it breaks the Washington Convention)

Q4: Before they met Giorno, how did Bucciarati's gang earn their livelihood?
A: They received money for protecting restaurants, controlled ports, and what you would call gang work. They didn't affiliate with gambling and drug business. Of course they didn't go to school.

Q6: When looking at Fugo's pants, it looks like there's no way he could be wearing underwear but.... Does he not have underwear on?
A: It can be assumed that he's wearing the t-back like sexy things that are popular now a days. Side comment: When you look around his waist it really does look like he's not wearing any underwear.

Q7: When they're interrogating Zucchero, what was up with Narancia, Mista and Fugo starting to dance to the music that Narancia put on?
A: They are dancing to gangster rap. As they are a gang... Side comment: Even though we know what they are dancing to, why they started dancing is still a mystery...

Q: Who is riding in Aerosmith?
A: It's Smith-san. Side comment: Check the cockpit! The person riding in here is Smith-san!!

Q8: What does Jotaro intend to do with Giorno?
A: I haven't thought of it yet. It might be that he's just simply curious about him...?

Q9: Is Trish based off of the super model Trish Goff?
A: Good job! I'm surprised that you know this. As you thought, I'm a big fan of hers.

Q10: Will Fugo die from the abilities of Purple Haze?
A: He would die.

Q12: Can the Sex Pistols only be used with the gun that Mista has?
A: Any gun that has been fired by Mista is OK! Also, Mista is able to always hit his target with one shot, and so he doesn't need machine guns and such.

Q13: Wasn't it a rule that there's only one stand per person? There's a few that have appeared since part 4 that are a number of stands such as Harvest and Sex Pistols...
A: No, these are still just one ability, and so they're counted as one stand.

Q14: "JOJO" has a lot of animals(a turtle, frogs, snakes, mice, spiders and such) that appear, but how do you pick what living creatures will appear?
A: For the most part I choose animals that "Look like they're not very intelligent and seem like they're not thinking of anything."

Q15: Do they really air "Captain Tsubasa" in Italy?
A: They do! At the very least I saw it being aired 2~3 years back in Italy!! Side comment: Tsubasa playing in the turtle! Of course this isn't in Japan, it's in Italy.

Q16: If you could pick one stand to have Araki-sensei, what would you pick?
A: Hmmm, maybe Harvest because I want money... No, I want Heaven's Door instead! I'm not very good with research interviews...

Q17: What's the meaning of the "Romance horror! The crimson secret legend!"?
A: It was something the first editor added, and there's no deep meaning to it. I actually feel like we can remove it after all this time...

The road leads on to a new adventure!!
”
[Translated by Raika][1]

Other languages:
English • português do Brasil
Retrieved from "https://jojowiki.com/index.php?title=Interview:Feelin%27_JOJO_(February_1998)&oldid=756414"
Categories: