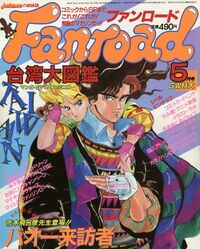 An interview with Hirohiko Araki from the May 1986 issue of Fanroad magazine.[1]

“
——Please, ask me anything

Erika: You look the same as the photo ♡. As soon as I entered the store, I knew it was you.

——But the pictures in the comics are in black and white?

Araki: Those are black and white. Super comics are in color.

Erika: How did you become a manga artist?

Araki: Around the winter of 1980, I brought a manuscript (Poker Under Arms) to Jump. It was chosen as a runner-up for the Tezuka Award.

——Oh, the entry gathered in this special edition. I'm sorry to say that I've heard the name, but haven't read it.

Araki: It's a Western story. It's pretty different...

Araki: I agree. It was like a gunman fighting with a poker game... it was 31 pages. That was my debut. After that, I started Cool Shock B.T. with 3 short stories.

——You can't really read those, now.

Araki: Oh, my old short stories. I want to sort of leave those in darkness. (laughs)

Erika: Before that, did you do entries or doujinshi?

Araki: When I was in high school, I sent in a lot of entries.

Fumaren: What kind of magazine?

Araki: Jump, of course. It was my favorite...

——What kind of stuff was in Shonen Jump at the time?

, and... I forget. (laughs) In the other magazine, there was Ai to Makoto

Erika: Are there any people who've particularly influenced you?

——He's the original author of Ai to Makoto.

Fumaren: Oh, is that so?

Araki: Huh? Maybe it's a generational thing?! It's still interesting to read!

Komiyama: Do you think of B.T.'s tricks yourself?

Araki: I write the arrangements, then think of solutions myself.

——Now, let's talk about Baoh. One of the reasons it was so popular with Fanroad readers is that, though it was short, it was a completed and fleshed out series- the ideal Jump piece...

Araki: That was the last thing I was thinking about. I couldn't have guessed that it would end up like this...

——It's nice to understand the meaning of 'the Visitor' in the end. At first, I wondered why the 'visitors' were running away...

Araki: I thought so too. (laughs)

Erika: Is there going to be a sequel?

Araki: I do want to make one.

Fumaren: I want to see a 17 year old Sumire ♡ What sort of image do you think she would have?

Araki: I agree, she'd be someone feminine but not very active.

Erika: Is Sumire modeled off of someone?

Araki: Honestly, I didn't base her off of anyone.

——Come to think of it, the Sumire from the 2nd page of the comic has changed a lot.

Araki: Her image is going to change a lot. I think of it as training.

Fumaren: Was there anyone who influenced the painting?

——Also in Baoh, the duo who threw the bomb- if you use a shuriken instead of a bomb, it's a ninja thing.

Erika: Why are Sumire-chan's eyebrows so thick?

Araki: Are they too thick? (laughs)

Fumaren: It's cute when you get used to it, but when you see it for the first time...

Erika: At first I thought they were a decoration.

Araki: I like the make up of the 60s, so I tried it out a bit. (laughs) I went to a fashion design school.

Araki: Yes, the eyes turned out well. The lips should be thicker, but I'm not drawing it anymore.

Komiyama: Why did you make Baoh a parasite?

Fumaren: I was wondering that too! It's pretty gross! (laughs)

Araki: Well, it was a little unpopular.

——But in horror movies, that's what military secrets often are.

Araki: I was thinking of a way it could happen in reality, to give someone a transformation and a different level of power. Something to make you believe that he could transform.

Erika: It reminded me of Cyborg 009

——It's a girl's interest. The lonely heroes that have their own secret power and are pursued by an organization- like 009, Wolf Guy

- all have a common tragic charm. Oh yeah, here's a question from a reader:
”
[Translated by Betsybugaboo]
“
——それでは、何でも聞いて下さい。