Minor Characters in Diamond is Unbreakable

This is a list of minor characters featured in the fourth part of JoJo's Bizarre Adventure, Diamond is Unbreakable.

As the Hirose family already has Police, Koichi isn't allowed to have another pet and has to take him for walks. He is seen sleeping at the beginning of Tamami Kobayashi's and Yukako Yamagishi's fights and is taken for a walk during Yuya's fight.

Manga Debut: Chapter 292: Toshikazu Hazamada (Surface), Part 4 (Mentioned only)
Anime Debut: DU Episode 7: Toshikazu Hazamada (Surface) (Mentioned only)
Voice Actor: Yūko Iida (Drama CD)
Junko (順子) is a girl Toshikazu had a crush on. She is in class 3-E of Budogaoka Highschool. He made Surface copy her but it also adopted her personality, acting like "a real bitch" and thinking "she's all that". Toshikazu wanted to force himself on her, but never had the courage to actually do it.
Prince 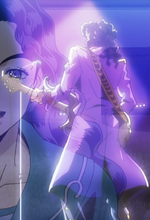 Manga Debut: Chapter 297: Yukako Yamagishi Falls in Love, Part 4 (Mentioned only)
Anime Debut: DU Episode 8: Yukako Yamagishi Falls in Love, Part 1 (Photo only)
Prince (プリンス) is a singer that Yukako mentions when she was "teaching" Koichi an English lesson, She mentions that he often sings about "Funky Music" and then wants Koichi to tell her the best definition of "Funky Music", Koichi chooses option B, "Primal Music" and is correct.
Masaji

Manga Debut: Chapter 302: Yukako Yamagishi Falls in Love, Part 9
Anime Debut: DU Episode 9: Yukako Yamagishi Falls in Love, Part 2
Voice Actor: Tarō Kiuchi (Japanese), Lucien Dodge (English)
Masaji (マサジ) is a drunk fisherman who, along with his grandfather, saw Yukako fall from Boing-Boing Cape and Koichi save her with Echoes ACT2. Assuming she was a girl who tried to commit suicide by jumping off the cliff and miraculously bounced back up, Masaji started a rumor that there was a god of the sea in the cape. The rumor spread and the fishermen started to pray for good luck to the rock Yukako was going to fall on, calling it a "sacred spot". This story turned Boing-Boing Cape into a point of interest for Morioh.
Sachiko 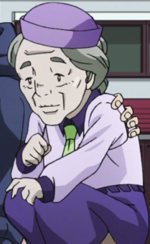 Manga Debut: Chapter 333: Rohan Kishibe's Adventure, Part 4
Anime Debut: DU Episode 1: Jotaro Kujo! Meets Josuke Higashikata
Lady Murakami (村上) is an old woman introduced in the manga as a passerby asking Rohan Kishibe and Koichi Hirose for directions to the Yamakura house because it's not shown on the map. Rohan tells her to give up because it probably doesn't exist if it's not on the map and she complains about Rohan's rudeness. In the first episode of the Diamond is Unbreakable anime adaptation, she is introduced and given a name, and is subjected to the gas of a car exhaust of a man who had been trying to seduce Tomoko Higashikata.
Ghost Alley's Residents

The Yamakura (山倉) residence sought by Lady Murakami may also be in the ghost alley since it is not on Morioh's map.

Manga Debut: Chapter 331: Rohan Kishibe's Adventure, Part 2 (Mentioned only)
Anime Debut: DU Episode 17: Rohan Kishibe's Adventure (Mentioned only)
Film Debut: Diamond is Unbreakable - Chapter 1 (Mentioned only)
The parents of Reimi Sugimoto. Reimi heard a dripping sound coming from their room and called for them but heard no response. The drip sound continued, and Reimi wondered why her parents hadn't heard it yet. She decided to go investigate the sound and found that Arnold was hanging on the coat rack, with his blood dripping. Yoshikage Kira then suddenly appeared and informed her that he had already taken care of her parents.

Reimi's parents are only named and aged in the film. Takashi, the father of the family, was 45 years old when he died. Kazuko, the mother, was 39 years old.

Manga Debut: Chapter 338: Shigechi's Harvest, Part 4
Anime Debut: DU Episode 19: Shigechi's Harvest, Part 2
Voice Actor: Isamu Yusen (Japanese), Richard Epcar (English)
Ichiro Morishita (森下 一郎, Morishita Ichirō) is a man who bought 10 lottery tickets, but threw all of them in the trash after seeing that not even one was the winning one. Harvest found one of his tickets and gave it to Okuyasu, who discovered it actually was the winning one. A bank employer called him to see if the ticket really belonged to Okuyasu, but Crazy Diamond changed his last name in the ticket to Kinoshita. When asked about the ticket, Ichiro tells the bank employer that he isn't Kinoshita, but Morishita, and asks the bank employer to sell him winning tickets next time.
Yoshioka 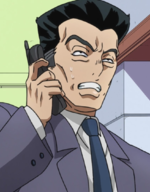 Manga Debut: Chapter 388: Highway Star, Part 5
Anime Debut: DU Episode 29: Highway Star, Part 2
Voice Actor: Tarō Kiuchi (Japanese), Stefan Martello (English)
Yoshioka (吉岡) is a businessman who is seen talking to his boss on his cellphone. He is instructed to "do as planned" when receiving an important call 1 minute later. The call would grant a business opportunity worth one billion yen. If he missed the call, Yoshioka would be fired by his boss.

Seemingly nervous, Yoshioka agrees but his phone is stolen by Josuke immediately. Unaware of what just happened, he continues talking to his hand before he notices his phone is gone, and is then anguished over the loss of one billion yen and his job. As Josuke grabbed the phone too hard, it ended up breaking. 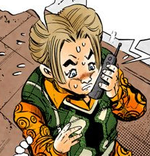 Manga Debut: Chapter 388: Highway Star, Part 5
Anime Debut: DU Episode 29: Highway Star, Part 2
Voice Actor: Mutsuki Iwanaka (Japanese), Matthew Mercer (English)
Akira is a man seen talking to his girlfriend, Minayo, on his cell phone. He is unnamed in the manga, but his girlfriend calls him Akira in the anime. Akira is nervous when trying to propose to his girlfriend, but she misunderstands and thinks he hates her. As he is about to propose, he has his phone stolen by Josuke before he could do so. He is in despair that his happy marriage will never happen now.
Minayo

Manga Debut: Chapter 388: Highway Star, Part 5
Anime Debut: DU Episode 29: Highway Star, Part 2
Minayo (美奈代) is a woman who is not seen, but is heard on the cellphone while talking to her boyfriend Akira. For unknown reasons she thinks he hated her, so Minayo insists for him to hang up the phone. Her boyfriend was actually trying to propose to her, but has his phone stolen by Josuke before he could do so. She wonders what he was going to say but Josuke hangs up and uses the phone to ask Koichi to locate Yuya Fungami.
Kimura 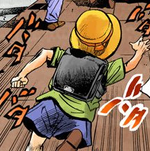 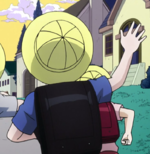 Manga Debut: Chapter 396: Cats Love Yoshikage Kira, Part 5
Anime Debut: DU Episode 30: Cats Love Yoshikage Kira
Kimura is a boy Kira sees who is late for school. One of his friends tells him to not forget his hat because it's part of the uniform. From this, Kira comes to the conclusion that Hayato has not gone to school and is instead spying on him, as the hat was still hanging by the door.
Mika

Manga Debut: Chapter 410: My Dad Is Not My Dad, Part 1 (Mentioned only)
Anime Debut: DU Episode 34: July 15th (Thursday), Part 4 (Mentioned only)
Mika was a friend Minako Okura mentioned to have gained a pair of diamond earrings as a gift from her boyfriend. Minako asks Satoru to buy her earrings as well, something that was overheard by Kira. He later forces Minako to wear her dead boyfriend's earrings before killing her, as a reminder of her wish of getting earrings like Mika.
Hiroshi Yoshimura

Manga Debut: Chapter 412: Cheap Trick, Part 1
Hiroshi Yoshimura (吉村 宏) is a man who was suspected to be Kira's new identity. He is single.
Rio

Anime Debut: DU Episode 7: Toshikazu Hazamada (Surface)
Voice Actor: Isamu Yūsen
Sakai (堺) is a friend of Toshikazu Hazamada. According to Tamami Kobayashi, the two got into an argument when Sakai insulted Hazamada's favorite idol or anime. That night, Sakai was listening to the "Help Me, Midnight Discussions!" segment on Morioh Town Radio and suddenly gouged out his left eye with a mechanical pencil due to Surface and was later taken to the hospital.
Asuka

Anime Debut: DU Episode 22: Yoshikage Kira Just Wants to Live Quietly, Part 2 (Mentioned only)
Asuka is a friend of some girls waiting in front of the St Gentleman that Koichi walks past before meeting Jotaro.
Owada

CD Drama Debut: Drama CD Vol. 1: A Ghost Story from Budogaoka High (Mentioned only)
Owada is a popular junior at Budogaoka High School. Two days before before the events of the story, he had forgotten some supplies at school, so he went back at night to get them back. While there, he heard someone playing the piano and then the phone by the main entrance started ringing however he was too scared pick up the phone. Okuyasu heard about this and told Josuke and Koichi the story of the spirit and then what occurred to Owada.

In reality, Hazamada originally just wanted to scare Owada using Surface to play up as the spirit. However, Josuke took the bait of the story to further investigate, leading the main events to occur.

CD Drama Debut: Drama CD Vol. 2: After-school Talk: At Café Deux Magots
Voice Actor: Ayaka Suwa
Rika Tachikawa is a 20 year old college student from downtown that works as a waitress at Cafe Deux Magots in S City. Her blood type is B and her zodiac sign is Virgo. Her favorite foods are miso-pickled ox tongue and nata de coco and she hates milk tea. She is secretly annoyed with her little toes that seem to be 0.5cm longer than other people. As for her personality she seems like a really nice person, acting caring and dedicated to her customers.

Okuyasu had an unrequited love with her but wasn't able to tell her due to being too afraid. She actually seems to have feelings for Rohan, as she starts smiling and singing when he's close.

Film Debut: Diamond is Unbreakable - Chapter 1
Yamashita is a man who was murdered by Anjuro Katagiri in his own home with his wife tied up beside him. Anjuro murdered him by stabbing him in the neck with a fork and flees the apartment when Ryohei Higashikata and the police break into the room.
Masaya Yoshizawa 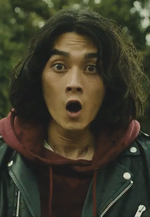 Film Debut: Diamond is Unbreakable - Chapter 1
Live Action Actor: Shuntaro Yanagi
Masaya Yoshizawa (吉沢正哉, Yoshizawa Masaya) is a young adult who harasses two girls walking by him along with his friend Hirata, trying to get the girls to come over to his place. After they walk away, he litters by throwing away his can on the ground as it missed the garbage can. Ryohei shows up to lecture him, leading Masaya to pick up his trash and discard it normally. Ryohei mentions how he heard Masaya quit his job and tells the boy to call him if he ever needs anything, as it's his duty to show people the right path. Masaya reassures Ryohei that he won't make trouble for him again.

Later, he and Hirata are by a fountain when Aqua Necklace attacks Hirata by entering his mouth and rupturing his internal organs. Aqua Necklace then enters Masaya's body and takes control of him, causing him to become a robber of a convenience store. He takes a woman hostage but Josuke punches a hole through the both of them with Crazy Diamond. The two are both immediately healed, but Crazy Diamond also infused Masaya's knife into his stomach. Aqua Necklace exits his body as Anjuro has no use for him anymore. 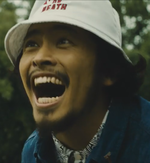 Film Debut: Diamond is Unbreakable - Chapter 1
Live Action Actor: Kinari Hirano
Hirata (平田, Hirata) is a friend of Masaya Yoshizawa who was talking with him when they try to get girls to come over to their place.

Later, he and Masaya are by a fountain when Aqua Necklace attacks Hirata by entering his mouth and rupturing his internal organs, killing him.