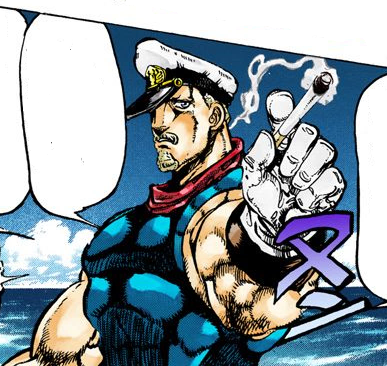 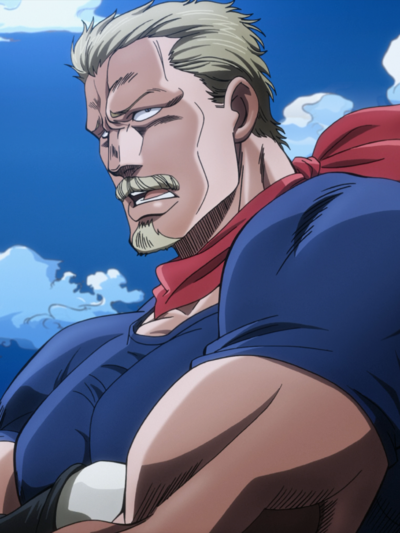 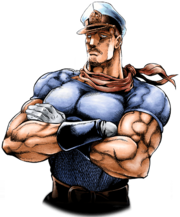 His attire is similarly ordinary as he wears a simple shirt and pants, complete with gloves, a plain kerchief tied around his neck, and a captain's cap.

The assassin is foremost methodical, originally planning to separate the Joestar Group and eliminate them one by one. However his plan is immediately foiled by a fairly dull trick from Jotaro Kujo and he immediately dives into the water grabbing Anne hostage to bait the group. He is quite confident in Dark Blue Moon's abilities, and believes himself capable of taking on the whole group together once he's in the water.[2] The impostor is also quite thorough in his work as he planted bombs on his ship to prevent the Joestar Group from sailing to Egypt.[3]

When disguised as Tennille, he appears to be a fairly aloof and stern individual. His disguise seems to be meticulous as nobody on the ship noticed.

He seems to be fond of the ocean, as he confronts Jotaro for smoking and puts out the cigarette on his cap, asking if Jotaro was going to throw the ashes and the cigarette into the beautiful ocean.[4]

The assassin's' lung capacity surpasses the human average by three times, and through practice, his personal record was 6 minutes and 12 seconds.[5]

The assassin is one of the Tarot Card representatives sent by Enya the Hag to kill the Joestar group. Seeing that the Joestar group decided to travel by sea after the attack of Gray Fly, he killed the real captain and took his place. He threw the captain into the ocean and boarded the ship with everyone else, no one noticing that he isn't the real Tennille. He planned to kill the group one by one while inside the ship.[6]

The impostor at some point plants numerous bombs in the ship to stop Jotaro and company from reaching Egypt.[7]

The impostor captain sails on the boat that the Joestar Group have taken to go from Hong Kong to Singapore. After Jotaro and Anne are attacked in the water by a mysterious creature, Jotaro has become suspicious of the crew members and believes one of them may be a Stand user.

The impostor appears after Jotaro climbs back onto the ship, berating Anne for sneaking on and then Jotaro for smoking on his ship. Jotaro quickly accuses him of being the Stand user. Although Joseph Joestar insists that the Speedwagon Foundation had checked his credentials, Jotaro decides to find out if he is the culprit anyway by playing a bluff on him: he says that breathing even a minimal quantity of smoke causes a big vein to appear on the nose of a Stand user. The impostor Captain Tennille immediately falls for it, and reveals his true identity and that he had killed the real Captain Tennille earlier.

He tries to take Anne hostage, but before he manages to do so he is stopped by Star Platinum.[8] The assassin, however, drags Jotaro underwater with his Stand Dark Blue Moon, where his Stand can fight at full power. He traps Jotaro into a vortex, attempting to slash him with Dark Blue Moon's razor scales. He even manages to create some sort of little Cirripede that can drain energy from his opponents' Stands.

Finally, by exploiting Star Platinum's ability to stretch his index and middle fingers, Jotaro stabs the enemy Stand and rips half of his head, defeating him.[9] However the impostor's bombs suddenly go off in the ship, leaving the protagonists to encounter their next enemy Stand, Strength. The assassin, however, is assumedly left to die in the sea.

Imposter Captain Tennille appears in Diamond Records as a playable character in both the Action Battle and Tactical Battle game modes. He has one 'Tactical' type 5 star statue. The imposter's moveset in both game modes is comprised of various attacks inspired by the anime, using his stand Dark Blue Moon.
Moveset

Imposter Captain Tennille's basic attack string is a combination of up to five various strikes using Dark Blue Moon. In Tactical Battle, this is cut down to only three hits.

Dark Blue Moon dives at opponents and slashes them. (Unlockable)

Dark Blue Moon weaponizes a small whirlpool of water and launches it as a projectile.

Dark Blue Moon slashes opponents and traps them in a bundle of barnacles that temporarily stuns them. (Unlockable)

Dark Blue Moon summons a gigantic whirlpool, damaging a wide range of opponents caught in the attack. In Tactical Battle, this damages all opponents present on the stage.