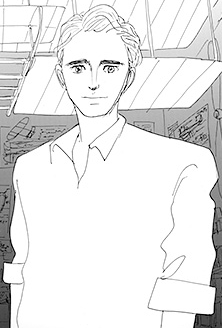 Steven is one of George's closest friends. He eventually assists George and Lisa Lisa with killing Zombies that invaded England. Steven has a Wound that grows wings from his back. He is the son of Ben Motorize and Harriet and eldest brother of Kenton and Darlington.

Steven is a tall young man with an average build. He has thick eyebrows and short wavy light hair that is kept tidy and swept to one side. He is shown wearing a collared light shirt with sleeves folded up to his elbows and dark pants when he is younger. Ten years later, he wears a flight jacket

Steven is friendly and caring of his family, described by George as being hopelessly nice. He is creative and knowledgeable in crafting various concepts of gliders. He doesn't take school seriously, believing that he could learn more on his own and would have more time to spend working on gliders while he's home.[3]

Steven is the type to bottle up his emotional and physical pain, pretending not to be angry or sad. He would smile and act like the pain of growing wings out of his back was nothing. According to George, Steven didn't have many friends.[4]

Steven develops his Wound after his mother commits suicide by throwing herself off of some cliffs, as a result of the trauma and guilt he felt from not being able to save her.

Steven can grow large white wings out of his back, made of his own flesh and bones. Steven grows his wings when he is in a hurry to save someone, although it's mostly to save his sister Kenton. Every time his wings tear through his back, Steven feels immense pain. They take three weeks to heal and go back to normal.

Steven was born in 1887 as the eldest son of Ben and Harriet. After his mother committed suicide, Steven and Kenton suffered a lot, which developed Steven's Wound ability of growing wings. Kenton eventually tries killing herself as well, and the siblings would go into a repeated process of taking their stress out on each other.[4]

controls. They named each glider they constructed "Motorizing" with a number attached to it and tested them on the cliffs. Kenton begins seeing a monster while gliding and tells Steven about it. He would appear whenever she flew in the dark or when it was raining and then do things to her plane. They didn't take it too seriously since Steven couldn't see anything no matter how closely he watched and they were used to weird things happening like Steven's wings manifesting.[5] Motorizing 5 sank in the water and Motorizing 6 was destroyed by a sudden gust of wind which smashed it against the cliff.[3] 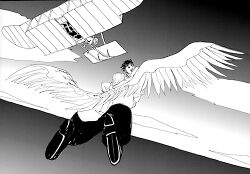 One day, Kenton goes inside their Motorizing 7 glider while Steven pushes her off the cliff. A bystander who witnesses the incident, George Joestar, quickly jumps off the cliff trying to save her, only to see that she just rose above him. Surprised, Steven jumps off as well to grab George and they fly along the surface of the ocean. George sees that the boy has wings on his back, covered in blood. Steven asks if George is hurt but wonders what he was thinking since he should have seen the glider. He tells George that everyone will be flying gliders soon enough and explains the science behind them.

Steven and Kenton give George a ride back to their house in their wagon. George finally introduces himself to them and they're surprised to learn that he's a Joestar. Their grandfather was a friend of George's grandfather, George Joestar I. Their youngest sister, Darlington, notices Steven's wings and gets angry with George because it takes three weeks for his back to become normal again.

George plans to retrieve the sunken Motorizing 5 glider at the bottom of the cliff so he can make it his own and rebuild it. Since Steven had his wings out, he does most of the work getting the glider up while George loads its pieces into their wagon. They unload the pieces at the Joestar mansion, and Steven offers to help but George is intent on learning how to build it himself. 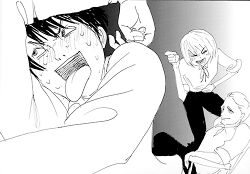 Steven, Kenton, and George continue discussing airplanes and building in their work shed. They tease George about having someone he loves already since he didn't show any interest in Darlington, and Steven points out how George lives with someone really pretty. Later that day, Kenton tells Steven about seeing the monster again and how it insulted George. The next morning, Kenton informs Steven that George invited her to the cliffs and she heads there alone.[3] Once he arrives home from school at 4 PM, Steven sees George's glider in the sky acting as a kite by the cliffs. Steven runs to the cliff with his horse, only to discover Kenton's corpse. She was murdered and George is the prime suspect.[4] However, Steven sees a silhouette of the true killer vanishing over the edge of the cliffs.[5]

On George's sixth day in jail, Steven visits him. George is worried to see him but Lisa Lisa convinces him to go. Steven had lost a lot of weight, and George could barely recognize him. Steven says that he believes George isn't the murderer and he had tried to convince his father but Ben wouldn't listen. Before he leaves, Steven expresses hope that he could fly together with George someday.[4]

Steven tries finding evidence of Kenton's real murderer to prove that George is innocent. However, Steven becomes a suspect himself in 1908. Ben has Steven flee to France, worried that they would force a guilty verdict on Steven so that the military could do experiments on him due to his Wound.[5] Meanwhile, George and Penelope theorize that Steven was the actual murderer, although George doesn't want to believe it.[4]

Soon, Steven and Ben begin researching ways to bring back the dead. They discover a folk religion called Vodou

where a sorcerer called a Bokor

could turn the dead into zombies. They learn about the Aztecs

, how Jonathan Joestar studied the Stone Mask, how Dio Brando became a vampire, and the events surrounding George Joestar I's death. They also learn of the incident in Windknight's Lot, where Dio Brando wiped out the town and created several zombies. Steven and Ben find two survivors from that town, Poco and his sister. Although they were sworn to secrecy, Poco's sister ends up revealing the truth after the Motorizes show them a photo of Dio. They learn about the ship Erina and Jonathan went on for their honeymoon and found records from the port which listed a suspicious piece of cargo. They discover that it was Dio's coffin from one of the dock workers, and another mentions that he heard a voice coming from it. Finally, the Motorizes travel to La Palma. They learn of the Mothman, the Torres family incident, and how Lisa Lisa defeated Alejandro.[5]

, which he later realizes is Steven's Motorizing plane. George had only seen the schematics for it when they were younger, before it was actually built. George wonders what Steven is doing in England since he was apparently in France. George had asked his French pilot friends about Steven, but nobody there had heard of him. Curious, George decides to go visit the Motorize home for the first time in five years.

George interrogates Darlington about Steven's plane, who eventually reveals what Steven and Ben had been up to for the past couple of years. Darlington pleads for George's help because Steven and Ben have gone too far in their desperate attempts to bring back Kenton. Steven had contacted Darlington earlier that day to tell her that he found Lisa Lisa's group of Ripple warriors. George says he'll contact Lisa Lisa and assures Darlington that her group is composed of trustworthy people who would help Ben and Steven change their minds. George manages to get in touch with Lisa Lisa and informs her about the Motorize family situation. Lisa Lisa convinces him that the Motorize men are being watched so everything will be fine, and Steven having his own airplane design will come in handy for the upcoming war.

After George makes a crash landing in the North Sea, Lisa Lisa arrives with Steven in his Motorizing plane to save him. George and Steven awkwardly gaze at each other. George couldn't decide whether he was angry for being framed for Kenton's murder or if he was happy to see Steven again. Steven was the only pilot nearby who could fly her there so they rushed to find him. George suddenly becomes jealous of the thought of Lisa Lisa and Steven getting close, but Lisa Lisa reassures him with a kiss on the cheek. Steven breaks the silence between him and George, asserting that he did not kill Kenton, and that it was a Spanish midget with no eyes who actually did. George questions Steven about his plans to bring Kenton back to life, but Steven confirms that he changed his mind after Lisa Lisa showed him a real zombie.

The trio climb into the Motorizing and head to France, leaving George's Star Shooter plane behind. Steven flies his plane, while George sits behind him with Lisa Lisa on his lap. George tells them about the rumors of the gremlins and how Faraday had seen one in 1905, just before Kenton was murdered. Lisa Lisa realizes that it must have followed George from the Canary Islands. They finally reach France and the Ripple masters take the trio to their secret underground lair.[5] 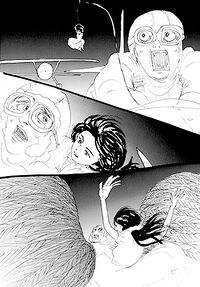 Lisa Lisa gets his wings out 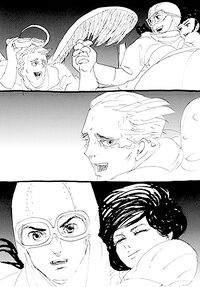 Steven thanks George after the battle

A Ripple warrior informs them that English zombies are attacking their base. Steven leads George and Lisa Lisa to two of his Motorizing planes. They get into one and Steven hops into the other. As they fly out of the cave, they notice at least a dozen English Air Force planes flying above them, dropping bombs onto the base. George and Steven engage in aerial warfare with the zombies, shooting them all down with their plane's machine guns. Steven manages to kill two zombies. As they fly toward London, Lisa Lisa taps Steven's shoulder and uses the Ripple to extract his wings out of his back, as she thought it would be useful for him.

A Frenchman named Vincent Lecoeur starts attacking George and makes a direct hit with his plane's wing. Before George's plane could crash, Steven flies under him and motions for George to jump down. After George thanks Steven for saving him, the two admire Lisa Lisa's fighting skills, as she jumps from plane to plane frying each zombie pilot with her powers. Motivated by her strength, Steven flies out with his wings, grabs Vincent Lecoeur out of the zombie's plane, and then drops him into the air.

After the battle ends, George introduces John Moore-Brabazon and Steven to each other, mentioning that John has political connections now and may be able to help Steven be pardoned from being a suspect since he helped save London. Soon, Steven is finally able to go back home to the Motorize manor.[2]

Steven as a zombie

John campaigns to be George's best man for his wedding, but it's a tough choice for George, who ends up choosing Steven instead. They have a bachelor party and John wonders if Steven drank too much when he doesn't show up the next morning for the wedding. Realizing something is wrong, George decides to head to the Motorize manor. George assumes that William Cardinal did something to Steven since Steven didn't get along with his brother-in-law. After entering their house, George discovers that Steven was murdered along with his entire family by Antonio Torres, who also turned them into zombies. He is presumably put to rest by Lisa Lisa and Penelope after they arrive at the Motorize home.[2]