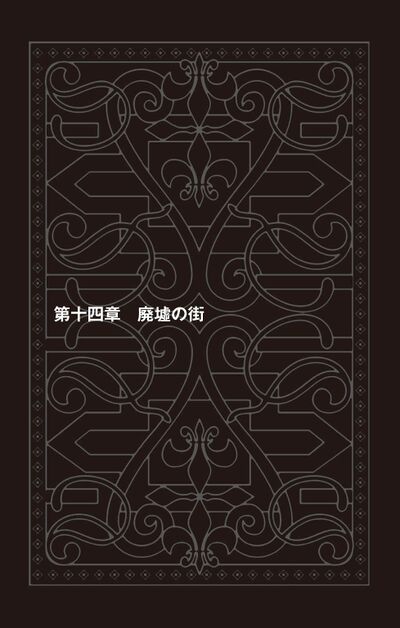 Chapter 14: Desolation Row (第十四章・廃墟の街, Daijūyonshō Haikyo no Machi) is the fourteenth chapter of JORGE JOESTAR, a light novel based on the JoJo's Bizarre Adventure series.

The spaceship of Kars smashes into the Arrow Cross House as Jorge assumes that they all are about to die. However, Kars saves them by transforming his body into a sphere. As they step outside, Jorge realizes that they are in an unfamiliar landscape rather than Morioh. Kars returns to his humanoid form, albeit in a damaged state. The extra Kars that were covering the spaceship burned up just above the surface of Earth. Kars thinks that they were short of one extra version of him for a proper landing but Pucci states that 36 should have been enough, believing the number to have holy significance. Jorge theorizes about the fourteen words and how they relate to the current events. The moving Morioh and Nero Nero Island are 'Rhinoceros Beetles', the way they fell onto Arrow Cross House is 'Via Dolorosa', Giotto is the probes that Kars made his spaceship out of, and the Earth itself is 'Hydrangea'. Narancia asks Kars why he saved them, but the Pillar Man doesn't respond, focused on healing himself. Narancia tells Jorge that they should consider running away now while they have the chance, but then discovers that they aren't in Morioh. He sends out a few hundred tiny U-Boats onto the grass, having them scout in all directions. Jorge remembers that he was still borrowing a version of U-Boat from Kars and does the same thing.

They find a sign displaying "Wastewood" as well as a newspaper dated November 11, 1920. Jorge wonders how they ended up 92 years ago and why the place looks abandoned, as they couldn't find any citizens. Narancia jokingly congratulates Jorge after he discovers a wedding venue for "Jorge Joestar" and Elizabeth Straizo. Jorge realizes that it must be the other Jorge who Tsukumojuku told him about. Jorge tells Narancia that they should check out the other Jorge's home but Pucci says that they should go to the capital, London, as something waits for them in 'Desolation Row'. However, Narancia then sees three zombie men fighting to eat a little girl. Narancia kills the three men but the girl becomes a zombie herself. Jorge, Narancia, and Pucci fight off the zombies with their Stands. Riding a large U-Boat, they decide to flee to the Joestar mansion and take Kars with them. They are greeted by a clown once they arrive, which imprisons Jorge in a locked room. The clown declares that if he isn't Penelope's friend, then he'll have to hang himself. Remembering his discussion with Tsukumojuku, Jorge yells out that he isn't the Locked Room Master and that Javier Cortes is already dead. From his words, the clown explodes along with the walls surrounding Jorge. Penelope runs outside but is perplexed to see the young Asian boy rather than the adult George she was expecting.

After Narancia starts yelling in Italian, Penelope tells them that she doesn't know what's going on with the island and asks them to leave but Erina arrives to greet her guests. As Jorge talks to Erina, three zombies appear behind them but Penelope entraps them with her Wound. Jorge wonders how Erina could tell that he was Japanese, so Erina reveals that she's been running a trading company for some time and Jorge's soft smile that's particular to Japanese culture reminded her of Japanese people that she had done business with. Jorge explains about Tsukumojuku and how quite a lot had happened. After Jorge mentions that they're going to London to find the 'Way to Heaven', Penelope asks to come with them. Erina has doubts but Penelope convinces Erina to let her go, believing the whole mess to be her fault since she made Great Britain into a giant locked room. Penelope promises to bring back Elizabeth with her and the two hug. She also apologizes that Erina will have to take care of Joseph on her own now. Hearing the name of his adoptive grandfather, Jorge asks to see the baby Joseph, despite Jorge's grandfather being the son of Jodoh Joestar and Maria Urias Zeppeli. Suddenly, Kars appears beside Jorge, interested in seeing his archenemy as a baby. Erina and Penelope protectively jump in between Kars and Joseph, but Kars declares that he has no intention of harming the baby because history may be altered.

Penelope heads back with Jorge to U-Boat and Narancia cackles about how Jorge could pick up a girl in the situation that they're in. Penelope introduces herself to Kars and Pucci and then explains everything that happened so far in England, as well as her abilities. They calculate how many copies of Antonio Torres there were, learning that around 920,000 Antonios created the giant wall that Penelope made. After talking with Jorge, Pucci is happy to learn that all they need now is one more 'Rhinoceros Beetle', a 'Spiral Staircase', two 'Singularities', and the 'Secret Emperor'. He reveals that the 'Fig Tart' was the sweet scent made from Kars's body burning during their reentry to Earth.

Meanwhile, Bucciarati calls them on the pebble phone and Jorge relays the situation they're in. Bucciarati explains that Reimi fixed the holes in Arrow Cross House after the spaceship crashed through it. There are only minor injuries on either side of the war with the American army, and the latter is starting to surrender since nobody could contact headquarters or leave the island. After the spaceship crashed, Morioh's barrier came back up but the island's power went out. Only Arrow Cross House still has light, water, and gas. Bucciarati also reveals that they found the dead bodies of Diavolo and Yoshikage Kira in the study of the Arrow Cross House, where they had somehow been lying for at least twelve hours, despite Jorge and Rohan having been in and out of that room all day. He shares footage from Leone Abbacchio's Stand Videodrome, depicting a holographic display of Diavolo and Kira's sudden deaths with their throats being slit. Videodrome records everything that happens to someone for 24 hours after midnight and cuts off at the moment of their death, meaning that there are no records of Diavolo and Kira from midnight until 8 am. They just suddenly appeared in Arrow Cross House at 8 am, where they were killed in approximately one second, and nobody noticed their bodies. Kira was calling himself Kosaku Kawajiri and worked in manufacturing. As the investigation on Kira grew closer, he brutally murdered both his wife and child. Diavolo had also killed far more than a hundred people, including victims from enemy crime syndicates, civilians, politicians, law enforcement, and his own men. Bucciarati states that Jorge shouldn't bother trying to deduce how they died since the world is better off with villains like them dead. With Heaven's Door, they also learned how Kira and Diavolo had time manipulating Stands. Jorge realizes that Cube House must be a device to bypass spacetime, and Tsukumojuku had learned how to use it. Cube House takes the person falling and sends them to help someone in the world who they would be most useful to, including other universes. It seems to obey voluntary commands allowing people to think of where they want to travel to, but it prioritizes the will of someone who needs their help.

The group arrives at London, where Pucci is greeted by Funny Valentine. Funny reveals that Manhattan Island is the final 'Rhinoceros Beetle'. With Funny's help, Pucci learns that the two 'Singularities' is his connection with himself. Pucci knows Funny Valentine well in his own universe, but not this version of Funny from another universe, thus creating a 'Spiral Staircase'. Finally, Funny introduces them to the 'Secret Emperor', Dio Brando. Seeing holes in Dio's hands and feet, Pucci weeps for his lord as arrows appear all over Whitesnake's body. Pucci levitates and becomes the center of gravity, unleashing his new Stand C-Moon. However, C-Moon's body then cracks and Made in Heaven emerges from it. Just before Pucci could activate Made in Heaven, Dio holds up his hand. The giant wall surrounding Great Britain formed the upside-down upper half of a giant version of Antonio Torres. The giant Antonio looks down at them and grabs Pucci, swallowing him to send him outside of the barrier. Pucci then activates Made in Heaven within Antonio's belly, speeding up time outside England. The universe loops 36 times, bringing the island of Great Britain to 2012 in the 37th universe. Jorge wonders if their six month journey from Mars back to Earth only took four hours because of Pucci, but Kars reveals that the priest had a complicated flow of time compressed within him. At the same time he was on the spaceship with them, he was also in another universe killing someone.

(Mentioned only)
The Funniest Valentine
Stands