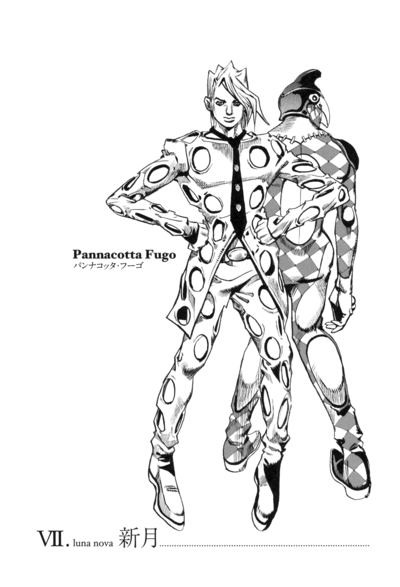 Volpe remembers his own past during his fight with Sheila E, revealing an apathy for the world around him, his lack of passion, and that he is, in fact, Tonio Trussardi's younger brother. Born as Antonio Volpe, he left their aristocratic family in Italy to pursue a career as a chef and later changed his named to "Trussardi", after their mother's maiden name. This also left Massimo Volpe the next in line with his brother having been disowned. Before saying their goodbyes, Volpe wondered why Antonio had to change his name. Antonio worries that their father will care about him carrying the family name, to which Volpe retorted by saying that he did not need to - whatever happens will happen, although he is confident that nothing will happen to his brother lest he kept his identity as a Volpe. Antonio, disturbed by his answer, asked Volpe if he had his own dream. He gave one final advice for him to look after himself because of his ignorance to the state of the world and soon departed on a train.

In the years that followed, the Volpes' debts mounted to a point where Volpe had to sell himself and his family title to Passione and produce narcotics for the drug trade. His father also became a junkie from the drugs that he had made. Volpe subsequently met Fugo in college whom he immediately despises for putting up a façade as a model student despite being apathetic like him. However, after Fugo's expulsion, Volpe remained cautious about confronting Fugo once more in the future.

In the present, Fugo is assailed by a mob while trying to find Sheila E. With Manic Depression's drugs and Nightbird Flying's ability to scatter the effect to everyone, Fugo almost succumbs to them. In the middle of the horde, Angelica manages to stab Fugo until he unleashes Purple Haze's virus. The drugs affecting the mob wear off, freeing him again. Noticing Nightbird Flying's ability wearing off, Volpe frantically looks for Angelica whom he soon finds staggering towards him. He is relieved to see her, and she tells him that his smile is cute before she collapses to the ground.

Volpe, enraged, screams into the night and approaches Sheila E. Defeated, she is held hostage by Volpe at the Temple of Apollo. He tortures her with Manic Depression to call out for Fugo, but she is too weak to answer due to his fingers around her throat and nearly passes out. Suddenly, Volpe's hand is cut off by Fugo, who finally appears to confront him. Having finally found a common point with Sheila E, he understands the empathy his old companions felt for each other. The two begin to battle, but with the use of Nightbird Flying's remaining powers which Volpe had kept alive albeit at the brink of death, he narrowly avoids Purple Haze's fists with the virus capsules seemingly gone from its knuckles. Fugo's newfound resolution upgrades Purple Haze in time before Volpe can make a fatal blow. Inches away from Volpe and having kept a virus capsule in his mouth, he breaks it and sprays the virus into Volpe's face, who dies an explosive and horrible death instantly. Fugo then breaks another capsule to counter the previous virus and manages to survive.

A dumbfounded Sheila E can only watch as Volpe's body evaporates into the wind and later passes out. Murolo appears in the temple, noting that Stand users reflect their own Stands, which is how Purple Haze had evolved into a new form due to Fugo's resolve. Nevertheless, Fugo notices that his Stand isn't the same as before, seeing it stare at him. Before passing out, he sees Nightbird Flying fly into the moon and vanish. The mission is finally complete.