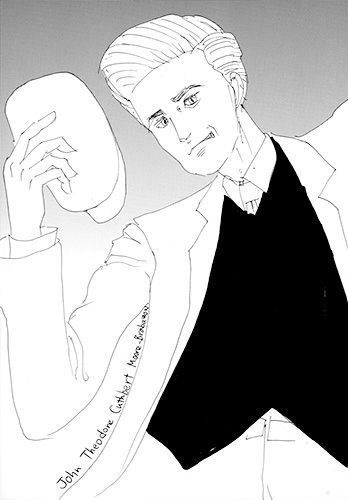 John is one of George's best friends. At first, he's a college student who works at an automotive garage in London as a private mechanic for Charles Rolls. He later becomes the first Englishman to officially fly a plane on the Isle of Sheppey and eventually helps George, Lisa Lisa, and Steven Motorize save England from the invasion of Zombies. He retires from aviation and becomes a politician.

John is a tall man with a fit build. His hair is slicked back and he wears a suit. George's first impressions of John is that he wears an expensive suit poorly.[2]

His aviator hat when flying has a large B on the center.

John Moore-Brabazon is rich and talented, being a skilled mechanic and owning four cars for himself at a young age. When he is still a college student, he speaks rudely and acts quite childish for his age. He can also be aggressive, yelling at George to stop staring at him while working and then throwing a wrench at George's car. Despite being George's friend later, John is very good at making fun of people, and every time George sees him, John would insult him so tenaciously that George would wind up fighting back tears.

John loves adventure and has a competitive nature, participating in several races and challenging George to them. While racing, he is more interested in having fun and enjoying himself to the fullest than winning.

John doesn't care about George being on trial for murder, even if he actually does end up being the culprit. He believes most men will become murderers anyways after the upcoming war.[2]

He cares a lot for those he is close to, such as his boss and his old friends.[3]

John is a student who first works at an automotive garage in London as a private mechanic for Charles Rolls. He is the star of the Royal Automobile Club. George first thinks that John stumps around the garage and scowls at every car like a bold thief.

Four of the seven cars in the garage at the time are owned by John for work-related research and the remaining three are test designs given to him by his boss. None of the mechanics but John are allowed to touch any of those cars. George starts admiring his handiwork and gets lost in thought until John yells at George to quit staring at him. The two get into a fight when John throws a wrench at George's car leading to George attempting to run John over. John runs out of the shop and jumps into a working eighth car he had parked out front and drives away. They end up in a car chase through the industrial district, although it isn't much of a contest since John's car is twice as fast as George's. John drives in circles around George, insulting him and calling him childish names while George begins to cry. John laughs and then challenges George to a race through all of London. They startle horses and pedestrians along the way and start getting pursued by mounted police but manage to escape, heading back to the garage.

George describes John's handiwork to be like magic, as any car he fixed would run and turn better than before. If he drove off in a car and came back, when he stepped out of it the entire vehicle would look polished to a new level of beauty. When he raced, he was less interested in winning than in enjoying himself to the fullest. His results were too inconsistent for gamblers, but as a spectator his performance was full of gasp-inspiring moves and previously unheard of strategic maneuvers. The other drivers considered him one of the best. As George was John's only younger friend, John quite likes him and often gets George into trouble. John says it doesn't matter if George killed Kenton Motorize or not, because soon all men will go to war and become killers.

In later years, George finally starts beating John in RAC races. John goes off to a circuit race in the Ardennes in Belgium. He drives a Minerva 600 kilometers in six hours, fourteen minutes, and five seconds and wins the race. Afterwards, John calls George to let him know that his boss wants to start working on planes next.[2]

John is the first Englishman to officially fly a plane on the Isle of Sheppey. A year later, his boss dies in an airplane crash and John decides to never fly again. He starts working as an engineer in the city.[2]

George calls John and informs him about the large English squad flying planes in the sky actually being zombies. John cries to see what his dead friends have become. He starts panicking and is about to hang up the phone until George convinces him that he needs to fight too, so that their friends can rest in peace. John manages to gather nine other men and they destroy several zombies by controlling the perimeter and keeping them trapped in London. They meet up with George, Lisa Lisa, and Steven Motorize, flashing their lights in Morse code to prove they aren't more zombies. As John is involved politically, George asks John to help Steven get a pardon by saying he helped save London.[3]

While working in politics, John constantly quarrels with William Cardinal. In November, John campaigns to be George's best man for his wedding. It's a tough choice for George, who ends up choosing Steven instead.[4]