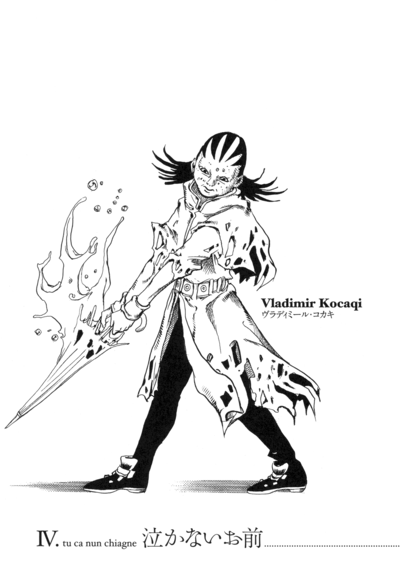 Ⅳ．tu ca nun chiagne (泣かないお前, Nakanai Omae, lit. You Who Does Not Cry[a]) is the fourth chapter of Purple Haze Feedback, a light novel based on the JoJo's Bizarre Adventure series.

In a flashback, Abbacchio's influence in Fugo's life is detailed. When Abbacchio was sent to a trial after getting caught accepting bribes from a Passione thug, Fugo visited the ex-cop to investigate about a drug trade within Passione involving the thug. Abbacchio said nothing and only asked Fugo where he gets his confidence since both of them are not too different. Fugo merely replied that he had sworn loyalty to Passione which later inspired Abbacchio to join the gang.

Fugo and Murolo continue their search for the Sezione Droghe in Teatro Greco as it rains on the island. While telling Fugo about his fragile temperament, Murolo spots Vladimir Kocaqi and begins to flee. However, Fugo approaches him closer to let him to enter Purple Haze's range. Kocaqi confronts Fugo about his temper and contrasts the Sicilians' forbearance to his impatience as well as his way of attempting to make things right. Fugo is surprised to see that he hasn't snapped and attacked yet despite being insulted by the enemy. Hesitant to attack Kocaqi, he moves forward before staggering due to the ground crumbling underneath him. Suddenly, his body loses balance entirely and he realizes that he has been caught in Rainy Day Dream Away's ability to lock any feeling or sensation. With Fugo trapped into falling across the ground forever, Kocaqi leaves him to look for Murolo and Sheila E.

Sheila E hears Fugo's screams and rushes to Teatro Greco where Murolo and Kocaqi await her. She immediately unveils Voodoo Child and attacks Kocaqi who barely avoids her Stand's fists. Kocaqi's wounds turn into lips which speaks in his dead sister Amelia's voice instead of his own. He claims that he has no guilt, making him immune to Voodoo Child's abilities. He narrates his indifference towards his tragic past, particularly Amelia's death in 1946 during World War II and his Stand's first appearance. At the same time, he traps Sheila E into thinking that she couldn't beat him and locks that feeling inside her. Kocaqi tells her that he will not kill her before turning to Murolo. Meanwhile, an incapacitated Fugo reminisces of the old gang, especially when Bucciarati found out about his and Abbacchio's investigations of the Boss' involvement in the drug business. As Fugo notes his memory of Bucciarati's emotionless but pained reaction, knowing that his father had been killed for accidentally stumbling in a drug deal, he feels a sudden urge inside him.

Kocaqi walks closer to Murolo who can only scramble backwards. They are interrupted by a loud thunder in the distance. Kocaqi realizes that Fugo had used Purple Haze to blindly throw himself in the sky and exploit Rainy Day Dream Away's ability by falling at the same speed as the raindrops. Fugo and Purple Haze fall towards Kocaqi and the Stand's fist fatally hits Kocaqi, who instantaneously dies from the impact of the blow and his body melts due to Purple Haze's virus. Voodoo Child catches Fugo before he can hit the ground. Suddenly, he strangles Sheila E by the neck. Murolo commands Sheila E to withdraw her Stand because its arms had been wrapped around Fugo too tightly that his spine could snap at any moment.

After putting Voodoo Child away, Fugo releases her throat. Sheila E notes the empty look in Fugo's eyes and looks around for Kocaqi's body. She shivers after realizing that his body vaporized from Purple Haze's infection. Even though Fugo saved the three of them, she could not be grateful for him. As the rain stops and the sky emerges behind the rain clouds, Sheila E does not feel anything more than gloom.