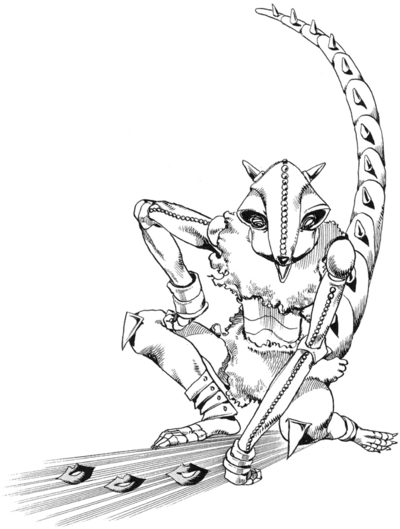 Voodoo Child (ヴードゥー・チャイルド, Vūdū Chairudo) is the Stand of Sheila E, featured in the light novel Purple Haze Feedback. It is a humanoid Stand with rat-like features. It can create lips that will repeat anything someone has said in the vicinity.

Voodoo Child resembles a humanoid rat. It is 2 meters in length, including a tail 1 meter in length. The stand has a generally human-like body, with scrawny arms and big, clawed feet. Down the middle of its head and on the sides of its arms are lined jewels.

The head is slightly shaped like a rat's, with large protruding hollow eye sockets, and possibly a small lower jaw. Two horns on the top of its head are akin to ears. Soft flurry fur covers its chest and pelvic region. Metal-like plating rims its wrists, hands, ankles and feet, with similar triangles on each knee. The Stand's tail is long and segmented, with upward protruding spikes on each section.

Whenever Voodoo Child punches, a pair of lips appears. These lips then repeat whatever was said or thought by anyone that was near the punched location, similar to a planted recording device. The lips will take the appearance of the mouth of whoever has spoken.[1]

If Voodoo Child punches someone, the lips on the target can also draw out their deepest secrets and openly repeat it, causing emotional damage, and possibly death depending on the target person's mental strength. If the target has no guilt in their heart, such as Vladimir Kocaqi when confronted by his dead sister's voice, then the ability can be removed easily.[2]

The lips operate as a normal mouth would, giving them the ability to bite or pull on objects. Voodoo Child can create as many lips as desired.