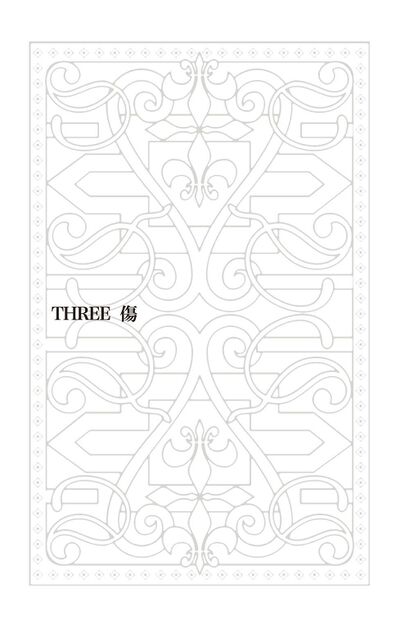 THREE: Wounds (THREE・傷, Surī Kizu) is the third chapter of JORGE JOESTAR, a light novel based on the JoJo's Bizarre Adventure series.

George worries about Tsukumojuku presumably being dead since he is missing. Assuming his days of adventure are now over, George begins taking school more seriously so he can become intelligent like Tsukumojuku. He starts small by reading novels. He begins to start liking science after enjoying science fantasy novels, so Erina decides she should hire a tutor for him. Thinking Penelope de la Rosa would be a good tutor, George goes to her house. Penelope is a girl older than George who he and Tsukumojuku met on their last case. She helped them catch Javier Cortes, as she was one of his victims. Due to her pathological fear of clowns, she was so afraid after her dreams that she stopped going to school and never left her house. Penelope refuses to open the door when George arrives at her house, because seeing him reminded her of the clown in her dreams. However, the next night, Penelope comes to see George looking very upset, yelling that Javier is back.

Penelope collapses in George's arms and panics while George tries calming her down. She explains that after George visited her the previous day, she couldn't go back to her room. The doors and windows were locked so she decided to go to her kitchen where her mother was, but then the kitchen door suddenly slammed shut as well. Penelope's mother started screaming and begging Penelope not to kill her. Penelope threw herself into the door several times until it finally broke and saw a clown in the corner of the room before it disappeared.

Penelope's parents had divorced four years ago and her mother, Isabella, had full custody of her. Penelope blamed her mother for taking away her father, leading to a strained relationship between the two. Their relationship worsens when Penelope begins dating Edvard Noriega, a thug who beat her, sold her valuable items, and threatened to ruin Penelope permanently if her mother interfered. Penelope then started getting her dreams with the clown and realized her mother is the only one she could trust.

George invites Penelope inside only to realize that the door of his house is suddenly locked. He wonders why Erina would shut them out, until Erina tells George to run because a clown is inside. George kicks the door down and directly sees the clown for himself. He swings a chair at it causing the clown to vanish by shattering into pieces. Erina tells George to calm down, realizing that Penelope is the one who was creating the clown somehow, as a means of protecting herself. The clown suddenly returns, locking them inside by wedging a heavy table under the doorknob. George realizes that the clown has a long white thread dangling from its hip, leading all the way to Penelope's dress. George calmly moves aside the table and exits the house, calming Penelope down. He realizes that her power is the same as what Antonio and Javier had. Eventually the thread from Penelope's dress snaps, causing a doll in a noose to drop behind the door. George explains to Penelope that she created all of this.

Later, George tries explaining Penelope's power to her mother but her mother thinks Penelope is possessed by the devil. Erina decides to let Penelope live with them and hires her to work in the La Palma office of Erina's trading company, as well as to be George's tutor.

One day in February, six months after Penelope moved in with the Joestars, she asks George to accompany her to work out of paranoia that someone was following her. On their way to work, Penelope's ex-boyfriend, Edvard greets her. She tells him to go away but Edvard says he's dying. He starts panicking and begs for Penelope's help, retelling how he saw a creepy guy with wings. Penelope angrily tells him to shut up, saying he deserves whatever happens to him. Edvard starts apologizing and continues his story. Two nights prior he was lying in bed with a girl named Prunella when he suddenly sees the man standing by the base of his bed, as black as a devil. The man with wings told Edvard to close his eyes, lie down, and think about tomorrow. While Edvard is telling his story, Penelope goes berserk with emotions, to the point where she gets a nosebleed. She creates a locked room from the ground, trapping Edvard with a clown inside. George decides to name her power a Wound based on its origin.

Penelope is about to kill Edvard but George tries to stop her from becoming a murderer. She says she can't because it's the clown doing it, not her. George then forces a hole into the locked room by ripping into the grass and dirt walls. Edvard was hanging from a noose attached to the ceiling, and suddenly George is hanged by a grass rope as well. He panics as he nearly chokes to death, before he realizes that the point of a locked room is to make murder look like suicide. If he somehow leaves evidence behind that it is actually a murder, it would break the purpose of a locked room. He pulls a knife from his back pocket and stabs his belly, writing out "MURDER". Before George loses consciousness, the clown reads the message and disappears, destroying the locked room as well. George throws up several times but is relieved to see that Edvard is still alive. Penelope grabs George and cries, apologizing at the same time.

At the hospital, the doctor tells George that he dug too deep and the word "murder" would remain upside down on his belly forever. Lisa Lisa suddenly appears in the room and asks George if he's still being bullied. She doesn't believe that George would do it to himself. Penelope says that it's her fault, apologizing once more. The two women get off on bad terms after Lisa Lisa tries introducing herself, leading to George interrupting before Penelope would summon a locked room again. Lisa Lisa explains finding George in the hospital was a coincidence because she had a question for the doctor. She asks the doctor if he's had any patients claiming to see a man like a moth, just like Edvard had told George and Penelope earlier. The doctor says several patients have been having nervous breakdowns and while at first he thought it was an illusion or some sort of mass hysteria, he then saw the man with black wings as well. Lisa Lisa warns the doctor not to do what the man says and to lock himself in his house that night.

The three walk back home and find Straizo and Erina inside sipping tea. Lisa Lisa tells Erina that it's time to tell George the truth about his father. Erina then describes the life of Jonathan and Dio Brando, leading to Jonathan's eventual death on their honeymoon. Straizo and Lisa Lisa wonder if there is a Stone Mask on the island because it's the second incident of something supernatural occurring. Lisa Lisa explains that she and Straizo had spoken to the fisherman that rescued Erina and the baby Lisa Lisa from the coffin years ago. It was a large coffin designed to shield the occupant from external blows and the fisherman witnessed Erina also holding something else, about the size of a human head, wrapped in a bundle of fabric made from the hem of Erina's dress. Lisa Lisa questions if Erina had actually brought Dio Brando's head to the island. Although George says Lisa Lisa is being ridiculous, Erina breaks her silence by saying it wasn't Dio's head. It was her husband's, Jonathan's. George is scared of his mother for the first time.