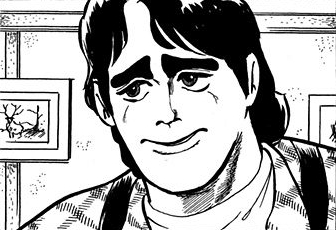 Killed by a cocktail molotov

Don Peckinpah (ドン・ペキンパー, Don pekinpā) is one of the main characters of Poker Under Arms. He is a tough outlaw and skilled player at poker who meets his equal in Mike Harper and plays the toughest game he's ever had yet.

Don Peckinpah is a tall athletic man with black hair cut into a mullet. He has a square face with a strong jaw and large straight eyebrows.

Don Peckinpah wears a simple light jacket with a tartan, a bell-bottoms, a pair of santiags, and keeps his gun in a holster on his right leg. He also wears suspenders.

Don Peckinpah is an affable, sly and brutal outlaw who's comfortable living in constant danger.

Don Peckinpah is a murderous outlaw who is said to have been born evil. He's described as have done any evil thing he could, has killed 27 people so far, and has a bounty of $10,000 as a result.[1] Don Peckinpah is shown having gunned down a man without thinking about it twice. When he loses against Mike Harper, Peckinpah loses his calm and threatens to kill a beggar,[2] then draws his gun on Harper with he learns that Harper is cheating.

Don Peckinpah is also fairly proud and sly. While he actually complimented his would-be assassin on his ingenious attack, Peckinpah then insists that he was still the fastest draw and the smarter man.[3] Peckinpah makes it a point to show off at cardistry just to assert his dominance, and doesn't take it well when Harper begins to beat him; likewise, Harper's ways of casually outsmarting him in a conversation irk him. While he begins to get angry, Peckinpah attempts to perform a devious scheme: he goads Harper into betting his gun, knowing that bounty hunter will kill him the moment he's disarmed, and tries to cheat at poker. When he thinks of an evil plan, Peckinpah harbors a sinister grin.

Peckinpah maintains an affable facade, being cordial to the average citizens of the town he's currently in (for instance, he does pay his barber despite being an outlaw). He also strikes a conversation with Mike Harper and tries to be friendly.

Peckinpah considers that remembering things is stupid and prefers to forget, although Harper having a better memory annoys him.[4]

Don Peckinpah is a seasoned gunman and outlaw. He is a good shot with his gun and is actually able to draw faster than the average man while hitting his enemies right in the chest. He also has good instinct and can feel when someone is here to kill him and can react accordingly.[5]

Don Peckinpah is exceptionally good at manipulating cards. He is able to flick a card into a pile to take out a particular card,[6] and is able to switch four of his cards without anyone noticing.

Don Peckinpah is an infamous outlaw who has managed to amass a bounty of $10,000 and has killed 27 people. Despite this, he is so skilled with his gun that he's managed to kill all the bounty hunters who tried to ambush him.

At the start of the story, Peckinpah has just killed his latest victim, a bounty hunter who tried to ambush him at the barbershop. Peckinpah is impressed by the cleverness of the ploy but states that it wasn't enough because he is smarter and a faster draw.

After leaving the barber, Peckinpah enters a bar and orders a drink. At the bar, he overhears a group of poker players and asks if he can join them. One of the players, Mike Harper, is an equally skilled gunman with also bounty of $10,000 who's just arrived in town. To show off, Peckinpah takes four cards and flicks them into the deck to push out the four aces. Not to be outdone, Harper then mixes the deck so that the four aces end up at the top, scaring the other players away. The two gunmen agree to play one-on-one.

Mike Harper quickly reveals himself to be the better player and keeps winning. Frustrated by his losing streak, Peckinpah takes out his anger on a drunken old bum interrupting the game. Regaining his composure, Peckinpah devilishly suggests that they bet their guns to make the game more interesting, which would the loser defenceless against anyone wanting to claim their bounties. Unaware of the bluff, Mike Harper reluctantly agrees. Peckinpah secretly switches his cards and reveals his hand, four of a kind in queens. Unfortunately, Harper has also cheated and also has four queens. When the bum points this out, Peckinpah and Harper throw the table and draw. At this moment, the old bum throws a molotov cocktail at the two gunmen, killing both.[7]