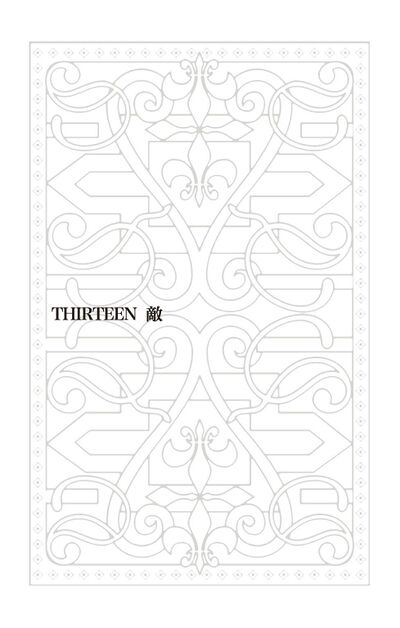 THIRTEEN: Enemy (THIRTEEN・敵, Sātīn Teki) is the thirteenth chapter of JORGE JOESTAR, a light novel based on the JoJo's Bizarre Adventure series.

George and Lisa Lisa theorize about Antonio Torres and how he could operate in daylight by hiding inside human bodies like Jim Graham's. They worry about his capability of quickly creating zombies all over the world. Straizo asks how they can fight zombies inside fighter planes, but Lisa Lisa assures him that George will shoot all the zombies down. Just then, a Ripple warrior informs them that English zombies are attacking their base. Steven leads George and Lisa Lisa to two of his Motorizing planes. They get into one and Steven hops into the other. As they fly out of the cave, they notice at least a dozen English Air Force planes flying above them, dropping bombs onto the base. George and Steven engage in aerial warfare with the zombies, shooting them all down with their plane's machine guns. George feels bittersweet over shooting the zombies as they were his old friends, but he is glad to avenge them by killing each Antonio. As Lisa Lisa praises George's skills, another Antonio appears, angry that George grew up into an adult before he did. Lisa Lisa suddenly declares that she and George should get married after this war, before grabbing Antonio and turning him into dust.

After killing over twenty-three zombies, George realizes that the battle is feeling too easy so it must be a diversion for something else. Worried about his mother's safety, George calls Erina at work and tells her to go back home and hide with Penelope. Erina also informs him that she just saw several English planes fly off. George calls his friend John Moore-Brabazon afterwards, who is now working as an engineer in the city after he quit flying planes. George explains to John that the men in the planes are actually zombies of their former comrades. At first, John is at disbelief but he quickly believes George is telling the truth and mourns the loss of his friends. The zombies flying the English planes suddenly start attacking London causing John to panic. However, George motivates him to fight and gather as many men as he can.

As they fly toward London, Lisa Lisa asks George for a quick rundown on how to fly planes. About an hour later, she gets the hang of it and pushes the flight stick to have their plane be directly in front of Steven's. She then jumps out of the cockpit and lands onto Steven's plane. She taps Steven's shoulder and uses the Ripple to extract his wings out of his back, as she thought it would be useful for him. Lisa Lisa then heads back to George's plane as the war continues. They promise each other that they'll both live and get married. A Frenchman named Vincent Lecoeur starts attacking George and makes a direct hit with his plane's wing. Before George's plane could crash, Steven flies under him and motions for George to jump down. After George thanks Steven for saving him, the two admire Lisa Lisa's fighting skills, as she jumps from plane to plane frying each zombie pilot with her powers. Motivated by her strength, Steven flies out with his wings, grabs Vincent Lecoeur out of the zombie's plane and then drops him into the air. George is confronted by Jim, now a zombie, and decapitates his old friend with his plane's wingtip. Finally, Lisa Lisa destroys the last zombie in the sky and jumps into George's plane, hugging him. Meanwhile, the zombies who were shot to the ground are all destroyed by the Ripple warriors. George sees ten more English planes approaching from the North, flashing their lights in Morse Code to prove they aren't enemies. It was John Moore-Brabazon, who followed George's advice and gathered a group of men. They controlled the perimeter, keeping the zombies trapped in London. George introduces John and Steven to each other, mentioning that John has political connections now and may be able to help Steven be pardoned from being a suspect since he helped save London.

The Ripple warriors begin investigating England and institute a national health exam to make sure there are no zombies hiding inside citizens. Steven goes back home, Lisa Lisa travels with the Ripple warriors, and George continues fighting in the World War. William Cardinal survives Antonio's attack on the Naval Air Force base with only a broken leg. He tells everyone that he was the one who ordered George to fight in London, and then everyone treats Cardinal as more of a hero than George. Cardinal gets promoted to become the supreme commander, and never has to go on any dangerous missions but still acts like a big shot. When the war finally concludes, George heads back home to the Joestar Mansion. George starts worrying about what Lisa Lisa thinks of him because the two hadn't seen each other or even contacted each other in three years. He realizes that they were only together for two weeks in the last seventeen years, but it felt like they spent a lot more time together. Determined to revitalize his relationship, George heads to Switzerland after Erina tells him where Lisa Lisa currently was.

As soon as George finds Lisa Lisa, he asks why Lisa Lisa wanted to marry him if she doesn't love him. He becomes speechless after realizing what he said sounded like an immature toddler, but Lisa Lisa just laughs and assures him of her genuine love for him. Lisa Lisa apologizes about not going to see George, but reveals that she became worried after Tonpetty prophesied that George would die around the time they get married. She starts crying but George promises that he won't die and leave her alone. George becomes enraged at Tonpetty, but his anger dissipates after feeling the Ripple master's aura. After speaking with Tonpetty, George begins to accept his fate. However, Tonpetty suddenly looks puzzled, claiming that there is a god looking out for George and if George believes in this power, then he won't die. On the other hand, if he can't put his faith in it, he'll be brutally murdered by something terrifying. George realizes that he must believe in Beyond, which Tsukumojuku had told him about.

George and Lisa Lisa head back home and announce their engagement, while also planning for their wedding. George is relieved to see how happy Penelope is since she and Lisa Lisa disliked each other when they were younger. Penelope insists that if it was anyone else she would be jealous, but she's glad that George is marrying Lisa Lisa. After hearing that Lisa Lisa is pregnant, Erina, Penelope, and Speedwagon, are extremely happy. She decides not to tell Straizo just yet until things have settled down. Speedwagon starts sending them numerous baby gifts for both genders until the baby is born. They name their son Joseph Joestar and even as a baby, the boy inherited Lisa Lisa's Ripple talents. George would get shocked every time he tried holding him or changing his diaper, so Lisa Lisa gave him a scarf made of the Satiporoja beetle's thread. They set their wedding date at the end of the year so that Joseph would be big enough. John campaigns to be George's best man, but it's a tough choice for George, who ends up choosing Steven instead.

On the day of their wedding, November 11, 1920, John notices that Steven hasn't arrived yet and offers to be the best man in his place. George decides to quickly sneak out to the Motorize manor but tells Penelope, the maid of honor, beforehand. She asks why not anyone else go instead, but George feels that it would be easier to go there himself. Cardinal had taken over the family affairs and while working in politics, John constantly quarreled with Cardinal. George assumes that Cardinal did something to Steven since Steven didn't get along with his brother-in-law either. George arrives at their house and rings the doorbell, but nobody answers. The door was left unlocked, so George enters and gets an unsettling feeling. Their house is seemingly empty, but George hears groaning coming from deeper in the manor. He grabs a fireplace poker and heads upstairs. In the hallway, he sees Kenton Motorize in pajamas with her head covered in blood. She had become a zombie and lunges toward George. George has no choice but to stab the poker through her head and says goodbye to his old friend. Just then, Cardinal points his gun at the back of George's head. George manages to use the poker to knock the gun away, cutting Cardinal's hand in the process. However, both George and Cardinal realize that Cardinal's hand isn't bleeding so he had actually become a zombie already. Antonio reveals himself, hiding inside Cardinal's body and eating his organs. George passes down the hallway and sees that Steven, Ben, and Darlington were also murdered and turned into zombies.

Antonio describes how he's only following his boss's orders but enjoys torturing George nonetheless. George looks out the window and sees a flock of 920,000 Antonios gliding outside like flying squirrels. They surrounded all of England, planning to have their boss take over the country. Antonio gets the upper hand in the fight and George nearly passes out after a punch that sends him flying, slamming his head onto a wall. Antonio hits George's head several times with the blunt side of the poker, disappointed in George for being weak and then mocks his genitals. He pulls George's pants down, starts attacking George below his back, and then vomits after seeing his crotch. George manages to summon Tsukumojuku's spirit one last time by believing in his Beyond, and Antonio is shocked to see him still appearing young. Tsukumojuku teleports George to 2012 in Morioh, leaving Antonio and the zombies. Lisa Lisa and Penelope arrive at the Motorize residence and cry, assuming that George had died due to the shredded pieces of his uniform on the ground. Lisa Lisa tearfully kills Antonio and the body of Cardinal he was possessing. Furious at George's supposed death, Penelope accidentally creates a locked room made from the 920,000 flying squirrel Antonios and torn up bits of them. The giant locked room surrounds the whole world, swallowing everything up.