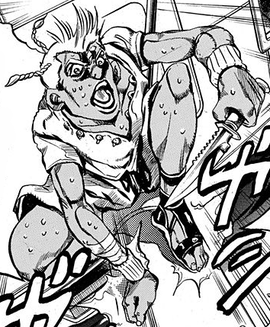 Dolce and His Master
“
These are dice... You roll them... Roll them once and whoever gets the more dots gets to eat this candy. Me or you... No matter who eats it, our friendship won't change... alright?
”
—Masago Ayashi, Dolce and His Master Chapter 1

Masago is a thirty-two-year-old first-class architect who owns a small yacht named "Lagoon" and a cat named Dolce.

Masago Ayashi is a young athletic man, being noticeably tan and having light hair, cut into a mullet, as well as having two short braids on the top of his head.

He wears a light-colored shirt and shorts, dark sandals, and wrist warmers. He also sports a band-aid on his forehead.

Masago is cowardly and delusional during the story. This is presumably because he is starved and incredibly exhausted after his yacht has been stranded at sea for six days. He often blames others for his situation, such as a woman who he brought with him as well as his cat, Dolce. He switches between acting friendly towards Dolce and being completely insane. Due to his hunger, he ends up finding blood extremely tasty. 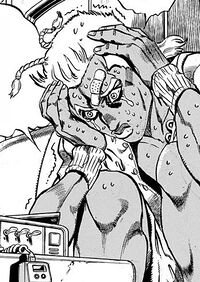 Blaming the woman for their accident

Masago takes his yacht to sea one day after meeting up with a young woman. However, the woman takes off her clothes while on the deck and Masago gets distracted. The yacht hits a rock which throws the woman off the yacht and causes her to drown. Masago manages to recover her body but she had already died. Six days later, Masago spends the time sobbing and hoping for someone to rescue him, although his radio transmitter got wet and stopped working. He sees his cat Dolce wandering around and is grateful that he brought his cat with him, stating that Dolce was the only thing still keeping him sane despite the two of them having no food.

He reveals a present that he made for Dolce in the meantime. Using their leopard-patterned bed sheets and the bag of the girl who was with him, he created clothes and boots for Dolce. He has fun teasing Dolce and calling him handsome in his new clothes. Dolce then finds a candy hidden under the couch, much to Masago's surprise. He is about to eat it when Dolce stops him, wanting the candy for himself. Masago decides that they should settle it with dice, and whoever rolls the higher number gets to eat it. He rolls an 11, but Dolce ends up rolling a 12. Masago refuses to accept his loss, believing Dolce wouldn't know what the numbers mean anyways. He is about to eat the candy himself but Dolce snatches it from him and eats it instead. Dolce jumps away and a pot near him hits Masago's head. Masago tries going after him and hurts his hand on broken shards of the window. Noticing his own blood on his arm, he ends up licking it and thinks it tastes extremely good. He looks for the woman's corpse on the deck but only finds her foot remaining as sharks had eaten the rest of her body. Masago reveals that he had intentionally drowned her since the transmitter wasn't working and begins to eat her foot.[1] 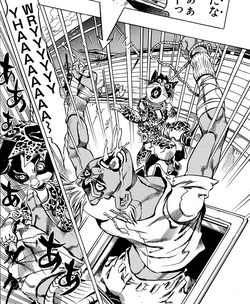 Seeing that his master went insane, Dolce tries hiding from Masago on the mast of the ship. Masago tries to lure him down with water, secretly carrying a knife behind him, but Dolce doesn't move. Masago becomes angry and starts climbing the mast, blaming Dolce for wasting his time, otherwise he could have gotten the girl's body before the sharks did. He claims how he always paid his taxes and wonders when the rescue team will come. He notices that if he starts climbing more, the mast will touch the surface of the ocean where the sharks are, so he makes it a contest of endurance to see who will climb down first. Dolce ends up falling asleep and later wakes up to see that Masago is missing.

As Dolce walks down, Masago suddenly emerges behind him and grabs his neck with a rope. He had tricked Dolce by chopping off his own fingers and positioning the fingers to hold the knife below the planks, making it look like he was hiding there. He then laughs at his victory and bites Dolce's neck to drink his cat's blood. Dolce suddenly starts talking and says that if Masago wants to eat him that much, Dolce will let him eat more. Dolce then dives into Masago's mouth as the man wonders if his cat just talked. Masago's throat is pierced from within by Dolce's claws and he staggers backwards into the shark-infested sea, while Dolce manages to escape.[2]