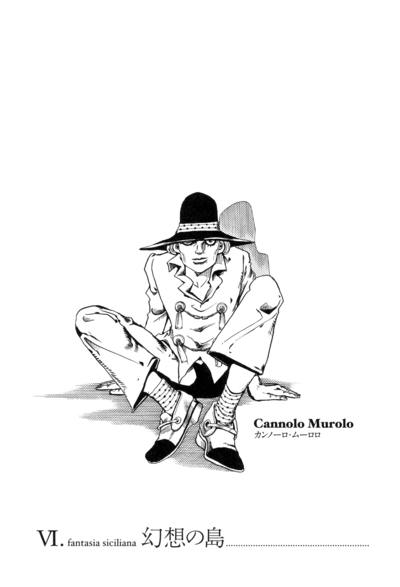 Due to Nightbird Flying's ability, Fugo is stuck in a hazy hallucination dreaming about the previous events in his life. While hearing Angelica's singing in the background, he dreams of an alternate version of his past, beginning from when one of his professors in Università di Bologna scolds him for not concentrating on his studies and for thinking that his education is solely for his parents' status rather than to unlock his own potential by himself. News arrives that his grandmother was brought to the hospital so his professor buys a train ticket for him - soon, the family is reunited again. While going out on a holiday fishing with his brothers, Fugo subsequently meets Bruno, later assisting Bruno's father Paolo in avoiding getting involved with the mafia drug trade. Fugo then saves Narancia from being wrongfully sent to prison and persuades Abbacchio to not accept bribes, saving his career as a cop. Both of them, along with Mista, join their team which was not tied to any syndicate. Trish, the daughter of "Passione Foundation", later brings a cake over after Bruno announces that their team will be working with the foundation. The hallucination ends when Fugo notices that Mista is strangely nonchalant about being the fourth person to take a slice of cake. He hears Kocaqi's voice before the ground shatters under his feet. As he falls into an abyss, he reaches out to the fake Trish to pinch her cheek.

In the real world, Sheila E is woken up accidentally by Fugo who had pinched her in his sleep. With the helicopter pilot dead after biting through his tongue and an incapacitated Murolo foaming at the mouth, Sheila E summons Voodoo Child and kicks both her and Fugo outside the helicopter. On the shore, she performs CPR on Fugo who immediately recovers. Fugo tells Sheila E that the attack may have been because Kocaqi had been hiding something from them in Ortygia. Nearby, Vittorio's celebration is cut off as Volpe and Angelica realize that Fugo and Sheila E are still alive. Volpe then advises Vittorio to stick to the plan and retrieve the Stone Mask before Passione can find it.

Fugo and Sheila E decide to steal a car and drive to Ortygia. During the ride, Sheila E tells Fugo that she already knew he was the one who killed Illuso when she had witnessed Kocaqi's painful death from Purple Haze's virus. She admits her weakness of not being able to fight someone "more right" than her and fears the day where she has to face Giorno whom she believes is more right than God. Their conversation is cut short when the local population is suddenly driven into colliding with their cars under Nightbird Flying's control. Fugo is then thrown out of the car by Voodoo Child as Sheila E wanted to split the team and sacrifice herself. While a weakened Angelica goes to look for Fugo, Sheila E finally meets Volpe on the road. She tries to run over him, but Volpe, using his Stand Manic Depression to power himself to the human limits, destroys the car instead. He reveals the reason to find the Stone Mask - to overcome his weakness and achieve immortality.

Meanwhile, in the Cathedral of Syracuse, Vittorio retrieves the Stone Mask, but it is stolen by Murolo who emerges unharmed from Nightbird Flying's attacks earlier. Vittorio uses Dolly Dagger to slit his own throat and reflect the damage to Murolo, but surprisingly, no damage comes to him. Murolo destroys the Mask and reveals the true nature of his All Along the Watchtower to divide the damage of incoming attacks to him by fifty-three. He also reveals that destroying the Mask was a secret part of the mission, an agreement between Passione and the Speedwagon Foundation to stop the menace. As he attempts to redeem Vittorio, the latter only stabs himself repeatedly, killing himself in the process. Murolo then gazes at the entrance of the church and wonders where Fugo and Sheila E are.

(Ability only)
Rainy Day Dream Away