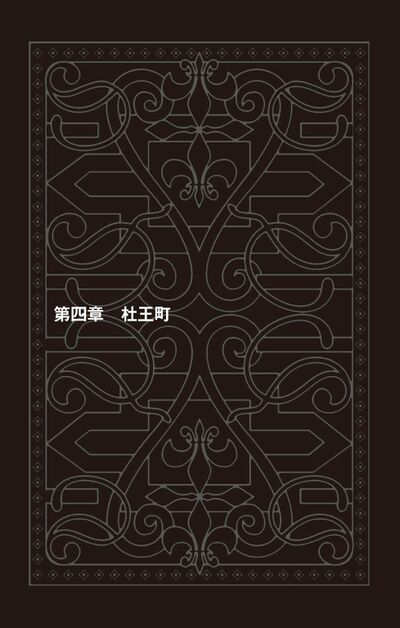 Chapter 4: Morioh (第四章・杜王町, Daiyonshō Moriō-chō) is the fourth chapter of JORGE JOESTAR, a light novel based on the JoJo's Bizarre Adventure series.

Jorge Joestar heads from Nishi Akatsuki to Morioh, wondering how Tsukumojuku arrived there. Tsukumojuku's body was found with a deep slit in his throat and a broad axe slung over his shoulder. He was naked, wrapped only in a diamond-shaped red cloth, and was also mounted on a bear. His deathbed was designed to resemble the folk tale Kintaro. Jorge gets off the train at Morioh Station shortly after 1 PM, feeling a sense of déjà vu when he looks over the map of the town. However, Jorge is sure that he has never been to Morioh before as the famous Namahage Detective would usually handle cases there. Nearby the station, Jorge hears an election campaign for Takumi Kumoi, aiming to become Morioh's next mayor. He stops by a restaurant and has a Miso Tongue Meal, one of Morioh's local delicacies.

Jorge heads for the Arrow Cross House where Tsukumojuku's body was found. As Jorge's taxi arrives there, he meets Rohan Kishibe (Universe 37), a manga artist in his thirties who had a manga called Pink Dark Boy in serialization for twenty years, and had recently started part eight of the series. Rohan mentions that he had purchased the Arrow Cross House six months prior, frustrated that his house was already used for a murder like some cliché story. Rohan then lectures Jorge that he should only call him "Rohan" rather than "Kishibe-san" or "Kishibe-sensei". Jorge hesitates so Rohan uses his Stand Heaven's Door to prevent Jorge from calling him anything else besides Rohan.

Rohan describes the mystery of the Arrow Cross House. It suddenly appeared five years ago without any of the neighbors noticing it being built despite its large size. A different house was in the same location for three years, before the Arrow Cross House appeared. The old house was called Cube House by locals in the area and was supposedly moved to Morioh from Nishi Akatsuki, although nobody knew who owned the house. Rohan mentions how more than one detective was murdered in Morioh. The first was Sachiari Hakkyoku, whose body was found seated on a giant stuffed sea turtle, designed to resemble Urashima Taro. Nekoneko Nyan Nyan Nyan was next and was found near Angelo Rock, surrounded by stuffed dogs, cats, and pheasants. Her death resembled the Momotaro folk tale.

Rohan takes Jorge to the scene of the locked room murder. The police had taken away Tsukumojuku's body, but the bear was left behind as it was too large. Rohan shows Jorge copies of the crime scene photographs that he had the police leave behind, leading Jorge to wonder how Rohan was capable of having everyone listen to his orders as if he could bend the world to his will. The two wonder how someone managed to bring a giant polar bear into the room without Rohan noticing. Later, Rohan tells Jorge about Reimi Sugimoto (Universe 37), a girl who remembers nothing aside from her name. Her amnesia is so severe that Rohan can't read her past, so Rohan has her help look after the place until she recovers her memories. On that night, Reimi and Rohan mixed up their bedrooms and slept in each other's rooms. Rohan shows the exact locations of each murder case on Jorge's map, and Jorge realizes that the triangle of dead detectives matched the exact shape of the Bermuda Triangle.

Rohan explains what Stands are and what his Stand could do, explaining that Morioh has several Stand users who are drawn to one another. Jorge tries to mention Yoshikage Kira's name, but suddenly forgets it. Rohan had used Heaven's Door to prevent Jorge from saying Kira's name aloud or else Jorge would explode. Suddenly, the doorbell rings and Rohan asks Jorge if he can get his visitors to leave. He flees the room, asking Reimi to come with him. However, Jorge could not see Reimi there and only saw Rohan leaving alone. At the door, Jorge is greeted by three high school students who are his age. They confront Jorge assuming he did something to Rohan, mentioning that nobody had seen Rohan for two weeks. One of the thugs grabs Jorge's throat with his Stand, while his twin brother looks toward the house and starts yelling for Rohan. The third student observes Jorge's actions. Fukashigi mentions that it's possible that Jorge could actually be Yoshikage Kira pretending to be a detective. As soon as Fukashigi says Kira's name, he disappears, and his brother Muryotaisu runs around looking for him. Muryotaisu is about to attack Jorge assuming he did something, but Jorge exclaims that he'll find Fukashigi.

Jorge deduces that Reimi is actually a humanoid Stand who could control the Arrow Cross House, and used her ability to hide Fukashigi. Accepting Jorge's request, Rohan uses Heaven's Door on Jorge so that he could see Stands. Muryotaisu's Stand is named Grand Blue, appearing as three dolphins. Koji's Stand is Blue Thunder, a propeller that appears on his head. Koji mentions that Fukashigi's Stand is NYPD Blue, a Stand that believes it's a police officer from New York. Jorge could finally see Reimi and the two introduce themselves to each other. Jorge then asks Rohan to use Heaven's Door on Muryotaisu and Koji, allowing them to see "astral projections". Reimi's ability allowed her to keep Rohan and Fukashigi in a suspended state between life and death beneath the Arrow Cross House. As there is no oxygen in that area, they would not explode from Kira's ability. Jorge realizes that each arrow on the house could rotate, explaining why Rohan did not notice anything happening after Tsukumojuku's murder.

Suddenly, Morioh has an earthquake and a chasm opens along its borders. Koji flies into the air with his Stand and reports that Morioh somehow detached off of Japan and became its own island, sailing on the sea. Just then, Rohan also reveals that he had read Jorge's pages from Heaven's Door. All of Jorge's adventures as a detective were listed under a heading titled "Forgery". Behind Jorge's left ear, Rohan found his true story. He was born in 1889 in the Canary Islands, became a pilot, fought in World War II, and then was murdered in 1920 by an air force general.

(Ability only)
Bites the Dust