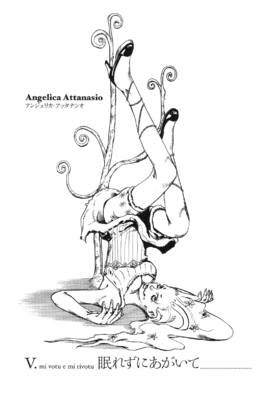 After learning of Kocaqi's death, the Sezione Droghe decides to go retrieve a Stone Mask in an old Nazi bunker to power Volpe up. Meanwhile, Fugo, Sheila, and Murolo track them up to Ortygia, Syracuse. On the way, their helicopter is attacked by Angelica Attanasio's Nightbird Flying, which incapacitates the pilot, Murolo, Sheila, and Fugo, sending their helicopter into the sea.