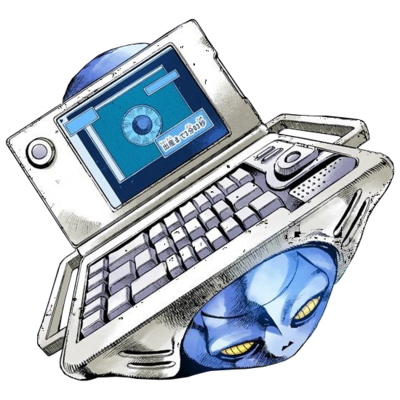 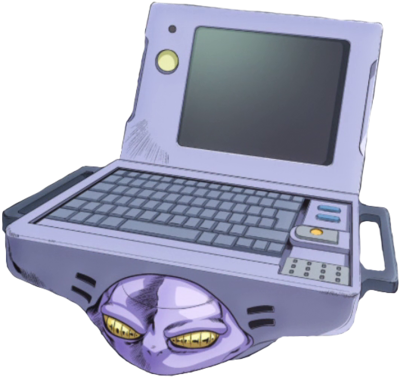 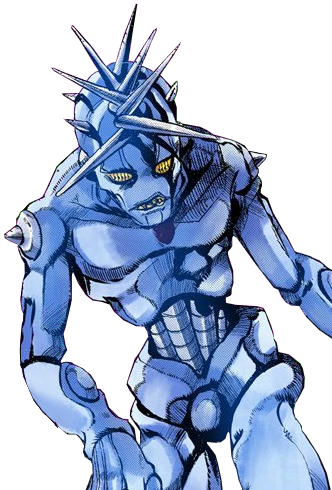 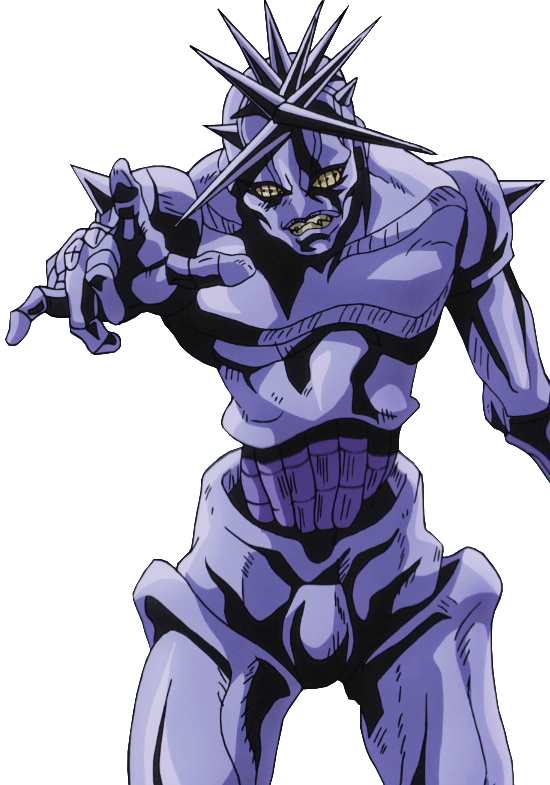 Baby Face (ベイビィ・フェイス, Beibyi Feisu) is the Stand of Melone, featured in the fifth part of the JoJo's Bizarre Adventure series, Vento Aureo. 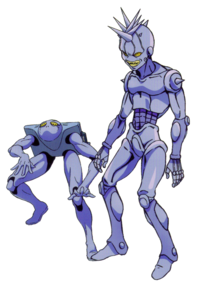 The junior it generates takes the form of a humanoid with a modified mohawk on its head, made from spikes. Its midsection is composed of several cables attaching the two halves of its body. Its appearance was designed to resemble an evil version of Echoes ACT3, giving the image of a demonic boy.[1] It begins with the proportions of a child, but it can experience "growth spurts" which give it a more mature appearance.

The series is known for alternating colors between media, the information presented below may or may not be canon.
Body(Blue)
Eyes(Gold)
Body(White with light green spikes)
Eyes(Light Green)
Body(Periwinkle)
Eyes(Yellow)

While Baby Face itself has no personality to speak of, the junior it generates is an independent Stand with separate sentience from its user. Since it is born with intellect but no knowledge, it requires proper education to ensure positive growth; otherwise, it will become disobedient and uncontrollable.[2]

Through its computer Stand, Baby Face has the ability to generate a secondary Stand that will fight in its place.[2] By researching a suitable subject through the pseudoscience of examining a woman's characteristics, Melone gathers information and predicts the future junior's predispositions. Some traits that are identified include the woman's age and health (used to determine the physical strength of their "child"), their blood type and horoscope (which determine their "compatibility" with Melone's target; a poor compatibility leads to an aggressive "child"), and their preferred sex positions from the Kama Sutra (the relevance of this is unknown). If the data predicts a child suitable for his purposes, Melone unleashes Baby Face on the woman and impregnates her with Baby Face's child through undisclosed means.[3]

Though the child is progenated through undisclosed means, it is stated that the insemination holds no similarities to human reproduction; upon waking up post-Stand encounter, Baby Face's victim shows no signs of being raped.[4]

The development is fast, taking three minutes for a fertilized egg to fully develop into a new junior[3] that then appears near the host. The child also appears to develop within or around the mother's head, approximately towards the back. This is hinted at when Baby Face's speech seemingly originates from that point, and urine trickles down the target woman's neck when it relieves itself.

If Melone possesses a sample of a target's blood, he can incorporate it into the junior by placing the sample in a niche beside Baby Face's keyboard. The resulting junior will be able to sense the target's location and track them no matter the distance.[3]

In addition to generating homunculi, Baby Face can be used like a regular computer, capable of holding and interacting with the data gathered by Melone.[3] The computer Stand also maintains contact with the junior, as if Melone was having an online discussion with the junior's spirit. A webcam and microphone allow Melone to show the junior images and converse with it orally.[2] It also monitors the junior's status, allowing Melone to watch its growth.[5]

By generating a square-shaped vacuum, the secondary Stand is capable of breaking matter apart into cubes while keeping life forms alive.[2]

Although cubed people typically stay alive despite their condition,[10] Baby Face can weaponize its ability by removing key parts of the body like the throat.[8] It can also absorb the cubes for nourishment, although it is only seen using this on its "mother" to hasten its growth.[2]

The junior starts as a small baby able to hide inside someone's hair. Over a short period of time, it will grow both physically and mentally into a fully aged adult.[2] 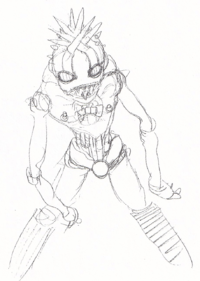