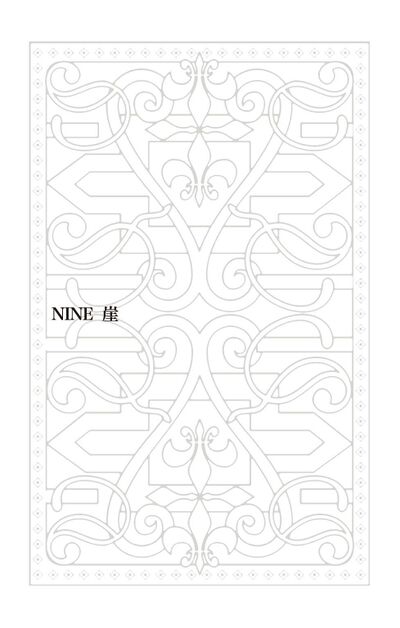 NINE: Cliff (NINE・崖, Nain Gake) is the ninth chapter of JORGE JOESTAR, a light novel based on the JoJo's Bizarre Adventure series.

For supposedly murdering Kenton Motorize, George is arrested instantly once he arrives home from Rome. Her father, Ben Motorize, pushes the blame onto George and strong-arms his friends in the justice department to charge George as an adult at age 16 with first degree murder. Penelope and Erina visit George in jail. While they are concerned at first, they are relieved once they find out George isn't too upset. After the guard brings George back to his cell, Lisa Lisa transmits her Ripple through the ground, inhibiting the guard's thoughts. The guard ends up following his normal routine of putting George back into the cell, locking the door, and then leaving, but his mind couldn't comprehend seeing Lisa Lisa or why there was a refrigerator in the cell. George was unaffected by the Ripple because Lisa Lisa gave him socks made from Satiporoja Beetles. Lisa Lisa had been secretly hiding in George's cell to keep him company. She brings him food, cleans the place, and teaches him things. At night, Lisa Lisa leaves and George thinks about Kenton.

Six days later, George is visited by Steven. George is worried to see him but Lisa Lisa convinces him to go. Steven says that he believes George isn't the murderer and he had tried to convince his father but Ben wouldn't listen. Before he leaves, Steven expresses hope that he could fly together with George someday. Days pass, and Erina tries her best to free George but he remains in jail. Kenton's death was too mysterious and George had an alibi of somehow being in Rome during that time. When George explained that he was in an underground temple, the Italian police went to go search for it. It was actually not officially discovered, and so the Italian government plans to give George an award if he is proven innocent, although George turns it down. The police doesn't know what to do about George's statement, as they have Faraday's testimony and proof of George being in Rome. Moreover, George had no motive to kill Kenton and the timing of the murder did not match up with where George was. According to the police's report, George picked up a knife from home, flew his Star Shooter glider to the Motorize manor, spoke with Darlington, snuck out of the house, flew his glider to the cliffs, and then stabbed Kenton to death. George denies this but the police already finished their report, and so he is allowed to return home. Lisa Lisa and George say their goodbyes to each other, as she has to head back to Straizo for work.

Back at home, George thinks about Tsukumojuku Kato and ponders about the future due to Japan's war with Russia. Later, George has to have a jury trial because of him pleading innocent. He can't go to school while the trial is going on, so Penelope becomes his tutor once again. Since he has more free time, George asks to get his driver's license. George would normally have to wait one more year before he could get his license, but Erina didn't care much and let George do as he pleased. George asks the man who drives Erina to work to teach him how to drive. He gets the hang of it quickly and eventually buys a car, a Rover 8. However, George then immediately takes it apart to see how it works. Since he didn't have a teacher like how he had Steven when he was making planes, he ends up breaking the car. Thus, he takes the car to an automotive garage in London and meets a college student named John Moore-Brabazon. John is a private mechanic to a man named Charles Rolls, and George is shocked to learn that John owns all seven cars in the garage. George grows fascinated watching John's handiwork, until John yells at George to stop staring at him. The two get into a fight when John throws a wrench at George's car leading to George attempting to run John over. John runs out of the shop and jumps into a working eighth car he had parked out front and drives away. They start a car chase through the industrial district, although it isn't much of a contest since John's car is twice as fast as George's. John drives in circles around George, insulting him and calling him childish names while George begins to cry. John laughs and then challenges George to a race through all of London. They startle horses and pedestrians along the way and start getting pursued by mounted police but manage to escape, heading back to the garage. The other mechanics are worried, but soon they all start laughing leading to John and George becoming friends.

George joins the Royal Automobile Club where John is a member. He describes John's handiwork to be like magic, as any car he fixes would run and turn better than before. When he races, he is less interested in winning than in enjoying himself to the fullest. As George is John's only younger friend, John quite likes him and often gets George into trouble. John says it doesn't matter if George killed Kenton Motorize or not, because soon all men will go to war and become killers. Two years pass and George graduates from Hugh Hudson High School in 1907 while still being under suspicion for Kenton's murder. Penelope and Erina plead for George to go to college but he refuses. George finally starts beating John in RAC races. John goes off to a circuit race in the Ardennes in Belgium. He drives a Minerva 600 kilometers in six hours, fourteen minutes, and five seconds and wins the race. Afterwards, John calls George to let him know that his boss wants to start working on planes next. Getting invested in airplanes once more made George want to speak with Steven again. As George couldn't just go to the Motorize home, he asks his mother what she knows. Erina reveals that Steven left home and is working in France somewhere, but she doesn't know anything else. Penelope angrily tells George not to get involved with planes as nothing good will come from it, and then she lectures him to not let his friends control his actions.

A few days later, Darlington visits the Joestar mansion. She apologizes for her sudden visit, but George leads her outside where they could talk, worried that Penelope might see her. Darlington asks if George remembers William Cardinal and then expresses regret over insulting George when she was younger. She says that Cardinal decided he wants to become a commissioned officer, as he might be a better commander than a doctor. Darlington asks for George's permission to say what was on her mind for the past two years and George confusedly agrees. Darlington then goes on a rant about how Cardinal is a better man than George and that George has a way of getting all the girls around him but doesn't pay attention to them, and he also doesn't realize that he's leading them on. They awkwardly walk back to the house in silence until Penelope loudly exclaims what Darlington thinks she's doing at their house. Darlington explains that she came there because her father found new evidence for George's guilt and says that George should look into the possibility of a plea bargain. Furious, Penelope begins summoning her locked room clown to kill Darlington, but George traps himself with her inside the walls. Darlington continues explaining that they found two witnesses: herself and Penelope. Both women saw George's plane fly away from the house but they kept quiet for George's sake. While Penelope might deny everything on the witness stand, the police also found alternative proof. When Penelope saw George's plane flying, she wrote a note congratulating George for his first successful flight. Frustrated that George wouldn't leave Darlington's side, Penelope leaves and goes back to her room. George is surprised that Darlington wasn't afraid of Penelope's powers but Darlington knew Penelope wouldn't actually kill her. She isn't the type to fall for a threat and Steven also has a similar ability. Darlington says goodbye, telling George to seriously consider the plea bargain as it is his best chance.

George doesn't know what to say when he sees Penelope crying in her room. As he thinks about accepting the plea bargain, Erina lectures George to not give up. Giving up would mean ruining the reputation of their family and their companies, as well as betraying the faith of his family and friends. Erina's words rekindle George's resolve and he becomes determined to find the real killer. Penelope offers to help, revealing that she had been investigating the murder for the last two years. At first Jorge wonders whether Tsukumojuku is the one who flew Star Shooter, but knew his friend would never murder Kenton. George and Penelope then head to the cliffs where Kenton died. George starts wondering whether Steven is the one who murdered Kenton. Kenton wanted freedom but their father would never let her have it. Their mother, Harriet Motorize, also killed herself on those same cliffs. Three days later, George discusses his theory about Steven to Darlington but she says that he has no proof. George threatens that he'll go find Steven and force him to confess if they're going to keep trying to frame him. Before leaving the Motorize manor, George asks Faraday about the boy who came to see him two years ago. While George saw the Japanese boy Tsukumojuku Kato, Faraday instead saw a terrifying Spaniard kid who had no eyes. He was too terrified to tell anyone.

One year later, George is cleared of all suspicion and joins the Royal Aero Club. John becomes the first Englishman to fly a plane the year after that. Another year later, in 1910, Charles Rolls dies in an airplane crash and John decides to never fly again.