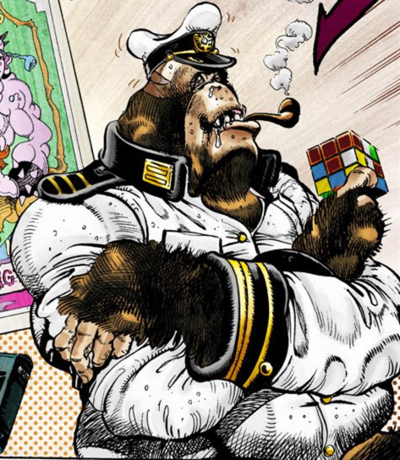 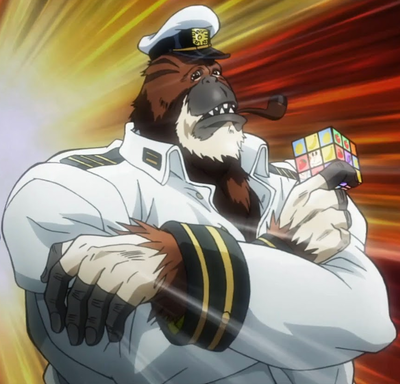 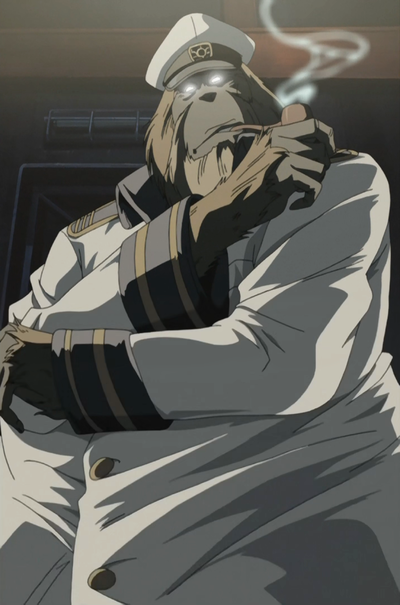 JoJo's Bizarre Adventure (SFC Game)
“
You're not a normal monkey, are you?
”
—Jotaro Kujo to Forever, Chapter 131

He is a malicious orangutan in DIO's service who confronts the group in the South China Sea aboard a freighter. Said ship happens to be possessed by Forever's Stand: Strength. 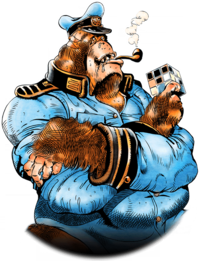 Apart from the two stripes or scars on each side of his head, there's not much to be said about Forever's appearance. He resembles a disheveled orangutan, though he does dress in a captain uniform after his Stand is revealed. Like a normal orangutan, Forever's strength is approximately 5 times greater than a normal person, enabling him to easily rip a person's arm off. Unlike most male orangutans, he does not appear to have prominent cheek pads or a throat pouch. His character design is presumably inspired by the super-intelligent yet malicious orangutan from the movie, Link.[2]

Forever also happens to smoke both cigarettes and a pipe.

A truly intelligent ape, but an arrogant and perverted one

Forever will sometimes act like a human being. He seems to be attracted to human females - he looks at pornographic magazines and seems to lust for Anne. He also smokes cigarettes and can cut his own apples, showing unusually high intelligence for an orangutan. Furthermore, he can read and quickly solve puzzle games, like a Rubik's cube.

These human abilities coexist with his brutal animal nature: he plays with his victims, confident of his control over the ship, but should his strong sense of pride be hurt, he loses his calm and quickly becomes violent. However, when Forever is cornered, he loses all confidence and begs Jotaro for mercy by showing his belly as a sign of defeat.

Like many other Stand Users from Stardust Crusaders, Forever is a henchman of DIO who has been ordered to kill Jotaro and his friends before they reach Egypt, where DIO lurks.

Forever's Stand is Strength, sharing its name with the tarot card. In its only display, it transforms a ruined yacht into a massive oil freighter, which the ape can then control at his leisure.

Forever is a particularly intelligent orangutan who, though unable to speak human language, can read, solve a Rubik's cube, and generally have coherent thoughts. 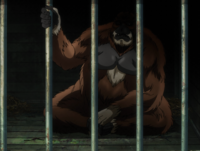 Pretending to be an ordinary orangutan

Forever is among the seven Stand Users deployed by Enya the Hag to assassinate the Joestar Group.

Forever confronts Jotaro and company at sea between China and Singapore on their way to Egypt, right after the confrontation with the Impostor Captain Tennille. Jotaro, his comrades, and Captain Tennille's seamen approach a large oil carrier and get aboard, only to find out that nobody is on the deck nor in the cabins. The only living being they meet is Forever, a seemingly normal orangutan, lying in his cage. After the death of one of the seamen, caused by the mysterious activation of a mechanical hook, JoJo's group begins to suspect the presence of a Stand user.

Attracted to Anne, Forever leaves his cage, kills all of the remaining seamen and ambushes the girl in the shower. He is stopped by Jotaro, only to quickly regain control of the situation by exploiting the fact that Jotaro and the others couldn't imagine the enemy Stand to be the entire ship. At the same time, he binds the whole Joestar Group, slowly crushing them in the metal of the ship. Immobilized by the evil primate, Jotaro manages to provoke his opponent by hitting him with a button from his uniform, hurting his pride and getting him in the range of his Star Finger.

Caught by surprise by the now unbound Jotaro, Forever begs for mercy. Jotaro refuses the ape's proposal, saying that Forever has rejected the rules of the animal world, becoming just as corrupt as a human being, and brutally beats him with a barrage of Star Platinum's punches. With Forever's incapacitation, the ship collapses, returning to the original wrecked boat it was, leaving the heroes free to continue their journey.

In the OVA adaptation, Jotaro remains incapacitated during the fight against Forever. Instead, Polnareff returns after Avdol left him for dead, and proceeds to slice Forever in half with Silver Chariot.

Forever was not given a proper name until several years after Part 3's publication, where it was revealed in the PlayStation port of Heritage for the Future and eventually documented in JOJO A-GO!GO!. The name is derived from a pun as the Japanese spelling for Orangutan (オランウータン, Oranūtan) encompasses the Japanese spelling for Wu-Tang (ウータン, Ūtan).

In the anime, he shares the same voice actor as Shigekiyo Yangu, Kappei Yamaguchi.

In the German dub, he shares the same voice actor as Noriaki Kakyoin, Daniel Käser.

The events from Strength occur in a different way. The Stand takes the form of a building instead of a boat, and the battle takes place in Japan instead of Singapore in comparison to the original story.

Forever appears as a mini-game boss during the SUPER STORY (featured only on home console releases).

His mini-game consists of the player shooting whenever Forever appears on the screen (the shots will represent Star Platinum's Star Finger). For defense, Forever will always throw random stuff at the player, such as fans, pipes or rocks. Anne, the runaway girl, also appears randomly on the screen; if the player hits her by accident, the life bar will be decreased.

Both Forever and Strength appear as two of the several characters who possess a Metal Striker in the game. Their FINISH MOVE makes the fan which was on the ship fly and cut the opponent.