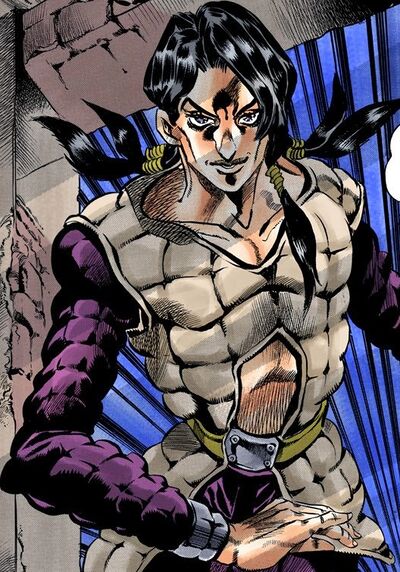 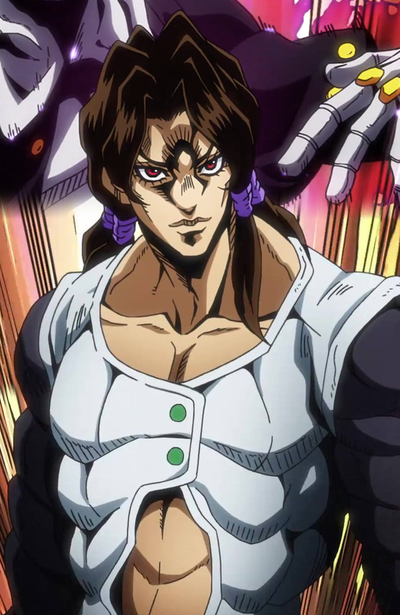 Illuso of the Mirror[1] (moniker)

Dissolved into pulp via Purple Haze

Illuso (イルーゾォ, Irūzō) is a tertiary antagonist featured in the fifth part of the JoJo's Bizarre Adventure series, Vento Aureo, specifically the "Man in the Mirror and Purple Haze" story arc.

A member of La Squadra Esecuzioni, Illuso faces Pannacotta Fugo, Leone Abbacchio and Giorno Giovanna in Pompeii in a race to grab an important key left by the Boss. He is a Stand User and exploits the mirror powers of his Man in the Mirror to ambush his enemies.

Illuso is a man of above-average height and slim to medium build. He has light-colored eyes and past shoulder-length hair tied into six pigtails. His outfit is entirely quilted: a vest with long sleeves with matching pants. With this outfit, he wears dress shoes in a similar style to Giorno's and metal cuffs on the sleeves. He also has on circular knee and elbow pads with straps and a belt with a square, metal buckle. Holes are cut into the outfit to reveal most of his abdomen and neck areas.

In some panels, his sleeves, instead of ending in metal, simply end in more quilted fabric colored a like color. His vest also changes details, such as having a flap with buttons that buckles it together or simply being one strip.

Main article: Man in the Mirror

Illuso was a member of La Squadra Esecuzioni, a team of nine assassins working within Passione. However, the team was frustrated they only received compensation for each kills while the rest of the gang was getting rich from the drug trade. One day their teammates Sorbet and Gelato disappeared while they were trying to investigate the Boss's past. They found Gelato choked on a gag in his house, with a piece of paper on which was written the word "punishment". Later, the team received the sectioned body parts of Sorbet encased in formaldehyde, showing the team the power of the Boss. They despaired of ever finding about the Boss. However, they then heard about Trish Una, and thought that she would be the key to discovering the Boss's Stand ability. The team rebelled and began searching for her. Just after Trish was taken in by Pericolo, La Squadra Esecuzioni ransacked Donatella and Trish's apartment in search for clues, missing a crucial picture of Donatella that was taken by the Boss himself.


Sometime before the main storyline, Illuso killed Sheila E's sister; it is unknown why. This spurs her to join Passione for revenge. Later on, Giorno mused at one point that while experiencing his slow and agonizing death, Illuso came to regret every decision and life choice he had made.

Illuso is first introduced when Abbacchio, Giorno Giovanna and Pannacotta Fugo go to the ruins of Pompeii. Ambushing them by using Man In The Mirror's ability to hide Illuso from sight in the Mirror World, Illuso singles out Fugo and drags him into the mirror world as Fugo tries to warn his comrades. After punching him, Illuso asks Fugo where Trish is and why the team is going here. Fugo refuses to answer and tries to summon his Stand, but Purple Haze is left out of the mirror world. Illuso thus attacks Fugo, intending to kill him and get the information of whoever will be his last target. Man in the Mirror freely pummels the helpless Fugo. Fugo tries his best to attack Illuso by smashing a wall and throw its pieces at Illuso but he effortlessly deflects them and sends them back at Fugo. Illuso approaches Fugo and then discovers Purple Haze's flesh-eating virus, eating a crow's corpse that has fallen from the sky. Unnerved, Illuso is safe from the virus nonetheless. Fugo attacks the mirror but Illuso then says that it's no use and attacks. However, he then hears footsteps. Realizing that Fugo's allies are going to their objective, Illuso lets Fugo leave and follows the sounds.

Illuso finds Leone Abbacchio near the mosaic dog and attacks through a mirror. Abbacchio kicks the mirror but Man in the Mirror can grab Abbacchio's arm through a shard of the mirror. He drags Abbacchio inside as the latter almost took a key but Abbacchio suddenly chokes his Stand. In truth, "Abbacchio" is Moody Blues disguised as Abbacchio. Moody Blues take the advantage in a short close-quarters fight. Nonetheless, Illuso manages to grab another shard and direct it at the real Abbacchio, who is half-dragged inside of the mirror while Moody Blues is half-rejected, immobilizing both. Illuso savors his position and threatens to push a glass shard in Abbacchio's mouth, but he realizes that the key has disappeared. Interrogating Abbacchio, Illuso is told that Moody Blues' hand is being rewinded back to Giorno, with the key. 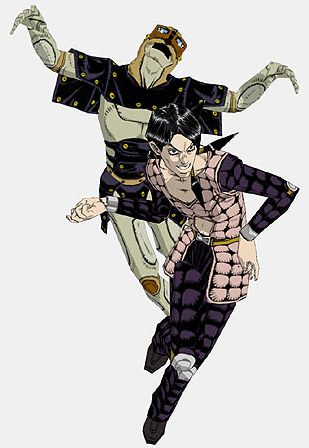 Cost: 0
After entering Stand Up, replaces a random normal Panel with an Illuso Box Panel.