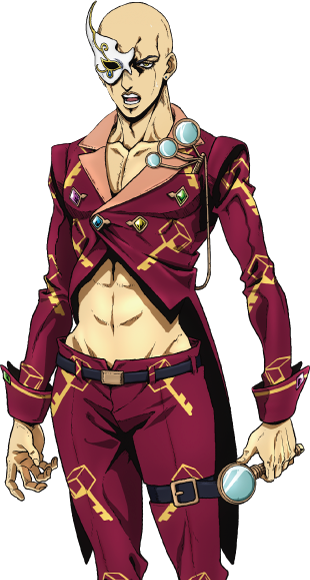 Scatola is a bald, slim, semi-toned man with yellow eyes. He has a large burn scar on the right side of his face, running below his eye. Scatola covers the scar with a curved white and gold venetian mask with a tear drop design.

His attire is comprised of a red, single buttoned tailcoat suit with a light orange collar and no undershirt. His suit displays a continuous orange-yellow pattern of a key with a cube attached to its top. The suit is also adorned with diamond buttons under the collar and on the cuff links, which are colored green, yellow, blue, and purple. There is a second belt strapped around his left thigh. He wears two dark blue pointed shoes with light blue translucent heels, as well as two blue earrings.

Accessories that he carries are a magnifying glass and a chained multi lens monocle that he keeps in his left breast pocket.

Scatola has a tendency of wanting to acquire beautiful things that suit his tastes.[2] He also has an unusual obsession with trying to break those who are emotionally strong. In particular, he takes pleasure in watching their faces at the exact moment they fall into despair.[3] This goes hand-in-hand with his Stand as he's able to force despair out of his victims when they turn into statues. He describes these statues as being "beautiful" or "magnificent".[3]

Hidden inside the Trappola Museum, Scatola's Stand allows him to completely encapsulate others inside transparent boxes. Those who are still trapped in the boxes after 60 minutes turn into statues and essentially become art showcases. Scatola uses this ability to capture Team Bucciarati.

Scatola lived in Sardinia. As a young child, he was loved by his mother. However, she no longer loved him after he got burned one day. He became more and more obsessed with beautiful things as he grew older. His Stand ability awakened while he was watching over his neglectful mother's face in her sleep. His mother became the first victim of his Stand, and the box in which she is trapped in is on display in the back of his storeroom.[2]

During the events of Vento Aureo, sometime after Team Bucciarati defects from Passione (before Abbacchio's death, but after Trish awakened Spice Girl), they awaken to find themselves trapped inside the Trappola Museum by Scatola. Using his Stand, The Shelter, Scatola is able to capture the group's Stands and store each one of them in a transparent display case. Hidden somewhere inside the museum, he explains to the group that they have 60 minutes to figure out how to free their Stands from the boxes lest they all turn into statues.[3]