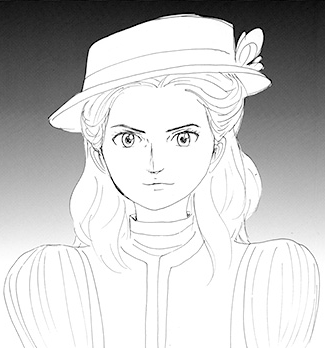 Dar (nickname from her siblings)

Lord Darlington (The Remains of the Day)

Eaten and turned into a Zombie by Antonio Torres[3]

Darlington is an acquaintance of George Joestar (Universe O). She initially has a crush on him but ends up marrying William Cardinal in the future. She is the daughter of Ben and Harriet Motorize, and the younger sister of Steven, and Kenton.

Darlington is a cute girl with long curly light hair.[1] She is slim and of average height. Darlington has thin eyebrows and wears formal clothing, including various types of dresses.

She initially has a sweet and gentle disposition.[2] However, compared to her siblings, Darlington can be vain and rude to George, mostly due to her initial crush on him when they are teenagers only to discover that George never noticed her in their class. She usually deflects topics when she doesn't want to admit something, such as when Kenton teases her about her crush. She blames George for forcing Steven to grow his wings and tends to take out her anger on her father as well as her butler, Faraday.

Darlington seems to dislike reading as she scowls when borrowing her father's books, but she's fine with doing so to impress George. Although George states that she doesn't seem like a heavy reader, she has all the books that he had read in the Canary Islands and also offers to loan him books that he hasn't read yet.

She is popular with the boys in her class, and because George is the only one not very interested, she stubbornly tries to get his attention. George thinks she treats him like the prize of a hunt, and she'll keep it up until she's satisfied, but he feels she doesn't exactly want to be with him. When Darlington learns that George is in love with someone else, she attempts to make him jealous by declaring she likes William Cardinal. She gloats about Cardinal's traits and indirectly insults George by mentioning that Cardinal thinks George is weird because of his opinions on a novel.[1]

After Kenton is murdered and Steven has to leave to France, Darlington quickly matures over the years into becoming intimidating and formidable. She apologizes for insulting George when they were younger, stating that she was a confused little girl. In spite of her apology, she chides George for having a way of getting all the girls around him without realizing it, and leading those girls on despite having someone he loves already.

Penelope de la Rosa angrily threatens to kill Darlington, but Darlington remains calm, not even afraid of Penelope's power trapping her as Darlington claims she isn't the type to fall for a threat. Darlington motivates and protects George in her own way, providing George with information about his court case and indirectly convincing him to find the real killer of her sister.[2]

Darlington was born in 1889 as the third child of Ben and Harriet. After George Joestar moves to England and attends Hugh Hudson High School, Darlington is in the same class as him.[1]

Darlington notices George arriving at her shed with her siblings and goes out to give them tea as an excuse for getting to know George better. She introduces herself to him, pretending not to know his name already, but is disappointed when George doesn't know who she is. She also gets upset after seeing Steven has his wings out, and blames George since it takes three weeks for it to heal. Kenton teases her since she never brought them tea before, but Darlington denies that she has a crush on George and angrily leaves.

In school, Darlington tries talking about airplanes with George but he changes the subject since he thought the other kids may pull pranks on them. Instead, they start talking about novels. George is surprised to learn that Darlington had all the books he acquired on the Canary Islands, and Darlington also offers to loan him more books. However, Kenton reveals that Darlington was merely borrowing all of them from their dad's library so she could have something to talk about with George. Darlington sets up a date for George to arrive at their house so she can loan him books.

When George arrives at their manor, Darlington brings him the novel Heart of Darkness and then suddenly asks if he's in love with anyone else. George declines, but Darlington responds by claiming that she's in love with William Cardinal, a boy two years older than them who is smart and will become a doctor someday. Darlington then states that Cardinal thinks that George is odd because of his opinion on a novel. George tells Darlington to use her own words if she wants to criticize him rather than saying what Cardinal thinks about him. Surprised about George's anger, Darlington apologizes but says he can leave their house then, and George agrees.[1]

After George leaves, Darlington sees his Star Shooter glider fly to her house at 3:30 PM. About half an hour later, Kenton is murdered and George is the prime suspect. Darlington does not see him again until two years later.[2]

Darlington visits the Joestar mansion. She apologizes for her sudden visit, but George leads her outside where they could talk, worried that Penelope de la Rosa might see her. Darlington asks if George remembers William Cardinal and then expresses regret over insulting George when she was younger. She says that Cardinal decided he wants to become a commissioned officer, as he might be a better commander than a doctor. Darlington asks for George's permission to say what was on her mind for the past two years and George confusedly agrees. Darlington then goes on a rant about how Cardinal is a better man than George and that George has a way of getting all the girls around him but doesn't pay attention to them, and he also doesn't realize that he's leading them on. They awkwardly walk back to the house in silence until Penelope loudly exclaims what Darlington thinks she's doing at their house. Darlington explains that she came there because her father found new evidence for George's guilt and says that George should look into the possibility of a plea bargain.

Furious, Penelope begins summoning her locked room clown to kill Darlington, but George traps himself with her inside the walls. Darlington continues explaining that they found two witnesses: herself and Penelope. Both women saw George's plane fly away from the house but they kept quiet for George's sake. While Penelope might deny everything on the witness stand, the police also found alternative proof. When Penelope saw George's plane flying, she wrote a note congratulating George for his first successful flight. Frustrated that George wouldn't leave Darlington's side, Penelope leaves and goes back to her room.

George is surprised that Darlington wasn't afraid of Penelope's powers but Darlington knew Penelope wouldn't actually kill her. She isn't the type to fall for a threat and Steven also has a similar ability. Darlington says goodbye, telling George to seriously consider the plea bargain as it is his best chance. When George considers giving up and accepting the plea bargain, Erina informs him that Darlington's purpose for coming there was so that George doesn't give up. She wanted to alert him about the new evidence and also subtly hinted for George not to give into a threat.[2]

Darlington's father loses his desire for business after the case with Kenton becomes impossible to prosecute further. He retires to Miami and with Steven fleeing to France, Darlington becomes the official heir of the business.[4]

George obtains a photograph of Steven's Motorizing plane in England and wonders what he is doing there. George interrogates Darlington about Steven's plane and she's surprised to learn that George had become confident. She hesitates for a long while and then deflects the topic, asking if George thinks it's possible for the dead to come back to life. George knew it was somewhat possible by becoming a zombie, but lies and says it isn't. Darlington agrees with him but says that there are cultural and religious precedents of resurrection which several people believe. She explains how Steven and Ben researched in several countries and learned everything surrounding the Joestar family, Dio Brando, the Stone Mask, and the Ripple warriors. Darlington teases George for being in love with Lisa Lisa, ultimately understanding why George never showed interest in herself or other girls.

She pleads for George's help because Steven and Ben have gone too far in their desperate attempts to bring back Kenton. George says he'll contact Lisa Lisa and assures Darlington that her group is composed of trustworthy people who would help Ben and Steven change their minds. Darlington cries and thanks George. He considers hugging her but decides it would be best not to. Just then, William Cardinal arrives at the door and Darlington introduces him to George as her fiancé. Darlington invites George to their wedding but George declines thinking he wouldn't feel welcome there because of his history with the Motorize family, and Cardinal confirms by saying George is correct. Cardinal tells George to never visit their home again, as he tends to be a bad influence there. George and Darlington say goodbye to each other, but George notices how weak and depressed Darlington appeared as soon as Cardinal arrived.

Darlington as a zombie

George heads inside the Motorize manor when Steven is mysteriously absent from his wedding. Upstairs, he discovers that Darlington was murdered along with her entire family by Antonio Torres, who also turned them into zombies. She is presumably put to rest by Lisa Lisa and Penelope after they arrive at the Motorize home.[3]