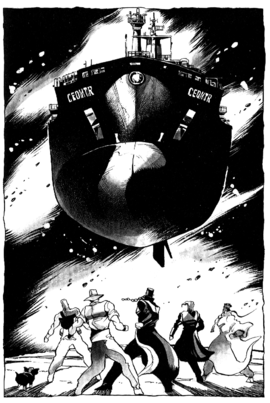 [1] (Tommy James and the Shondells

Dark Mirage (ダーク・ミラージュ（闇の蜃気楼）, Dāku Mirāju) is the Stand of Michal featured in the "One-Way Trip from the Desert to Hell City" chapter from the novel The Genesis of Universe, based on Stardust Crusaders. It is a humanoid, crystal-shaped Stand that can materialize mirages.

Dark Mirage is a Stand with the appearance of a 2 meter transparent, crystal-shaped, humanoid body with a big lens condenser

fitted on the chest, the lens focusing sunshine in a rainbow-colored light.

The Stand, like its user, is mute, because of past wounds suffered by the user in the throat.

Mirage Materialization: Dark Mirage is a Stand that can materialize mirages and manipulate them on free scale, as well as turn them into reality. The materialized mirages can be used to attack. However since the Stand requires light in order to activate its powers, it becomes powerless in absence of light, e.g. at night or in the middle of a sandstorm.

Despite being turned into real objects, the materialized mirages can still defy the laws of logic: for example, the Stand can create flying oil tankers and floating castles.